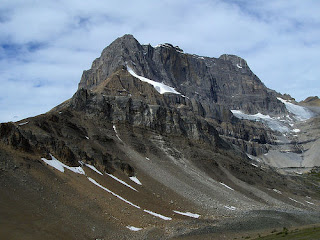 
The Sawback Trail follows the rugged Sawback Range from the town of Banff to Lake Louise over a distance of 74km (about 45 miles). The trail is rated moderate to challenging.

On Day 11 the hike leaves the Skoki Lodge for a final trip to Fish Creek parking lot above the town of Lake Louise with a side trip to Hidden Lake covering a distance of about 18.5km.

The hiker takes the trail back over Deception Pass. 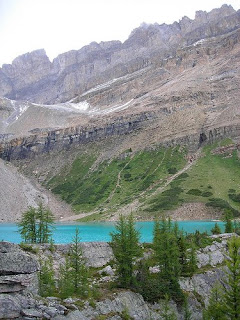 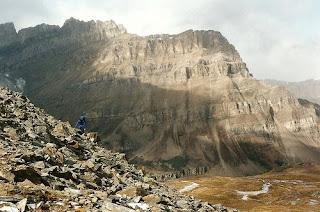 The trail back to the Junction where it intersects with the trails to Baker Lake is 4.0km going through sparse forested areas and treeless meadows past Redoubt Mountain and the western end of Ptarmigan Lake. For a view of the bottom of Deception Pass looking south to Redoubt Mountain here. 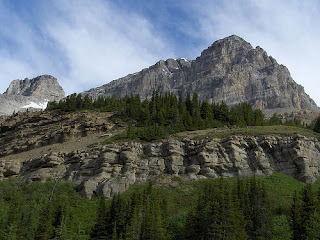 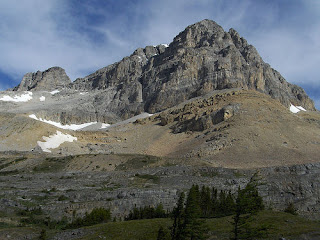 From Boulder Pass the trail goes steady down hill for 1.5km to the Corral Creek meadows where there is another junction at the 66.9km mark. 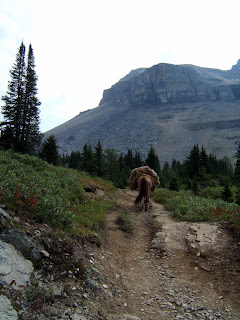 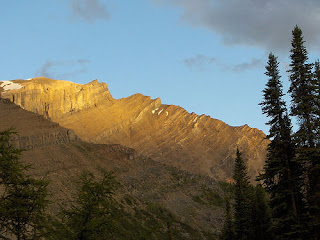 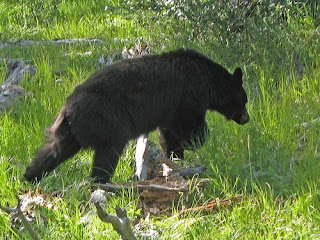 
A side trip of an added 2.6km return to Hidden Lake is well worth the effort. The trail passes the Hidden Lake Campground (Sk5) at 0.1km then makes a steady climb up a vale to the lake where the forest gives way. 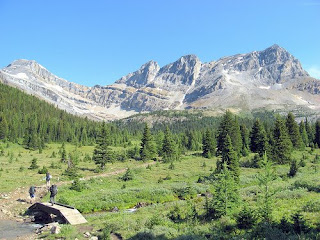 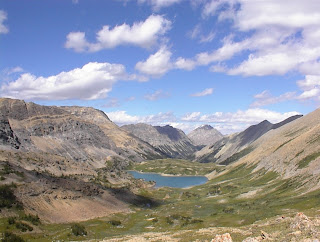 Upon returning to the Junction, 100m south is the Halfway Hut sitting on a low bluff. The hut built in the 1930s had received its name from the early days of skiing when it served as an overnight location from the Lake Louise train station to the Skoki Lodge. Now it only has a day use. 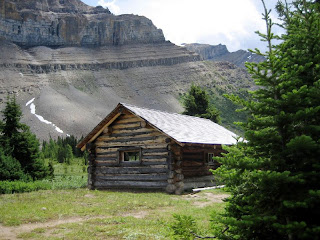 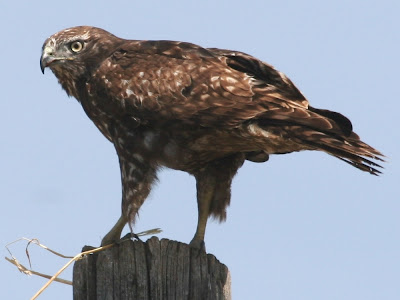 
The Red Tailed Hawk has a wingspan of 50 inches, preferring a habitat of open woodland, plains and prairies. They build nests 75 feet above the ground, laying 1-4 whitish eggs that are incubated for 27-33 days. 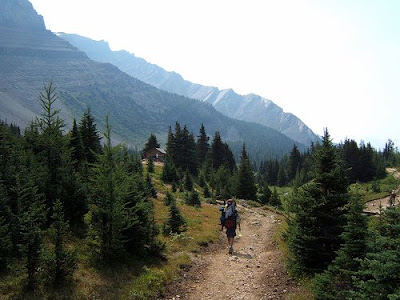 
The trail now goes through forested areas of spruce, fir with small areas of larch,. Here the trail is wide and graded for the commercial horse trips and packtrains supplying the Skoki Lodge. 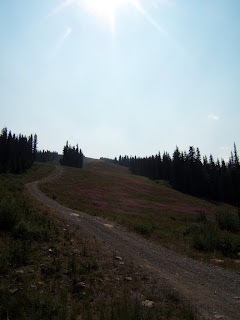 Then the trail proceeds downhill over a long meadow slope for 200m to Temple Lodge (2010m) and the ski lifts at the 70.1km mark. 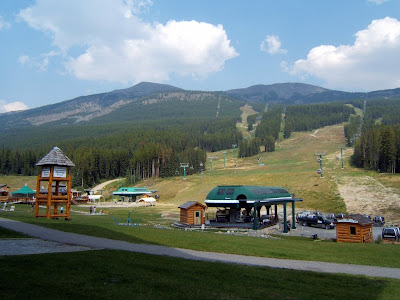 From here there is a 4km long gravel service road to the Fish Creek parking lot (1690m) where the 74.0km mark is finally reached.

This is incredible. I'm ready for a hike!! Did you encounter any Grizzly Bears?

Skoki Lake looks very blue in the photo. Is it like that? If so, do you know what makes it that color?

Once again, thank you for sharing the experience. It brightens my day.

Such a beautiful place.

Oh man, I would so love to be at hidden lake.

I love the rugged, rocky crags today, Barbara. The picture of the hawk is so striking, as is the one of the grizzly bear. Thank you for sharing more of Canada's beauty with us today.

Steve, as far as I can recall I have never seen a Grizzly bear in the wild, only variations of Black bears. The latter at a distance, although during my young childhood years other visitors to the Canadian Rockies would feed black bears from their cars. Shortly after ParksCanada brought out pamphlets with warnings.

The blue colour in the lake is from the minerals in the sediment that enters the water each spring when the snow and ice melts.

Leah, I know the mountains have a pull for you as they do me. Anyone who lives near them is truly blessed.

Charles, I don't know if there are any fish in Hidden Lake as it is more like a tarn than a true lake.

Teresa, the ruggedness of the mountains shows a stark beauty of the area. Every year the trees make further progress into the areas where there were mainly meadows.

These are some beautiful pictures !! I loved the location..Thanks for sharing..Unseen Rajasthan

doesn;t get any better than this, Barbara.

Barbara these are beautiful views. I been there before, but we just drove by, and that was inspiring enough. Unfortunately I wanted to see bears, but we got goats and deer which was nice to see. Excellent imagery again. Canada has so much to offer. Anna :)

Rajasthan, every area in the mountains has a picturesque look to it. I'm glad to know you liked this virtual tour.

Cloudia, and their souls beat strongly.

Anna, the driving through is lovely, but sometimes you have to stop, stay a few days to wander in the woods. A good place for that is at Lake Louise which will be covered in an upcoming post.

I want a Deception Pass in the world of my w-i-p now. Or a Deception Something. That's just a fascinating name.

And the photograph of Hidden Lake makes me want to visit it - me, who's most comfortable indoors and warm with a cup of tea and the Internet. :)