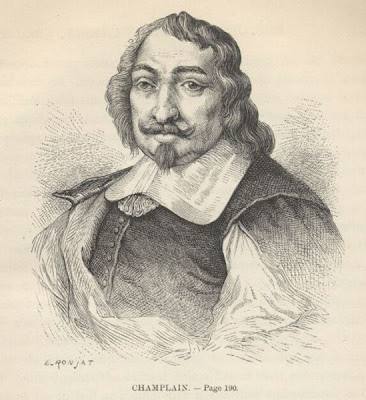 In the spring of 1608, three ships left the French port of Honfleur, one of them, the Don-de-Dieu (the Gift of God), commanded by Champlain. 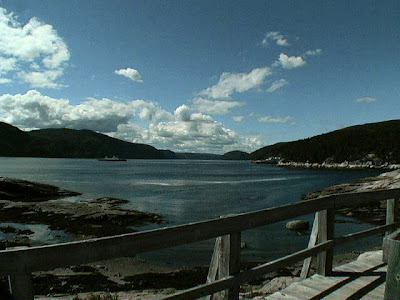 [2-Tadoussac by Bete a Bon-Dieu]

In June, the small group of settlers arrived at Tadoussac (photo). There, they left the ships and continued to Quebec in small boats. In Algonquin, “Quebec” means “the place where the river narrows”. On July 3, 1608, Champlain and a party of workmen landed at the foot of Cap Diamant, the rock that now dominates Quebec City to build a cluster of fortified buildings: three main buildings (each two stories tall), to which he referred collectively as "l'Habitation", and also a moat 12 feet (4 m) wide. This was to become the city of Quebec. Twenty of Champlain’s twenty-eight men died the first winter.

The native nations of Canada had since the early 1500s traded furs for iron axes, copper pots, cloth and decorative beads brought by visiting fishermen and traders. For control of this trade, they had fought bloody wars, which by 1600 made the St. Lawrence valley a no-man’s land hotly contested by two Native Alliances.

The most powerful were the Huron Confederacy on the Georgian Bay shores of Lake Huron. The 20,000 Huron (or Wendat, as they called themselves) resembled the Iroquois in their language, agriculture and sophisticated politicial confederacies. The Huron and Iroquois Confederacies were long standing rivals for power and influence. The Huron Montagnais who were hunting and gathering tribes were most familiar with the French. 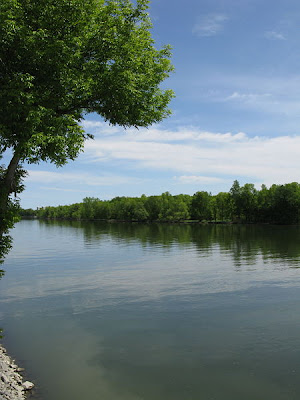 [3]
The French persuaded the Huron that a permanent French presence would be a bulwark against their rivals. For Champlain to see his colony grow and survive, he demonstrated its usefulness to his Native allies, the Montagnais, and in July 1609 he set forth to aid them by making war on the Iroquois. He was accompanied by 9 French soldiers and 300 hundred Algonquins and Hurons to explore the Rivière des Iroquois (now Richelieu River) (photo) when he subsequently mapped Lake Champlain. Having had no encounters with the Iroquois at this point, many of the men headed back, leaving Champlain with only 2 Frenchmen and 60 natives. 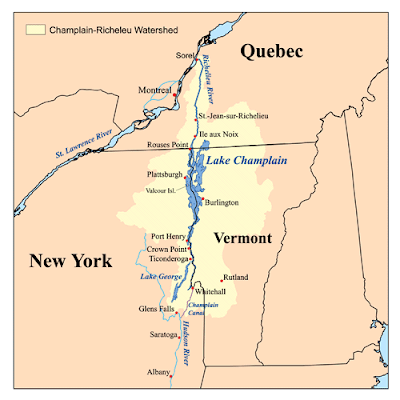 
Encountering rival Five-Nations Iroquois on the shores of Lake Champlain, the Algonquins and Hurons prevailed in a brief battle. Champlain assisted by using his firearm, a clumsy arquebus, [photo] to intimidate the enemy. His first shot killed three Iroquois leaders, resulting in victory and an established presence for security of trade on the St. Lawrence River. The French and Huron became close partners for the next one hundred years.

[5- The arquebus (sometimes spelled harquebus, harkbus or hackbut; from Dutch haakbus, meaning "hook gun") is an early muzzle-loaded firearm used in the 15th to 17th centuries. In distinction from its predecessor, the hand cannon, it has a matchlock. Like its successor, the musket, it is a smoothbore firearm, but it is lighter and easier to carry. It is a forerunner of the rifle and other longarm firearms.]

After this expedition, he returned to France in an unsuccessful attempt, with the Sieur de Monts, to renew their fur trade monopoly. They did, however, form a society with some Rouen merchants, in which Quebec would become an exclusive warehouse for their fur trade and, in return, the Rouen merchants would support the settlement.

He was also integral in opening North America to French trade, especially the fur trade, more particularly the beaver felt hat which became popular as a staple of commerce. The beaver hat remained firm, waterproof and durable in any shape or style.*

CONTINUED
Posted by Barbara Martin at 00:43

I learn a lot here Barbara. Thank you very much. All this is completely new to me. What it would be to travel back in time to see and hear these things.Anything to do with the fur trade would leave me squeamish and incensed however.Practicalities are warmth I guess.I can imagine that much in that time would be quite barbaric and cruel. It is certainly fascinating what you research and find, and although factual, all fuel for the imagination! Thank you for your visits and comments.

My goodness; how interesting. I can envision a terrific historical fiction piece set in this wonderful, raw era. What a fascinating trip back into time.

As aside: My dad was an electrician who worked on the St. Lawrence Seaway back in the day. Very cold in upstate New York. I went to school with French Canadian children whose families moved into New York. D

Thank you for a wonderful insight into your country and it's history.

The photos that I really liked were the reflections in the water in the other blog submitted futher down the page.

Thank you for posting comments on my blog about the Humber River in the UK.
Brian

I remember the movie Black Robe about the early French settlers along the St Lawrence. I drove across the (US) top of Lake Champlain recently, and whereas it had once been a fairly free and open border crossing, for hunters, walkers and boaters, it sure is tight now.

I was home schooled back in the day. Once my younger sister did a report on Champlain and it took her forever--mom kept giving it back to her to fix or add more...all kinds of stuff (in addition not instead of moving ahead in other projects). I had dreams of Champlain (although I think she had nightmares).

I thought I'd heard enough about him to last a lifetime, but this had much more interesting information than topical for a jr high report. I love the images that you found. I thank you for reviving my interest in Champlain.

I shall send this along to my sister. :)

Pam, there are many aspects that we would see as inhumae and cruel in an era that accepted it as commonplace. There are a few locations on earth where the wilderness is virtually untouched by humans: but would you really want to go there?

Donnetta Lee, for a truly effective piece of fiction I think a few years or a couple of decades would be better, as there would be more people and women would be present.

I spent several winters outside of Montreal and acquired frostbitten fingertips one year. I now wear special mittens to keep my fingers warm as once a person has experienced frostbite, it can occur easier the next time.

Brian, you're welcome and thanks for stopping by.

Gary, I've used that border crossing in the past too, though many years ago. Funny you should mention the movie, Black Robe. I noticed it on the discount table the other day at an HMV store and nearly picked it up.

Lauren, history can be quite dry, so I try to keep it brief with photos to ease the eyes.

This is really interesting, Barbara. I homeschooled my kids, and we learned about Champlain together, but the story about the Hurons and the Iroquois is new to me. I also liked the factoid about the beaver hats. Thanks for the information.

Teresa, now that you have mentioned the lack of history in the Canadian aboriginals, I will prepare some posts about them. They have a fascinating history before the Europeans ever arrived in North America.