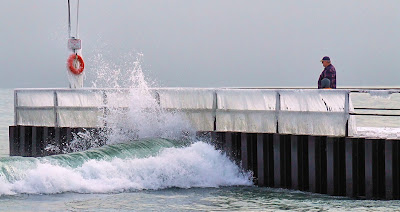 [1-Watching the waves from the pier - click to enlarge]

This 62.8 acre park is located on the banks of the Etobicoke Creek where it flows into Lake Ontario. The First Nations people frequently visited the area and named the creek Etobicoke which means “place where the wild alders grow”.

What are these two guys looking at? 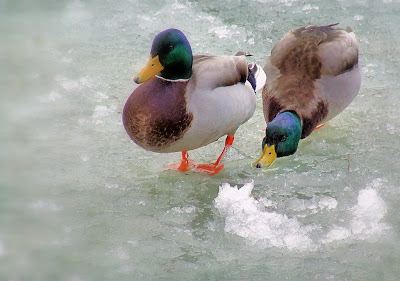 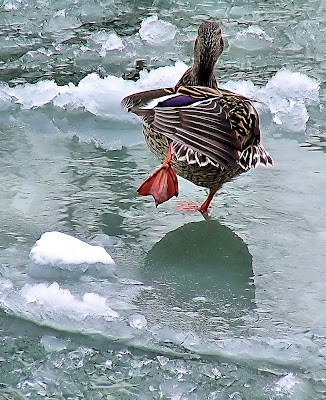 In 1954 after Hurricane Hazel devastated a number of low-lying properties, the park was created. Further parkland was acquired from nearby municipalities and the governments of Ontario and Canada. 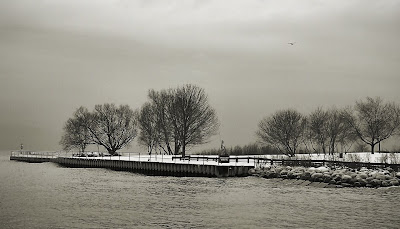 
The park is named after Marie Curtis, a reeve of Long Branch, to commemorate her outstanding contributions to municipal government in the village of Long Branch and the Municipality of Metropolitan Toronto from 1953 to 1962. 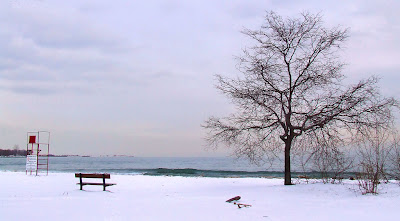 Travis Erin from Amarillo, Texas is the founder of My Town Monday. For other locations to visit please visit Travis' site here.

There have been requests as to the location of this park, here is a map taken from Google maps for your ease of reference. Or an aerial map here.

The ducks (and photographs) are beautiful, but looking at that ice reminds me of walking to campus during a Chicago winter. Brrrrrrr!

I do love ducks!

LOVE the photos of the ducks. But, baby, it looks cold up there! And, Barbara, I'm commenting at a reasonable hour too. Are we both destined to get our beauty sleep tonight!?

Two guys one gal. A fight is bound to happen.

Travis, I hope you're wrong. When male ducks fight over a female, they sometimes lose track of their original objective and drown the female in the process.

Thanks for another slice of the great outdoors. I'm with Teresa, that photo of the duck with cold feet is a winner.

Waves against the pier are very impressive and the mallards are beautifully coloured. We have the same mallards here and they are always begging for food when we have ice.

If you love snow and ice and cold water, then this would be the place to live. Wow. It does look like a cold place on earth.

Thanks for the visit and comment. It is appreciated.

There is nothing nicer than a duck.

If I am correct, I drove right past this when I was in TO last July---you folks have a very pretty shoreline.

Looks cold, Barbara. Parks are a wonderful way to preserve the land.

What a great tranche of Toronto's park network that you have captured. I assume that the snow is not squeaking today.

I absolutely love snowy landscapes. Beautiful pictures. The colors and clarity in the waves and duck pictures along with the ice crystals is amazing!

Barbara, while I lived 23 years in TO, I don't think I have ever visited. Or perhaps old age rears its ugly head and I did - a long time ago!

How do you access it (which roads)? I plan on visiting several places before too, too long!

Those are incredible photos. Poor ducks running around on the ice barefoot ;)

Brrr...those ducks make me cold just looking at them.

What more can I say? Winter is meant to be cold, snowy; a refreshing season to savour memories of hot humid days of summer.

The link to the aerial map requires a few key strokes of typing in the park name with Toronto and there you have a perfect visual.

Everytime I walk to the post office or the grocery store I pass by a little park where all the Mallards congregate during the day for handouts, I stop by and give them the leavings of my own caged birds, who have been picky aout their feed (just like children).

Beautiful! And I love the caption about the female with cold feet!

Raph, I liked the pun myself.

The photographer had commented that while watching her, the duck had repeatedly exchanged lifting a foot out of th water. Why the bird didn't go to land or a warmer spot, I have no idea.

Willow, I loved the photos myself once I spied them.

Cute ducks. I read your comment about the duck taking it's foot out of the water. That's too funny. I bet he was trying to show the other ducks how hard-core he was. :-P

The waterfront looks so pretty in winter. I bet it is absolutely gorgeous in the summer :)

What a wonderful park and adorable ducks!

Lauren, all of the parks near Lake Ontario are lovely in the summer.

Along the shoreline from Mimico to Long Branch there were summer cottages. When walking down some of the side streets near the lake there are a few summer houses left that have not been remodeled or torn down and replaced.

Neil, welcome and yes it is very cold. I wouldn't want to be skinny-dipping out in that water. Brrr!

Mary, the wild ducks are plentiful all along the lakeshore. Once the original parents or grandparents decide not to fly south for the winter, the ducks that are hatched here remain the winters with their parents. They're protected while being in the city limits.

Here you have got some beauties indeed. A pleasure.

With those waves and that ice you wouldn't want to get too close to the edge.

In late... Barbara, very beautiful and funny (the ducks) photos, now François is not here but he would be loving this "My town Monday".

Ackworth born, welcome and thanks for stopping by.

This pier juts out into the lake and there is often no one else present. When the weather is stormy the waves lift higher and come crashing down on top of the pier.

Marie, nice you could drop by. François can browse when he returns from his vacation, the lucky duck.

What are the origins of the name CURTIS ? I've driven my work truck past there and ate lunch many times
enjoying this piece of heaven,Thank You for that !
guitmeister1@gmail.com