The Warrior Heir by Cinda Williams Chima (Book Review YA) 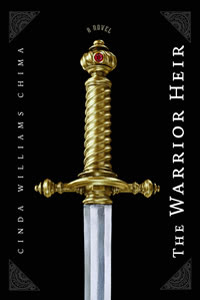 This young adult fantasy fiction is the first book in the Heir Trilogy published in 2006. The photo of the sword is what caught my eye in the beginning, soon followed by a need to purchase the book after reading the back cover introduction of a young man holding a magical sword. I was hooked; and stayed up late into the wee hours once I reached the last quarter of the book to learn how the story ended. The book is fast paced with plenty of plot twists, multiple characters with intriguing names. There were a variety of relationships within the story, complete with historical references, well described action sequences, and suspense.

In the small Ohio town of Trinity, Jackson Swift (Jack) is living the life of any 16-year old except the daily medicine he takes for heart surgery he had as an infant. The day Jack skips his medicine he loses control of his new found strength and nearly kills another player during soccer team tryouts.

Jack and his loyal friends, Will and Fitch, accompany his Aunt Linda on a road trip to locate information on their family’s genealogy and a family heirloom. The tedious fact-finding turns dangerous when the three boys discover Linda is being stalked by a man wanting to steal the heirloom. During a nighttime visit to an old cemetery, the boys are attacked after Jack discovers a medieval sword with magical powers buried by the grave of his ancestor, Susannah Downey. The boys manage to evade their attackers by seeking refuge in a church.

The truth about Jack’s heritage is slowly revealed by his Aunt Linda, an Enchanter: that he is Weirlind, belonging to an underground society of the Magical Guild of wizards, enchanters, soothsayers and sorcerers who live among us. Within the magical society sit the feuding houses of the Red Rose and the White Rose, whose power is determined by playing The Game, a magical tournament, where each house sponsors a warrior to fight to the death. The winning house rules the Weir.

With his true identity revealed, his uniqueness of being one of the last warriors has made him a target of the ruthless wizards, seeking to find a warrior to fight in the tournaments. Jack’s Aunt Linda arranges for him to begin the necessary skills training to use the powerful sword with Leander Hastings, a wizard with a mysterious past.

Interspersed with Jack’s intensive training to master the ways of the Warrior and soccer practice, he is torn between his attraction to Ellen Stephenson, a new student at Trinity High School, and Leesha Middleton, his former girlfriend who wants him back.

Jack goes to the Lake District of England via a high-stakes chase filled with treachery courtesy of Dr. Longbranch, his heart surgeon, and the Roses. There he is confronted by the greatest challenge of his life.

The story has a satisfactory ending tying up most of the loose strings, leaving a few that hint they might be answered in a later book.

this is the sort of thing I dreamed of doing when I was 16!

Gary, being in a nightmare you wish you could wake up from? Kidding. This is a nice coming of age story where Jack learns quickly amid confusion and danger of the correct paths to take.

I'm finding many of Young Adult books available are better written and entertaining stories than in the adult sections. Though for adult content, I do read adult books.

Excellent review, Barbara. I have forwarded it on two some folks who I suspect will help support the book industry after reading your review.

Wow! That sounds pretty excellent. The merging of real life and fantasy here sounds fascinating. Thanks for the review!

Chris, your friends won't be disappointed about the book. I tend to be picky about the books I read, including the ones I review.

Alyssa, the author was able to blend the fantasy aspects in nicely with the current time elements. It's a good wake-up for fantasy writers that they don't have to make up a world to put their story into. We have one right here with ready made scenery.

Too many good books to read.

this i could read, even at my advanced age :O lol

Charles, I agree, though I tend to stick to the books that relate to my own writing.

Tony, the young adults book are good reads even for us old folks. Plenty of excitement to get the tickers going.

Very good review. Maybe I should ask you for a review for me. It's funny how many adults read these books. Gee do you think we all just want to stay children. What a magical time it was!

Danielle, if you contact me via my email address in the profile I would be pleased to do a book review for you.

Adults too often forget the innocent wonder we had as children, of accepting what we see rather than trying to analyze it.