Trafalgar Castle is in Whitby, Ontario.

Trafaglar Castle was built for Nelson Gilbert Reynolds (1814-1881), Sheriff of Ontario County from 1852 to 1881. Trafalgar Castle was designed by Toronto architect, Joseph Sheard and built between 1859 and 1862. The mock-Elizabethan castle has a hidden chamber and secret tunnel. The castle cost Reynolds $70,000, an exorbitant sum at the time, and was the largest private dwelling in Canada until Casa Loma was built. The Sheriff lived in Trafalgar Castle from 1862 until 1874 when his gambling debts grew too large and he sold the building to the Methodist Church of Canada for use as a ladies college for the sum of $30,000. 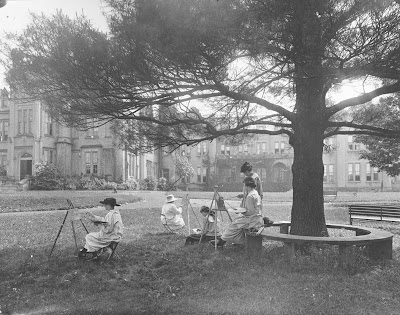 [3-North side of the original Trafalgar Castle with students standing on the lawn. The bearded man standing at far right, is probably Rev. J.J. Hare, the school's principal. May 20, 1893]

In 1979 the Ontario Ladies’ College changed its name to Trafalgar Castle School which is recognized as one of the finest private girls schools, offering “a rigorous university preparatory curriculum from Grades 6 through 12.”


Trafalgar Castle also has its own resident ghosts, as reported by students past and present, of phantom footsteps to doors that opened and closed on their own volition.

My Town Monday is the brainchild of Travis Erwin who lives in Texas. In early January he lost his home and household possessions in a fire. If you would like to donate money in support for Travis' family, go to Habitat For Travis. For the interim to see other members of the group to learn about their area of the planet go to see Chris here or Junosmom here.
Posted by Barbara Martin at 20:56

I never knew of Trafalgar Castle before. Thanks for bringing me there.

I also really liked the first image of the Kolapore Uplands piece (I do miss snow) and you brought me back to my childhood with Christian the Lion. Who didn't grow up with Born Free? Besides my wife.

I have you posted, too.

It seems that no castle can go without resident ghosts:) I love the old photos.

Chris, I had driven past the school years ago when I lived in Whitby and wondered if there was a photo somewhere, and viola!

The story of Christian the Lion makes me all warm and fuzzy inside. It was a fortunate set of events that George Adamson was available to teach Christian how to learn to become a wild lion.

David, a wee item that came up on my search for information. Though the building is old enough to have ghosts frequent it. I suspect the phantoms took their choice to stay rather than go to the light.

Lovely castle. Is it open for tours?

Its fun when personal history drives your writing (well, its also interesting when regular history drives it to). Thanks for the reply to my comment.

I am also completely with you on the George Adamson tale.

Shelley, although I do not know the full particulars of Mr. Nelson's gambling debts, I would suspect it was better to pay up rather than to have 'muscle' showing up on your doorstep or mishap done to your family.

Junosmom, it is open for weddings and tours. There is a direct link to the school in "Trafalgar Castle School" for further information and contact details.

Pretty cool but it sure does look somewhat out of place

Wonderful photos, Barbara. Do you know where the tunnel goes?

thx barbara, never knew of it before

How have I never heard of Trafalgar Castle? Thank you!

What a dramatic looking building! It would be a wonderful subject in paintings, and films too! (And a very difficult subject to draw with all the perspective on the different features - no doubt the art class pupils found that!)

Charles, today it has a full landscaped yard with many large trees in front to seclude it from view from Reynolds Street or Gilbert Street. Though on Garden Street way at the back there is a fairly clear view.

Debra, sorry, no. I have never taken the tour.

Tony, I only knew it was there after driving down Garden Street.

Barrie, there are still many places in Toronto I am unaware of and I've been here 25 years.

I'm having a hidden tunnel installed here in my own Secret Headquarters. ALso, a moat.

Hopefully, the landlord won't mind, as I rent...

Hogwarts' student would be envious of this magnificent school building!

The image of the art class under the Linden (?) trees is enchanting.

Thank you for sharing your town with us, I learn so much from your posts!

Steve, years ago I worked on a lawsuit involving tenants who had made major renovations to their apartment (including removing a wall and putting it elsewhere), and when they were ready to move out they wanted the landlord to reimbursement them their costs.

Merisi, I'll have to make arrangements to take the tour to see what's inside and whether it's similar in any way to Hogwarts.

It's so fascinating to see these old photographs and wonder about what the people in it were thinking. Interesting history.

Bindu, you're back from your far off trip.

I enjoy looking at photos of historical buildings to see the style of architecture of the times.

It must be wonderful to be a student at such a grand house! Wonderful.

Wil, I agree. The vibrations and history of the place would delight me every day.