The Eastern Wolf - Species of Concern 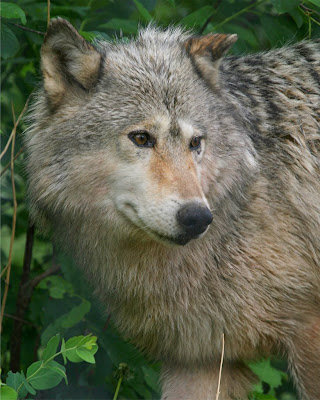 The Eastern Wolf is a subspecies of the Gray Wolf and is found mainly in Quebec and Ontario where it helps to balance the forest ecosystem. To protect the Eastern Wolf in La Mauricie National Park, Parks Canada carried out a major study on wolves and continues monitoring and public education efforts.

Under the Fish and Wildlife Conservation Act (1997), the wolf is classed as a furbearer and there is a regulated hunting season in Ontario. Wolves cannot be hunted in provincial parks and reserves that they inhabit, including Algonquin Park which is the largest protected area for the Eastern Wolf in North America.

The following video is about wolves in general, including the Gray Wolf (Timber Wolf) and the Eastern Wolf. For those readers whose computers do not read embedded commands for videos, go here.

As usual, a great post. The video had some good foorage, too.

I have seen lots of Timber Wolves in the West, but I have never seen an Eastern Wolf. Thank you for the introduction.

Thank you very much for this wonderful post, Barbara.
Wolves are marvelous creatures but have such a unfortunate destiny. Hunted almost to extinction because of cruel pleasure and foolish believes and superstitions. And they are not the only ones. All this situation reminds me of a quote from Matrix which has so much truth:

"Every mammal on this planet instinctively develops a natural equilibrium with the surrounding environment but you humans do not. You move to an area and you multiply and multiply until every natural resource is consumed and the only way you can survive is to spread to another area. There is another organism on this planet that follows the same pattern. Do you know what it is? A virus."

In Romania wolves has increase their numbers due to a series of protection laws. Unfortunately another issue comes forth, due to illegal and abusive forest cuttings their teritory is in continue decreasing. And the wolves are forced to sick food in villages, being blamed for sheep attackings. But I have to ask who is truly to blame, the wolves or the humans?

The video reminds me of my dog I had as a kid named Tooka. She was an Alaskan Malamute and she would scare the heck out of people who thought a wolf was running towards them.

I would recommend Rolf O. Peterson's book "The Wolves of Isle Royale" on that subject. He knows what he is talking about.

Such beautiful animals. I've always sort of thought of wolves as my totem. I used to have saddlebags on my motorcycle with wolves heads on them.

I love wolves. They are one of my favorite animals. We have an interesting wolf preserve here. It's small, though.

Such a grand animal! The biggest shame of our generation is how we have been driving so many species to extinction. It's alarming, and posts like yours help educate people. Great post!

Where humans come animals have to suffer. It's a great post Barbara! I have an award for you, because you deserve it! Have a great weekend.

Beautiful creatures, thanks for posting the vid, Barbara.

Chris, my experiences with Timber wolves have been up close and nearly personal. In January and February they would enter Edmonton following the hares for a slightly warmer climate from -45F outside the city. I had stopped beside a wire school fence to watch a small group of hares making their way across a school field when what I thought was a big Alaskan Malamute dog came to stand about twenty feet from me. When I looked at its eyes I knew it was no dog: yellow with intelligence. And I had already spoken to the wolf as I would to a dog. Then I said something about getting its dinner and the wolf jumped the wire fence from a standstill, landed on the otherside his attention on the hares. Then the bus came and the driver made a comment that the dog would never catch the rabbits. I wasn't making any bets.

Mihai, it is true when the environment is destroyed it reduces the numbers of its inhabitants.

One of my brothers had worked in Fort McMurray, Alberta one winter relating an incident that the elk and deer numbers had been so reduced in the area from human hunters which caused the timber wolves to come into the town. It took only a couple of instances where people had left their dogs chained outside in yards to find in the morning nothing but a collar and signs of a struggle in the snow. (Before readers become too upset about dogs being chained in yards: this was the norm forty years ago.)

David, Mals get pretty big and way back in their genetics there's likely a wolf or two.

RuneE, thanks for the book recommendation.

Charles, wolves are the embodiment of being truly wild.

Barrie, a perfect topic for MTM which I would be pleased to read about.

Bindu, I'm hoping my posts provide reminders in all parts of the world to think about their environment concerns and the impact it will have on future generations, not just humans.

Wil, humans have a long history with animals, and its time we learned to live with each other.

Bernard, you're welcome and I'm pleased to hear President Obama has put a sixty day hold on delisting the Gray Wolf from the endangered species list.

Really enjoyed this post, Barbara, and thank you so much for putting the link to You Tube, as I am one of those who cannot read the embedded films.

I love the soundtrack to the film, as well as the images - the lyrics at the end are especially meaningful.

Raph, all creatures need stick together no matter what star system we live in.

Thanks for the post, Barbara. Wolves are one of my favorite creatures and I didn't realize the distinction between the Eastern and Timber wolves. I especially enjoyed the video!

Amy, in the United States the Red Wolf has been reintroduced into North Carolina where the numbers have markedly declined. The Red Wolf's habitat has traditionally been that of the southeastern United States.

Another great post, and I enjoyed the video. I'd love to see wolves in the wild. I heard them at Yellowstone but didn't see them.

Shelley, they are very intelligent animals and not the monsters some make them out to be.