An angel is a spiritual supernatural being found in many religions. Although the nature of angels and the tasks given to them vary from tradition to tradition, in Christianity, Judaism and Islam, they often act as messengers from God. Other roles in religious traditions include acting as warrior or guard; the concept of a "guardian angel" is popular in modern Western culture. 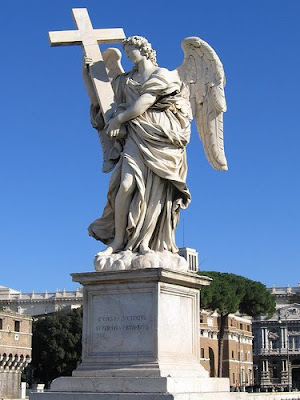 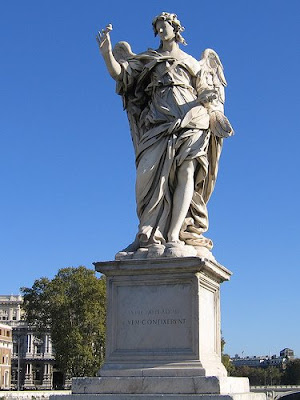 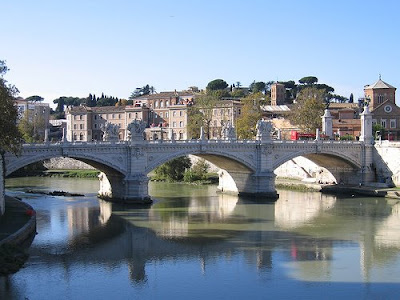 [3-Bridge near the Vatican. The first two photos are of angel statutes on this bridge.]

Angels are usually viewed as emanations of a supreme divine being, sent to do the tasks of that being. Traditions vary as to whether angels have free will or are merely extensions of the supreme being's will. While the appearance of angels also varies, many views of angels give them a human shape. 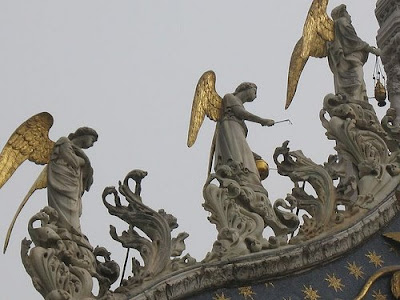 [4-On roof of the Dodges' Palace in Florence] 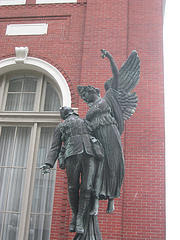 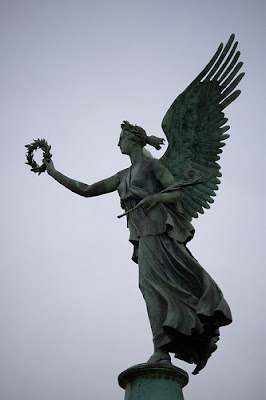 It's probably not your cup of tea, but I recently watched a couple of really good horror movies about angels called The prophecy and the prophecy 2. It's about a second war in heaven, led by Gabriel, which spills over onto the earth.

Very cool post, Barbara, I get so tired of evil always easily triumphing in fiction, with good barely able to survive. I've always been enthralled with Archangels coming down and kicking demon butt. I wrote a novel doing just that, and it was one of the most satisfying projects I ever did... ah... unsold of course. :)

Charles, actually I appreciate a good horror movie depending on its details. Recently I acquired Constantine, which had been recommended to me, and is waiting to be viewed. Thanks for telling me about those you mentioned. My budget seems to always have some money for those important things in life.

Bernard, the light has strength where you least expect it. On my bookshelves I have a few angel related items: the movie, City of Angels; a young adult dark fantasy book, Wormwood, by G.P. Taylor, where an angel coming to Earth sacrifices itself; and an excellent book, Lucifer's Crown by Lillian Stewart Carl, where good triumphs over evil. Whether it is in books, movies or life: it comes down to choice, whether you are for the light or not.

Sekhar, angels are for everyone. They have been here since the dawn of time, as humans know it.

Oh, that lovely bridge. Thanks.

I believe I have two guardian angels and they're working overtime for sure. Great photos!

Patti, I made a correction to the post to mention the location of the bridge - near the Vatican. Rome in the summer is usually very hot with very bright sunny days.

David, every person on earth has two guardian angels: one to protect you against dying before your time, and the other to help you with understanding new concepts. They will help if asked, although their answers come in mysterious ways.

For that matter, traditions vary as to whether people have free will or are merely extensions of the supreme being's will. :-)

Many of my tattoos are of angels. I'm rather fond of 'em, myself.

Steve, you may be right, because there are times when I feel like I'm going through a "Ground Hog" scenario where certain problems for me are repeated over and over.