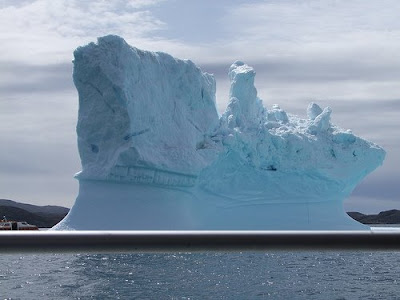 
The majority of the icebergs in the North Atlantic come from about 100 iceberg producing glaciers along the Greenland coast, while a few originate in Canada's eastern Arctic Islands.

They can be up to 20 storeys high, weigh more than 10 million tons and be more than 15,000 years old. Most appear white because the ice is full of minute air bubbles that disperse light in a similar way to water particles in a cloud, while heavily compressed ice that is bubble-free has a blue tint on sunny days because it mirrors the sky.

“Because the density of pure ice is about 920 kg/m³, and that of sea water is about 1025 kg/m³, typically only one-tenth of the volume of an iceberg is above water. The shape of the remainder under the water can be difficult to surmise from looking at what is visible above the surface. This has led to the expression "tip of the iceberg", generally applied to a problem or difficulty, meaning that the visible trouble is only a small manifestation of a larger problem. 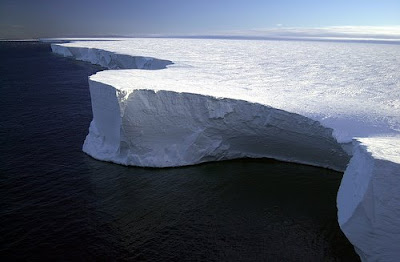 
Though usually confined by winds and currents to move close to the coast, the largest icebergs recorded are calved, or broken off from, the Ross Ice Shelf of Antarctica. Iceberg B-15, photographed by satellite in 2000, measured 295 km long and 37 km wide (183-23 mi), with a surface area of 11,000 km² (4,250 mi²). The mass was estimated around three billion tonnes.

When an iceberg melts, it makes a fizzing sound called "Bergie Seltzer." This sound is made when compressed air bubbles trapped in the iceberg pop. The bubbles come from air trapped in snow layers that later become glacial ice.” 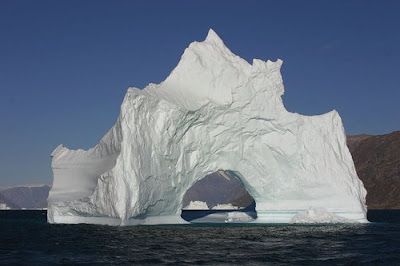 Often, in the north, polar bears are associated with icebergs. 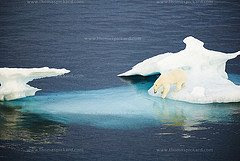 [4- near Greenland, look close for the bear]

“The polar bear (Ursus maritimus) is a bear native to the Arctic Ocean and its surrounding seas. The world's largest predator found on land, an adult male weighs around 400–680 kg (880–1,500 lb), while an adult female is about half that size. Although it is closely related to the brown bear, it has evolved to occupy a narrow ecological niche, with many body characteristics adapted for cold temperatures, for moving across snow, ice, and open water, and for hunting the seals which make up most of its diet. As it can hunt consistently only from sea ice, the polar bear spends much of the year on the frozen sea, although most polar bears are born on land. They usually have two cubs.

The polar bear is classified as a vulnerable species. Of the 19 recognized polar bear subpopulations, 5 are declining, 5 are stable, 2 are increasing, and 7 have insufficient data. For decades, unrestricted hunting raised international concern for the future of the species; populations have rebounded after controls and quotas began to take effect. For thousands of years, the polar bear has been a key figure in the material, spiritual, and cultural life of Arctic indigenous peoples, and the hunting of polar bears remains important in their cultures.

The IUCN now lists global warming as the most significant threat to the polar bear, primarily because the melting of its sea ice habitat reduces its ability to find sufficient food. Sea ice melting will also cause changes in their mating, and traveling patterns. The IUCN states, "If climatic trends continue polar bears may become extirpated from most of their range within 100 years." On May 14, 2008, the United States Department of the Interior listed the polar bear as a threatened species under the Endangered Species Act.” 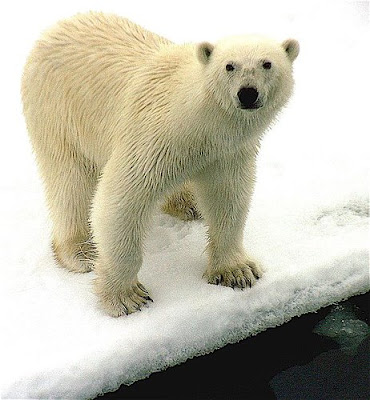 [5- notice the spread of flat paws over the ice, and I could not help but think "My, Grandma, what great big feet you have."]

It has been noticed, in northern Canada along the arctic shorelines, that a number of polar bear corpses have been seen floating in the water and the cause due to drowning.

Charles, the polar ice cap is melting and by next year ships will be able to sail the Northwest passage as the ice will be sufficiently melted. Polar bears use the polar ice as their habitat and of those that remain will become land animals, perhaps evolving once again.

I could look at those pics all day long. Amazing.

That is scary and informing all at the same time. I'm so sad for the polar bears and I wish there was a way to reverse time's effects but I can't think of one right now.

Travis, it is interesting to see the different shapes and sizes of icebergs as they float in the North Atlantic. In 2007 there were a record number of them.

preTzel, all things adapt to changing conditions in time. If all the manufacturers shut down it might help the warming trend, but then your standard of living would fall along with the health care we have grown accustomed to.

And still the States won't get behind the Kyoto Protocols, or even... aw, I'm just not going to get into it. It's time I biked to work anyway!

Simply an amazing posting, Barbara. It begins with majesty, continues with instruction, then moves to the polar bear tragedy. Reading this was like listening to emotionally impactive music.

Tony, my apologies for using the wrong name. (This was because I'm waiting for the next Rick to get back to me about ghosts).

Dear Barbara,
thank you for showing your bautiful country to me!
Please come to my blog, I have an award waiting for you!
Have a nice Sunday!

I believe Arctic ice conditions and extent vary widely from millennia to millennia, as well as month to month. This is not the first time ice has increased substantially as in July of this year, and retreated as in the months following. It is only mankind’s hubris at any one moment in history to consider itself both cause and effect of everything on earth. The number of polar bears in Canada’s eastern Arctic has increased from 850 in the mid-1980’s to 2,100, an actual 150% gain. The seal population polar bears cull on a regular basis is not happy at all over this change. They hate being polar bear happy meals. :) Beautiful pictures, Barbra.

Maria, thank you. Your own site of beautiful views of Vienna, in town and out, including your videos of your dog, Dora, munching on blueberries are a nice visit away.

Bernard, I would prefer the numbers to be around 10,000: not 2,100. In photo hunting I came across one where a polar bear had managed to get a young Beluga whale up onto the iceberg. Also, they like to eat fish.

THANK YOU very much for these wonderful photos and text so interesting.
I hate co2 emissions that destroy the glaciers and I cry polar bears disappearing.
The icebreg looks like a boat.
See you soon.
François.