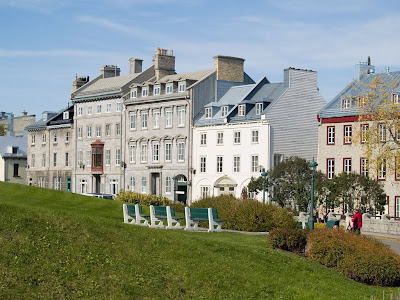 These benches are located at the edge of the National Historic Site of the Plains of Abraham at the Upper Old City of Quebec City, PQ.

The plains are named after Abraham Martin, known as "the Scot," (1589-1664), a fisherman and river pilot, who brought his animals to graze there as he owned land near the area of the current park.

More than half of the buildings in Old Quebec (including the ones in the photo) date back to pre-1850, and are in one of the 11 architectural styles.

RuneE of Visual Norway originated Bench of the Week as an informal meme. Please visit his site for his spectacular photos of his bench location today.

Other participants this week are:
Phoenix C of Sylvan Muse
Gerald England of Ackworth Born, Gone West
Malyss has a lovely bench.
David Crammer of Education of a Pulp Writer has a seaside bench.
Steve Gallow has joined this week with a bench at Long Lake.

Neat historical benches! I wish I could see a close up also. I enlarged the photo but it jsut seemed like they are benches for one.

Green and white - an nice combination. The design was new to me, but all the better for that.

I liked the area around the benches. It had a European touch that I enjoyed seeing.

Interesting to see the site. Thanks.

These benches look like they'll have a great view of those interesting old buildings, Barbara.

These benches are great, Barbara, you can sit on them and pretend to be fine lady from an earlier era. Or you can just enjoy the architecture! But I would need sun block.

I like this little rank of three benches! They are in a pretty place,perfect to observe the interesting architecture on the other side of the street. I'd like to sit there for a while..

PERBS, if you enlarge the photo, in the right there are two people from which you can determine how many people can sit upon each bench: 4, maybe 5 to be cozy.

RuneE, in and around Quebec City there are historic buildings that date batk to the 1600s.

Phoenix, I suspect that after tramping all over the Historic Site and the Quebec Citadel one would want to just sit awhile to reflect.

Teresa, during the several visits to Quebec City that I 've done the architecture always draws me. Perhaps I lived here in a past life.

Malyss, an artist would find it a perfect place to sketch.

What style those buildings have. Really something.

I'd happily sit on one of those benches and admire the architecture.

A lovely configuration.
The Plains of Abraham? Sounds like that should be here in Israel. :)

As you sit staring ahead from these benches, a traveller would realize that memories and dreams were being made.Beautiful buildings.

Steve, I have linked in your post, and welcome.

Rob, the architecture in Old Quebec has quite the variation to it, and I have linked in a website that provides a thorough explanation.

Dina, they were named after a Scottish man who would take his cattle from a nearby farm to graze. The name stuck thereafter. A future post will cover the major battle there between the British and the French, where the former won.

Pam, that particular area of Quebec is full of history dating back to 1603 when Samuel de Champlain arrived. There is one church still standing from 1647.