Today's portion of the Skyline Trail in Jasper National Park, Alberta is from the
Snow Bowl campground to the Curator campground, a distance of is 7.8km with a loss of elevation of 100m. 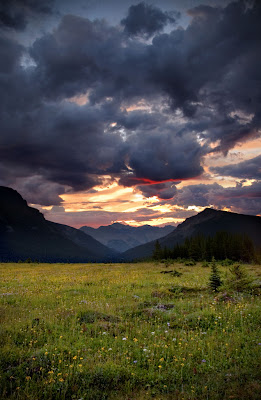 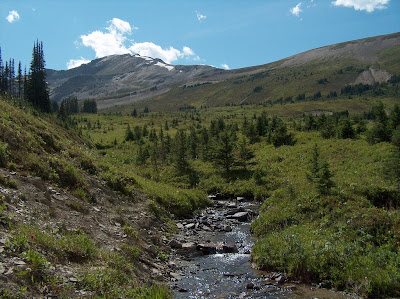 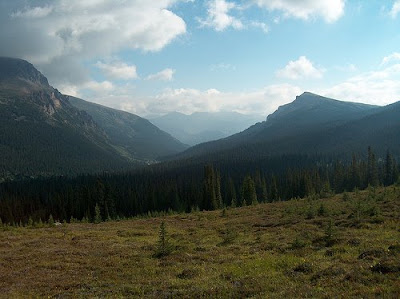 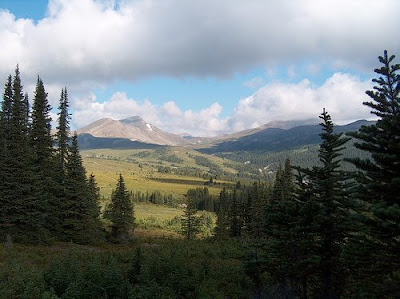 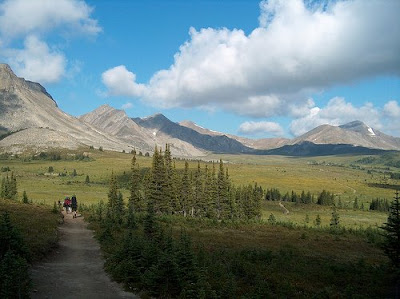 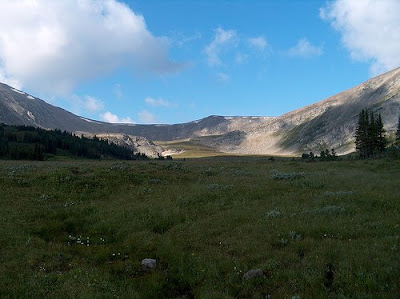 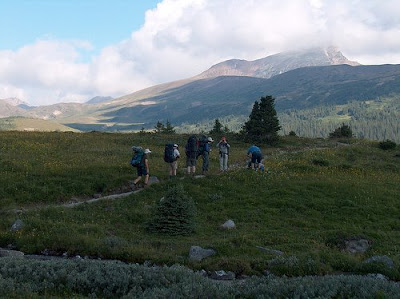 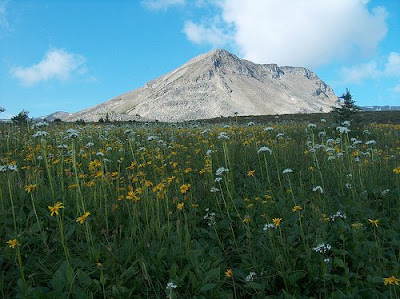 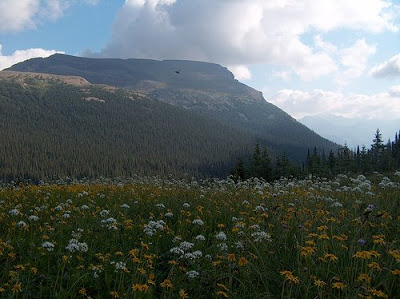 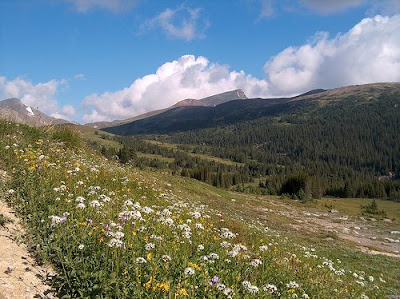 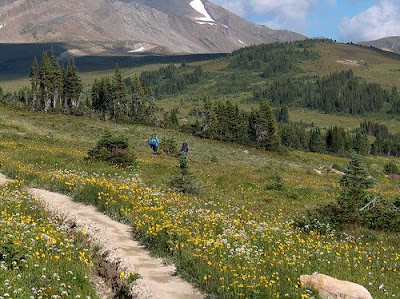 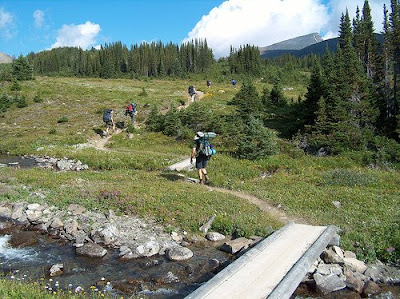 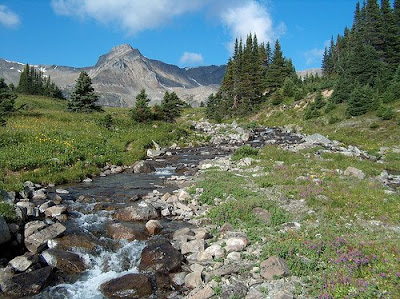 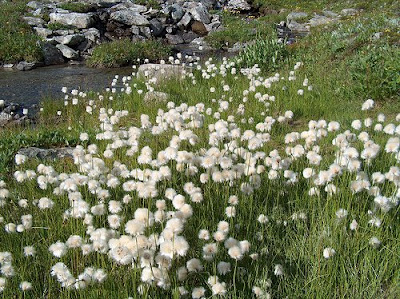 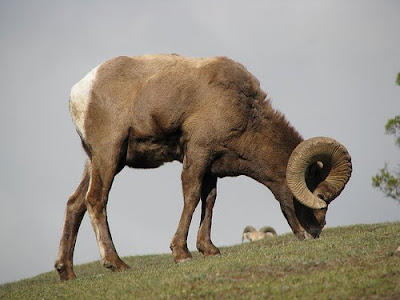 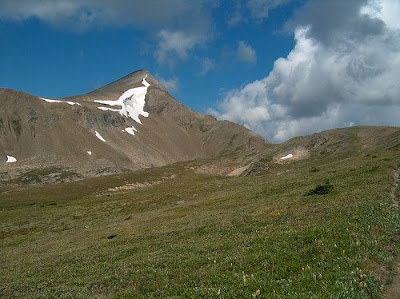 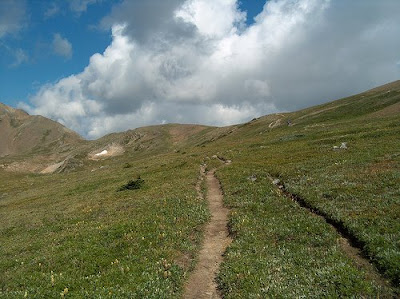 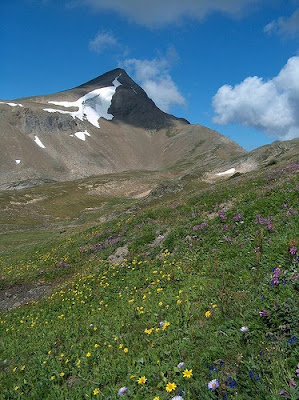 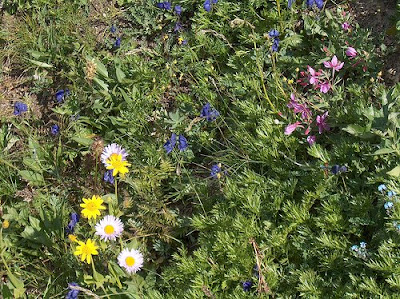 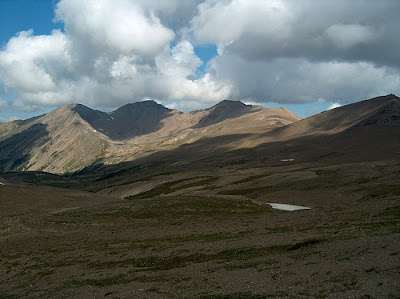 [65-Alpine environment between Big Shovel Pass and The Notch] 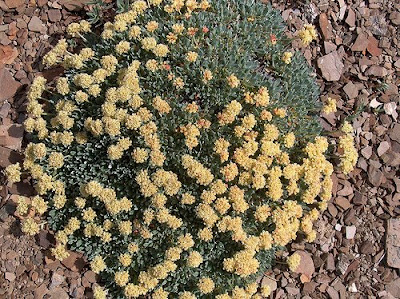 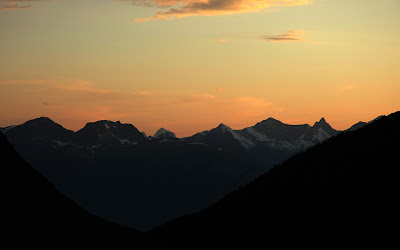 [67-Sunset over Trident Range near Curator campgroun - click to enlarge]

The Curator campground is one km south of the trail and below treeline with a nice buffer of trees around it.

The campgrounds are basic ‘backcountry campgrounds’ with a small patch of uneven ground, small common area with two picnic tables, a food suspension cable and an open pit toilet. The use of gas stoves is mandatory as campfires are not permitted.

Wow. Those are breathtaking. I bet it's even cooler in person.

I particularly love the first photo - that looming sky and the glowing foreground colours ...

A food suspension cable? For giraffes?

What an extraordinarily beautiful place. A wonderful way to start my day.
Thanks you, Barbara.

The flowers are incredible. Talk about spring!

oh goodness, maybe the prettiest place you have taken us to yet

You have got some impressive photos her - especially that mountain sheep. I have respect for those horns.

Wow! Gorgeous. Makes me long for a summer trip to the Sierras so my family and I can go hiking. :)

What a beautiful sunrise! Again such a wonderful tour!
Have a nice weekend!

That's some seriously beautiful country you folks got there...

The Sunrise near Snow Bowl campground almost looks like a painting. A postcard shot for sure.

Clair, any mountain air is exhilarating!

Raph, a food suspension cable is to keep your food away from bears. One of the major rules of hiking or camping is to NEVER keep food in your tent; otherwise you would be inviting them in for a visit and/or a mauling.

Debra, some of the landscape is bare minimum with respect to plants, often only lichen grows. This area is known for the roaming herds of caribou. Sometimes the trail is closed in May and June to allow the caribou to calve their young away from prying human eyes.

Charles, those wildflowers often do not appear until July.

Gary, there are other areas I am more partial to, but I agree with you that this is a pretty place.

L.A., the outdoors is a place to be discovered.

RuneE, those horns are resilient when the season for rut arrives in the fall and the rams are butting heads together. Impressive sounds!

Michele, that is part of the reason I post these hikes: to get readers out there exploring their area on walks, long or short. There is so much to experience for everyone.

The first photo is beautiful, almost like a painting. Ver nice photos, Barbara, thank you :)

As always, a spectacular tour.

Hagelrat, alpine beauty at its best.

Steve, there are thousands of square miles of that gorgeous country.

David, to me it looked as if it had recently rained and the clouds were breaking up as dawn arrived.

Mihai, it seems to be a favourite of most of the visitors.

photo 1 - literally took my breath away
photo 2 - I was wishing I was there
by photo 4 - I almost felt as though I was there
photo 60 - I thought I really was there!

Don't forget, Barbara, you promised to review Cut Short. I've passed your request for a review copy on to the PR guru at No Exit. In the meantime, it's available to preorder on amazon.ca... Tell all your friends! The character in photo 60 looks as though he'd enjoy it (... munch munch...very tasty)

As usual, I love these hikes with you. :)

Being not much of a city type, these scenes strike my fancy.

Barbara,
I love the photos. I love the cloud formation in the 1st picture. All of the pictures are beathtaking, I wish I lived closer so it wouldn't take that long to get there to enjoy the views myself. I love being outside and taking hikes. I moved a year ago and miss my hiking buddy. I have to find a new hiking buddy, since my husband isn't into hiking.

Francois, I'm pleased to hear you liked the virtual hike.

Leigh, I have left a spot open for when your book is ready.

J.L., I feel the same way about Toronto.

Becky, you live in a state that has many trails to explore.