My Town Monday - The Kissing Bridge 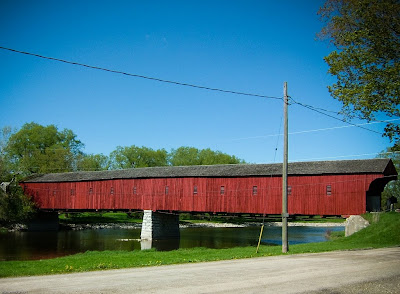 
One of the local attractions close to St. Jacobs is the "Kissing Bridge" in West Montrose that was built in 1881 by John and Benjamin Bear and is the last remaining covered bridge in Ontario. Originally constructed out of wood, repairs to the bridge have been made with a combination of steel, wood concrete, asphalt and stone to replace the abutments, piers and deck. By designing a bridge with a cover it was found to last 70 or 80 years longer than a regular bridge of 10 to 15 years.

“John Bear wrote the specifications in longhand to accompany his drawings. The bridge was to be 198 feet long, 20 feet wide and 13 feet from the low water mark to the top of the corbel. Hardwood was used throughout the structure, but pine was reserved for the rafters. The original timbers were very large, measuring 50 feet long and 9 to 18 inches thick.

“When the bridge was built it measured approximately 208 feet long, 17 feet wide and 13 feet high. Originally, the substructure (pier and abutements) was made of cedar cribs filled with loose stone. The oak planks for the floor were joined with 7 inch wrought iron spikes.”*

In 1904 the bridge was closed for the first time to have the original oak floor planked on top. The wooden trusses were replaced in 1933. Further repairs were made between 1955 and 1996 while maintaining the original appearance.

The covered bridge was recognized as a historic site by the Ontario Heritage Foundation in 1960.

The specifications for this bridge are available at the Kitchener Public Library’s Grace Schmidt Room and the Elmira Municipal Archives.

The name “Kissing Bridge” comes from the traditional cost of the toll as it is being secluded and against the law to travel faster than a walk. Local girls learned to be wary when the horse stopped of its own accord without any signal from the driver. 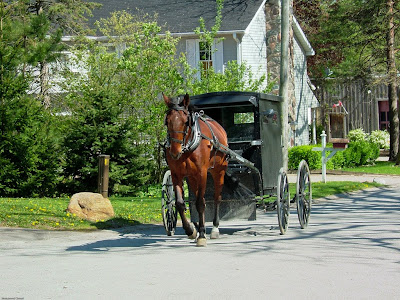 St. Jacobs is home to a small population of Mennonites. The rural areas around St. Jacobs are populated with many Old Order Mennonite farmers who retain the religion, customs and lifestyle of their 19th century forefathers. They are separate from the other Mennonite orders in Canada.

Travis Erwin from Amarillo, Texas is the founder of My Town Monday. For other locations to visit please go to Travis' site here.
Posted by Barbara Martin at 22:09

Is the bridge still open to traffic?
I love covered bridges. Ohio is home to quite a few. The one in Peninsula is no longer open to traffic. In the summer and fall dances are held there.

new brunswick used to be the covered bridge capital of canada :)

We don't have enough water to have many bridges in my area and certainly none as cool as that one.

It's a lovely looking structure - that bridge should be preserved forever

Debra, yes, the bridge is still open to traffic. The Mennonites use it daily.

Tony, it still is, having the longest covered bridge in the world!

Travis, covered bridges are a boon for horse drawn vehicles as horses will go readily into a covered bridge. On other types of bridges where they can see over the sides down to the water, they tend to baulk and refuse to go over.

Gary, with the repairs that have been done in the last twenty years have been hidden behind wooden covers. It has been reinforced with concrete and steel.

That's definitely something really cool that California lacks: covered bridges. I have such a great time checking them out when I visit the New England area. The "Kissing Bridge" is certainly lovely and seems to be in fantastic shape!

Also, just from reading your comment above, I hadn't realized that about horses and covered bridges (although it makes complete sense to me now).

Michele, covered bridges have always held sway over me. Now you have a quirky thing about horses for a story.

That bridge is wonderful. I always wondered how it is to cross such a bridge. In Romania we don't have this type of bridge, they are all opened.

Mihai, it's like going through a tunnel where the flooring creaks a bit.

last i heard, barbara, it was deteriorating, with no plans to save it... due to expense and lack of craftsmen :(

As always, a great virtual tour.