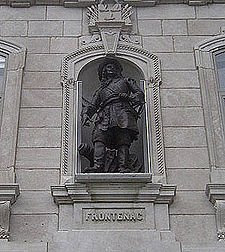 Frontenac was a man of noble birth, his father and uncle had been playmates of the young Dauphin, later Louis XIII. He entered the army at an early age. In 1635 he served under the prince of Orange of Holland, and in 1643 he was promoted to the rank of colonel in the regiment in Normandy. This was followed three years later of obtaining distinguished honours by being made a marshal de camp. At the Peace of Westphalia in 1648, Frontenac returned to Paris and married, without the consent of her parents, Anne de la Grange-Trianon, a girl of great beauty, who later became the friend and confidante of Madame de Montpensier. 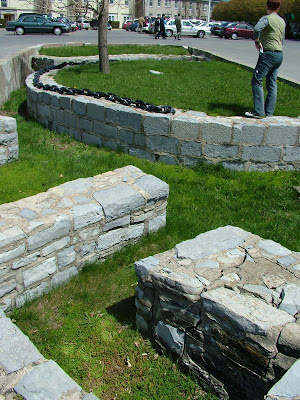 
During Frontenac’s first term as Governor General of New France, he had supported the expansion of the fur trade, and established Fort Frontenac (now Kingston, Ontario). However, “he had been recalled to France in 1682, after ten years of service, chiefly on account of his arbitrary temper. He had quarreled with the Bishop. He had bullied the Intendant until at one time that harried official had barricaded his house and armed his servants.

“He had told the Jesuit missionaries that they thought more of selling beaver-skins than of saving souls. He had insulted those about him, sulked, threatened, foamed at the mouth in rage, revealed a childish vanity in regard to his dignity...”* 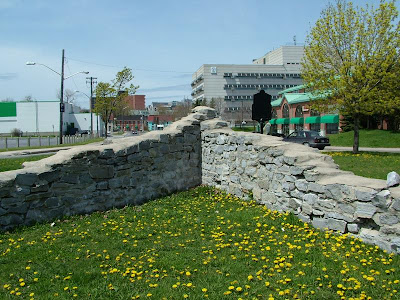 To the Europeans who had come to the New World, the wilderness was occupied by savage tribes. The natives had been clever enough to pit the English against the French. Until their arrival, the natives’ sharpest tool had been made of chipped obsidian or hammered copper. Their weapons had been the stone hatchet, axe or bow and arrow. When steel and gunpowder reached them, the natives craved the supplies from Europe and their trade became a necessity.

The Iroquois held the lands bordering Lake Ontario, and from the time of Champlain, there had been trouble between the French and the Iroquois. The French had tried to make friends, sent missionaries, most who met with massacre and torture. With the Iroquois being hostile it was difficult for the French to travel inland on the waters of Lake Ontario.

In 1689, Frontenac was again sent to New France for his second term of office where he was to confront the Iroquois. He learned the Iroquois had real grievances against France. Frontenac’s predecessor, Denonville, had met their treachery by treachery of his own. “Louis XIV had found that these lusty savages made excellent galley slaves and had ordered Denonville to secure a supply in Canada. In consequence the Frenchman seized even friendly Iroquois and sent them over seas to France. The savages in retaliation exacted a fearful vengeance in the butchery of French colonists. The bloodiest story in the annals of Canada is the massacre at Lachine, a village a few miles above Montreal. On the night of August 4, 1689, fourteen hundred Iroquois burst in on the village and a wild orgy of massacre followed. All Canada was in a panic.

“La Potherie, a cultivated Frenchman in Canada during Frontenac's regime, describes an amazing scene at Montreal, which seems to show that, whether Frontenac recognized the title or not, he had qualities which made him the real brother of the savages. In 1690 Huron and other Indian allies of the French had come from the far interior to trade and also to consider the eternal question of checking the Iroquois. At the council, which began with grave decorum, a Huron orator begged the French to make no terms with the Iroquois. Frontenac answered in the high tone which he could so well assume. He would fight them until they should humbly crave peace; he would make with them no treaty except in concert with his Indian allies, whom he would never fail in fatherly care. To impress the council by the reality of his oneness with the Indians, Frontenac now seized a tomahawk and brandished it in the air shouting at the same time the Indian war-song. The whole assembly, French and Indians, joined in a wild orgy of war passion, and the old man of seventy, fresh from the court of Louis XIV, led in the war-dance, yelled with the Indians their savage war-whoops, danced round the circle of the council, and showed himself in spirit a brother of the wildest of them. This was good diplomacy. The savages swore to make war to the end under his lead.”**

Wow,Barbara, never a dull moment in Frontenac's life! Very much his own man, not even caring about getting off on the right foot with the in-laws, let alone anyone else! The wifely enquiry of "how was your day?" would never be met with "just another quiet day at the office". More like "well I seized the tomahawk, shouting at the same time..led in the wardance in front of that damned assembly".Makes for fascinating history, but the guy sounds a bit manic to me.How would an old guy like that manage in a nursing home these days - sedated I guess.Like I said... Wow.

I would have loved to see that war-dance! :-)

'He had told the Jesuit missionaries that they thought more of selling beaver-skins than of saving souls.'

Pam, I considered that Frontenac had been sent to New France due to his irascible behaviour.

So many great stories from that time.

Amazing story, Barbara. I would have loved to have seen that war dance. It's interesting to learn these juicy little historical nuggets. Thanks for digging them up!

Teresa, the older historical books often have 'nuggets' that are not often quoted.

He had trouble with Iroquois because he made friends with their enemies. And the English got to the Iriquois first.

Of course that's generally how Europeans were able succeed in conquering even in places where they were badly outnumbered by the natives...by using the natives against one another.

J.L., to think the aboriginal feuds carry on even today, though in a more restrained manner.