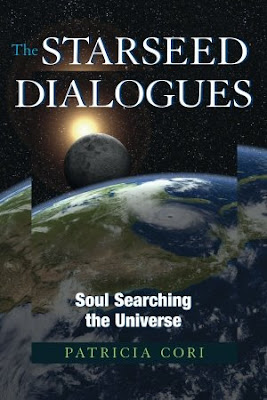 The Starseed Dialogues contain detailed answers to questions Patricia Cori has received from readers of the Sirian Revelations trilogy, her original collection of channeled teachings from the Speakers of the Sirian High Council. Patricia Cori is among many who believe that life on Earth will radically change after 2012. This book answers many questions about the connections among seemingly disparate subjects: our shift in consciousness and the current Earth Changes in the form of global warming and catastrophic earthquakes; the mysterious inner world of Agharta; and the significance of visiting sacred sites, such as the Great Pyramid, to receive celestial messages. As always, the Speakers’ message rings clear: Release your fear of what lies ahead, for we are about to experience a glorious transformation of consciousness. What await us is a brilliant new age of truth, light, and beauty.

Although I have an avid interest in the universe and soul related topics, I am wary of any assertion made by channelers’ connections with spiritual beings or entities. This particular book is interesting providing the reader stays grounded by sensible thought. Every person who questions the world about them should not disregard anything that seems peculiar or far fetched. There was a time when the world was considered flat and any ships sailing into uncharted seas would fall off the edge. This has been found incorrect. Early scientists who reported their discoveries that the Earth revolved around the Sun were discredited and put to death if they persisted with informing others of their findings.

The concepts will be a tough sell on many people, especially those who have not read books on Atlantis, channeling, and the ability of the soul to ascend or connect with the Divine Oneness (God). There are also discussions on the evolution of our DNA from a double to a triple helix, the interstellar and multidimensional relationship between our solar system and others; and the conspiracy that dark forces of an alien race are within the governments to keep the people ignorant. For those who have an open mind to consider the possibilities presented will find concepts, like the evolution of DNA, interesting. I certainly did.

2012 marks the end of an era and the beginning of a new one according to the Mayans. It also roughly coincides with the astrological transition to the Age of Aquarius from the Age of Pisces. There will be a very rare galactic alignment of the Sun and Earth in the Milky Way (Photon Belt). The transition is about the raising of our vibrations (the ascension of humans from the 3rd dimension to the 4th dimension). The Earth has been moving over a period of years into an area of very high vibrational energy that is thought to raise the vibrations of the Earth and all its life-forms to enable it to make the transition to a higher dimension. Part of this transition entails the evolving of the DNA codes in humans to be transformed in a quantum leap into connection with the Divine Oneness. This transition is also called the Great Shift that occurs every 26,000 years which is recognized in the Mayan calendar and the Hindu Vedic tradition. The earth changes that have been ongoing are part of the transition to the new world era.

According to other books I have read, including The Starseed Dialogues, there are beings from other planets and star systems such as the Pleiadians and Sirians under the direction of the Galactic Federation who are assisting with Earth’s and mankind’s transition through the shift.

The message from Patricia Cori is this is the wake-up call to humanity to live richer lives in order to look forward to the coming changes – that the mother earth is birthing a new world. It is an evoluntionary leap for mankind to enable them to mutate their consciousness. Time is no longer linear, but in the ‘now moment’, similar to the term related in Eckhart Tolle’s best selling book, A New Earth. Fear and indecisiveness halts a person’s progress and to combat this, there is always the freedom to choose which path to take, combined with love and fortitude.

As incarnated souls we chose to be here to experience this awakening. It is important to be at peace with yourself, your neighbours and the planet before the journey begins. Patricia Cori feels that every individual’s experience of growth and enlightenment ought to be shared with others. Most important of all, it is necessary for each of us to think independently.


Patricia Cori has dedicated her life to the study of mysticism and philosophy, ancient civilizations, shamanism, metaphysical healing, and extraterrestrial life. In 1995, she founded the Light-Works Association, a nonprofit healing center and New Age Library. The author of The Cosmos of Soul, Atlantis Rising, and many other books, she lives in Rome, Italy. She is the host of Web radio talk show www.bbsradio.com -– a program dedicated to exploring the merging of science and spirit.

This sounds very interesting, Barbara. It must have been both fascinating and difficult to distill into a review - I am in awe!

I agree with what you suggest about reading with an open mind and sensibly.

Yes, I'd think sensible thought would be quite important!

Raph, this is what comes of publishers telling me they like my thoughtful reviews.

It would be foolish of humans to think that we and the creatures that inhabit Earth to be the only living entities in all the solar systems around us. I'm certain at sometime in the future the extra-terrestrials will make themselves known to us openly without vanishing as they tend to do in UFO and flying saucer sightings. It is mentioned in "The Starseed Dialogues" the aliens are not allowed to interfere with humans due to a universe law. That in itself is interesting, which makes me consider that the sightings made in the past were accidents, in that the aliens were sneaking around Earth collecting their information. Or, if we can now see the alien ships more clearly and in more reported sightings from 'professionals' i.e. air force pilots, policemen, then perhaps there is a greater consciousness level within humans.

Charles, you might find this material beneficial for one of your future books.

Happy Easter to you and your dear ones Barbara.

Barbara: A masteful review of a very interesting phenomena in publishing and today's culture.
Thank you & Aloha

As always, a very thorough review, Barbara. The heightened consciousness theme has never been my cup of tea, but your review certainly made it enticing.

It's not my type of book but I certainly enjoyed your in-depth review.

When I was in Belize two years ago, most Mayans were certain we would live to see 2013.

Cloudia, it is important when reading on this phenomena to discern what you require.

Bernard, the heightened consciousness is something everyone will be aware of when their time comes. It is knowing things immediately without having documented proof before you.

David, there is no end of the world as some think. There are earth changes to take place in areas not accustomed to them, i.e., flooding of the shorelines around the world with the polar iceshelves melting, earthquakes in North America on the eastern seaboard, the St. Lawrence River, and other places. The Earth has always had some form of change over the ages and mankind has prevailed.

The Starseed Dialogues sounds fascinating. I've seen some of the alarmist documentaries on the History Channel about 2012, but I really don't believe the world will end in a few years. Thanks for the in-depth review.

Good post Barbara! "the aliens are not allowed to interfere with humans due to a universe law." I wish humans had had this law, when they set out to discover the world. The first the discoverers or explorers did, when they arrived in unknown countries, was occupy them and claim them for their king or other rulers.After this the original habitants were forced to give up their culture and adapt that of the intruders.

goes on my list to buy this year, but not from amazon, i've suspended orders pending their reversal of a stupid policy on gay/lesbian material