Today’s post is a combination of two posts: one for My Town Monday and the other for
Wild West Monday put on by The Tainted Archive.

John Ware (c. 1845 to 12 September 1905), arrived in southern Alberta, Canada in 1882, bringing the first 3,000-head of cattle for the North West Cattle Company from Idaho. Born into slavery on a cotton plantation near Georgetown, South Carolina, the second youngest of 11 children, and when he gained his freedom after the American Civil War he left for Texas. There he became a cowboy and learned the skills of a rancher. Due to his large stature (over 6 feet and 230 lbs.) and dedication to hard work he was able to work his way up to Canada driving cattle. 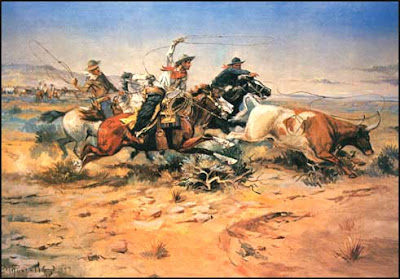 Driving cattle is extremely difficult with harsh working conditions and no assistance is available if a cowboy becomes injured or disabled. Cowboys were responsible for the well-being the cattle during the times they were moved from ranch to ranch or to pastureland. They were expected to protect the cattle from poachers, wild animals and keep them from wandering away. To keep cattle moving in the correct direction, it was important that the lead cattle lead in that direction. If the lead cattle did not turn, a tactic was to fire a shot in front to make them turn; and if that didn’t work, then the cowboy had to ride his horse in front of the cattle and force them to turn. A very dangerous and life threatening act if they refused to move. 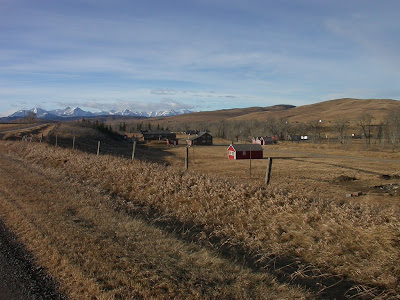 After his arrival in Calgary, Ware continued to work for the North West Cattle Company which had formed the Bar-U Ranch near Longview, Alberta south-west of Calgary. As a ranch hand he was paid a daily rate with room and board included. Riders were allowed to sleep in bunks above the warm kitchen.

In 1884 he went to work at the Quorn Ranch on the Sheep River, owned by members of the Quorn Hunt Club in Leicestershire, England, with a cattle herd and imported Irish hunters from Ireland. Ware’s position in charge of the horse herd manifested his stature in the ranching community. In late May 1885, Ware, as representative of the Quorn, accompanied a hundred riders, five hundred horses and fifteen chuck-wagons from Fort Macleod on one of the last big spring round-ups to comb the entire foothills country from the Montana boundary north to Calgary. The Macleod Gazette observed: “John is not only one of the best natured and most obliging fellows in the country, but he is one of the shrewdest cow men, and the man is considered pretty lucky who has him to look after his interest. The horse is not running on the prairie which John cannot ride.” (2 March 1892. Macleod Gazette (Fort Macleod, [Alta])

Another incident on the 1885 round-up found Edward J. F. Hills, an English gentleman and novice cowboy, who was taken under the wing by John Ware. Hills wrote letters home of Ware’s reputation as “the best rough-rider in the North-West,” and of Ware’s personal kindness in helping him master range-land skills.

By 1890 Ware had his own spread on the Red Deer River, known as the “Four Nines” with his own registered cattle brand as he had taken some of his wages in cattle. 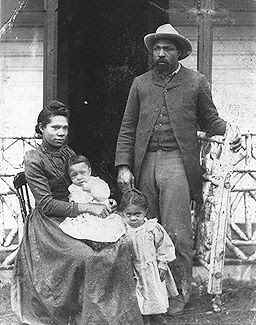 [3-John Ware and Family in Alberta] Ware had almost given up on finding a wife in Alberta, as there were few black people in the area, and when he heard the Lewis family had moved in with a daughter of marriageable age he borrowed a wagon to visit the new arrivals. Once there he took the family for a ride in the country, but unfortunately a storm blew up and the team was struck by lightning. No one in the wagon had been injured, but the team of horses were dead. It is reputed that Ware simply shook his head and said, “Now I’m going to have to break in a new team” and proceeded to drag the wagon back to Lewis farm by himself.*

He married the Toronto-born Mildred Lewis March 2, 1892. By 1900 they had five children, two daughters and three sons. In 1902 his first home on the Sheep River near Millarville was destroyed by the spring flood, then rebuilt on higher ground. Soon the arrival of more settlers signaled the end of the open range, and John Ware moved his family and 300-head of cattle 90 miles east of their old home to a location near Brooks. This location was near the banks of the Red Deer River and a stream now known as Ware Creek (located west of Dinosaur Provincial Park where the original Ware cabin has been preserved).

They prospered, their cattle herd growing to 1,000 head, with Mildred doing the bookkeeping for the ranch and teaching her children to read and write. Ware popularized steer wrestling which would later become a highlight of the Calgary stampede.

Mildred died of pneumonia and typhoid in the spring of 1905 and a grieving John sent his children to stay with Mildred's parents in Blairmore. On September 11th, Ware was killed when his horse tripped in a badger hole and fell on him. His funeral held September 14, 1905 at the Calgary Baptist Church was the largest Calgary had ever seen. People from all over Alberta and British nobility came out to bid farewell to Alberta’s legendary black cowboy.

“In an era where roughness, dishonesty, bullying, and lawlessness seemed normal, Mr. Ware showed honesty, skill, hard work, and decency. He was known as, ‘a man of unquestioned honesty and agreeable nature...[who] boasted the rare distinction of never having been thrown from a horse. At rough-riding and roping he was an expert’” (Turner, 1950, pg. 461)*

Ware’s regional folk hero status centres on his remarkable horsemanship, strength, good-natured humour and general kindness, his loyalty to friends and neighbours, and his willingness to take novice cowhands under his guidance. Ware was a man of action and few words: an attribute shared by the heroes of the cowboys of the frontier.

John and Mildred Ware’s children had no descendants. Their last surviving daughter, Nettie, obtained an honourary doctorate from the University of Alberta in 1982 for her work on the pioneer history of the province. Nettie died on her ninety-sixth birthday in March 1989.

Travis Erwin from Amarillo, Texas is the founder of My Town Monday. For other locations to visit please go to Travis' site here.

Ware seems like quit a man. I think in many ways the west judged men by their character and work ethic more than skin color. Though I realize that judgment came with limitations. It's always great to hear of those who overcame those limitations.

What a great story Barbara! This is an interesting piece of history. Thanks for writing about it!

Gary, the western history of Canada and the United States should be remembered as developing these two countries.

Travis, perseverance is the necessary element to succeed. John Ware proved that.

Interesting post Barbara. The Bar U is still there and running strong.

Such a hard life it was back then. I enjoyed the history, B :)

A fascinating post about a worthy man. I went to the Calgary Stampede once and it was a blast, but those chuck wagon races are scary. Like NASCAR but with horses and wagons.

This is really interesting, Barbara. I liked his reputation for honesty and the fact that he was never thrown by a bronco. He must have been quite a cowboy!!!

Reb, personally, I'm pleased ParksCanada has control over the 367 acres remaining of the Bar-U Ranch now that it is a historical site.

L.A., Edward Hills, being an English gentleman (as mentioned in the post), was able to withstand the hard work. He had met other gentlemen who returned to England unable to bear the demands of it. Hills own account of his travels in western Canada was documented, and I will be posting this later.

John Ware acquired most of his ranch experience in Texas working on large cattle ranches, one which ran 15,000-head of cattle and 5,000-head of horses. Cowboys had to be tough and hardy to survive.

Linda, I stopped going to the Alberta provincial stampedes when every chuck wagon race I watched in two years had a horse put down because of a broken leg. It was awful to watch a horse struggle to bravely stand on three legs, knowing in minutes the vet would put it down. The severity of injuries went up when the drivers began using Thoroughbred horses off the track to get the speed up. When they used regular draught or draught-crossed horses there were hardly any accidents.

Teresa, John Ware earned his reputation and then some. I think it would be fitting if Hollywood made a tribute movie about him.

What an amazing man!

I love the story where instead of despairing when the horses were struck by lightning, he dragged the wagon back home himself!

Wish I could have met him.

I'm a day late with reading MTM posts. What an interesting and courageous man was Ware. A real pioneer.

Raph, there are a few other interesting stories about John Ware which I will be posting later. His work at the Quorn Ranch had far reaching effects.

Debra, he did what needed doing.

Tough, gritty pioneers like Ware who garnered the respect of everyone they met seem to get short shrift in the media. Talk about a role model of hard work and perseverance. Ware is an exceptional one.

Bernard, John Ware's daughter, Nettie, did what she could to get her father recognized in Alberta as an important pioneer.

Paul, thank you. John Ware was known as a man's man.