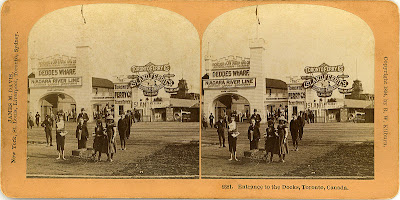 
Before the Toronto Islands were islands it was a peninsula attached by a narrow neck of land at Cherry Street. The local First Nations used the peninsula for restorative purposes. Michael O’Connor owned the first ferry in 1833 named ‘Sir John of the Peninsula’ and charged his customers 7 1/2 cents per trip to and from the Island. George Heathcote expanded on the idea with his steam ferry which ran from 1835 to 1851.

In 1843, Peter and Louis Privat purchased the Peninsula Hotel on the island, added an amusement park and small zoo, and to bring paying guests over they advertised trips across the Bay on their horse-powered ferry. These ferries were sixty feet in length with paddle wheels on either side of their hulls. The paddle wheels were turned by the efforts of horses moving a treadmill to which clockwise gears were connected.

The Privat Brothers had competition in their hotel business when Reubon Parkinson, a carriage builder, built a hotel on Maskelonge Point (now Mugg’s Island). When their businesses conflicted too often, Parkinson moved his dwelling eastward and located it upon the sandy neck of land connecting the Peninsula with the mainland. A severe storm in 1858 washed away his hotel and created the Eastern Gap.

The year 1851 brought more steam-powered ferries to the Bay Ferry terminus which outran the horse-boats effectively putting them out of business. 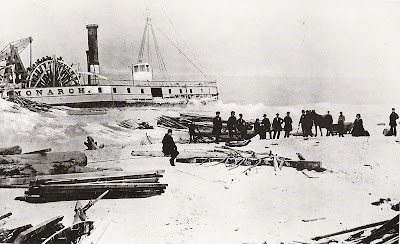 [ In 1856 the steamer, The Monarch, became stranded in ice just off the Islands]

The first moonlit cruises were started in 1861. 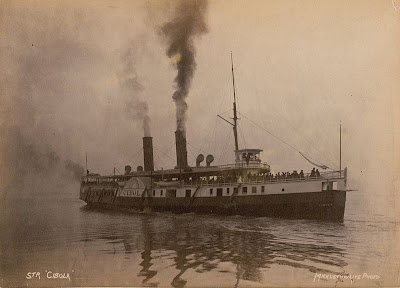 The Cibola built in the early 1880s to ferry passengers from Toronto to certain points on Lake Ontario was destroyed in a fire in 1895 at the Lewiston Dock on the Niagara River. The Cibola’s three-part chime whistle was placed on the Corona, constructed in 1896 as a replacement.

After 1882 the ferries were constructed to carry larger crowds to the Islands. In 1890 the Toronto Ferry Company came into existence with fourteen ferries, one being The Mayflower. This two-decked paddle wheeled ferry was licensed to carry 1,000 passengers, and carried the novel distinction of new electric lights. The Mayflower continued the ferry runs for 53 years before being retired and stripped into a barge to haul garbage to the Inspector Street incinerator.

According to Wikipedia: “In 1906 and 1910, the Toronto Ferry Company built two sister ships, both being double-decked double-ended paddle steamers, with a capacity of 1450 passengers. They were named Bluebell and Trillium. They were retired in 1955 and 1957 respectively, but Trillium survived and re-entered service in 1976. She is still in service and is operated by the Great Lakes Schooner Company for Corporate functions and Private Functions, as well as ferry runs throughout the summer.” 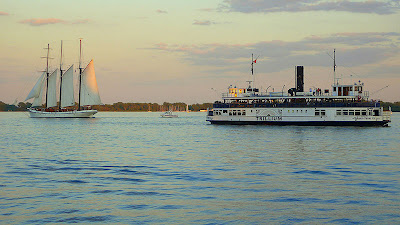 The ferry service continued to operate until April 1926 with decreasing patronage and poor equipment. That year the City purchased the ferry fleet and assorted buildings in L.J. Solomon’s ownership on the Island.

The Toronto Transportation Commission took over operation of the ferry service on April 15, 1927 and found the vessels were in need of immediate repairs, the Hanlon Point Docks were so unsafe that there was no guarantee that any boat tied up to it wouldn’t pull it off its moorings. New ferry docks were constructed at the foot of Bay Street with the Bay and Dupont streetcar lines extended to them. These were replaced later by the Bay bus route. In the early 1970s the new Queen’s Quay docks were located just east of the old ones.

An earlier post on the Toronto Islands provided bits of history and how the islands were developed over time can be seen here.

Photos and further information on the ferry service and the boats can be seen in the links listed in the sources.

Travis Erwin from Amarillo, Texas is the founder of My Town Monday. For other locations to visit please go to Travis' site here.
Posted by Barbara Martin at 23:50

I am in awe of your ability to find such interesting spots around your town to highlight and tell us about!

In this post, I particularly love the images. They are simply out of this time, and also great storytellers.

May your week be filled with sunshine and joy! :-)

Too bad they were replaced by a bus route. A bus just doesn't seems as cool.

I love ferries. And I especially love that poem by Edna St. Vincent Millay.

Merisi, Toronto and area are filled with snippets of interesting history.

Patti, my favourite ferry rides are from Horseshoe Bay in West Vancouver to Nanaimo on Vancouver Island, and the one from Victoria to Port Angeles, WA.

Fond memories, Barbara, of Sunday afternoon picnics on "The Island" when I was young and things were different!

Nice post- thanks for the memory lane trip. There seems to be a MTM water theme this week!

I've always found ferries rather romantic. Or maybe it's the idea of living on an island.

It's interesting how nature can change how things look. I always look forward to new pieces of history, Barbara. You never disappoint me :-)

You were early to utilize the technology of the day! A very interesting story, and such veteran ships interest me. Good to see that they mange to take care of at least one of them.

Since I wrote my last book, I have a huge fascination with stereoscope pictures. Thank you for this one!

Interesting Barbara, thank-you! The photo or the ferry stranded in the ice is very dramatic. Black and white photography lends itself to the stark and dramatic obviously but what a photo!

Jenn, we must have been on an intuitive wave length for water themes.

Charles, travelling to an island is escapism.

Debra, thank you for your kind words.

RuneE, Canada has an interesting shipping history which I will try to cover in subsequent posts.

L.A., we were cheated on this one, as usually there are two different photos for the postcard.

Pam, the photo of The Monarch caught my eye when I first saw it. It speaks volumes.

I love those old steamers! They look so atmospheric and I can almost hear the sound they make as I look at the photos.

Barbara, Great post. I think I mentioned this before but I really love old photos and of course, the history is fascinating. I recently re-discovered some old photos of my family and I will try to post them on the next MTM.

L.A., it just dawned on me what you were talking about. The handheld apparatus used at the turn of the last century to view photographs, the forerunner slides.

Raph and David, I love old photos too. They all have intresting stories to tell of the time.

Terrie and Mary, thank you.