The Recollets, the first priests to come to New France in 1615, brought their ambition to convert North America’s native people.* 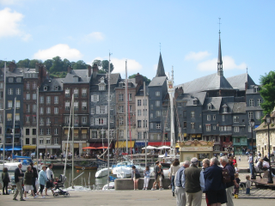 Joseph Le Caron (1586, near Paris—March 29, 1632, France) was one of the four Recollets, the first priests to come to New France in 1615 with Samuel de Champlain, (together with Father Denis Jamet, their first Superior, Father Jean D’Olbeau, and Brother Pacifique du Plessis), and the first missionary to the Hurons. On April 24, 1615, they sailed from Honfleur [photo] aboard the St. Étienne. Le Caron reached Tadoussac on May 25 where his garb perplexed the Indians: “a form of what was common to the brotherhood of Saint Francis, consisting of a rude garment of coarse gray cloth, girt at the waist with the knotted cord of the Order, and furnished with a peaked hood, to be drawn over the head. His naked feet were shod with wooden sandals, more than an inch thick.”Δ In a few days Le Caron accompanied some fur-traders to Saint-Louis rapids, to meet the Hurons there and attempt to follow them into their own country. 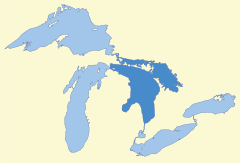 He was the first to visit their settlements and preach the Gospel by making the 1,100-km voyage following the Ottawa River as far as the Mattawa, the Mattawa as far as Lake Nipissing, and then the French River to Georgian Bay. He was the first European to see Lake Huron [photo], which he reached by the end of July, a few days before Champlain arrived. On August 12, 1615 he celebrated the first mass in Huron country, in the presence of Champlain. Le Caron stayed with the Hurons about a year (1615-16), and was again among them in 1623, accompanied by Father Viel who contributed significantly to Le Caron’s dictionary of the Huron language and Brother Gabriel Sagard. He was also compiling dictionaries of the Algonkin and Montagnais languages. At that time he evangelized the Montagnais of Tadousac and taught them to read and write.

The best known of these, Gabriel Sagard, made only one return voyage into the Upper Country, in 1623-1624. His account, Le Grand Voyage du pays des Hurons […], became an indispensable work about the Huron people. Sagard's voyage did not contribute to the expansion of New France, but the information that he gathered from the Native peoples on far-away areas helped other voyagers. Among other things, he wrote the first phrasebook of the Huron language.

[trans.]
”Sometimes also one has great difficulty in making a passage with head and hands through dense woods, in which also a great number of trees that have rotted and fallen on one another are met with, and these one must step over. Then there are rocks and stones and other obstacles which add to the toil of the trail, besides the innumerable mosquitoes which incessantly waged most cruel and vexatious war upon us; if it had not been for my care in protecting my eyes by means of a piece of thin stuff which I had covering my face, these fierce creatures would have blinded me many times, as I had been warned. It had happened so to others, who lost the use of their eyes for several days, so poisonous is their stinging and biting to those who have not yet become acclimatized.”
(Sagard 1939, 63)

In 1625 Le Caron was once more in France, returned to Canada a year later, was elected superior of his order at Quebec, and filled this office until the capture of Quebec by the English in 1629, when he and his colleagues were sent back to France by the conquerors.

Le Caron died of the plague in the convent of Ste.-Marguerite in France, where he was superior, on 29 March 1632, 46 years old, the very day the Treaty of Saint-Germain-en-Laye was signed which restored Canada to France . The Collège Édouard-Montpetit in Longueuil, Quebec has a pavilion named in his honour.


Source: http://en.wikipedia.org/wiki/Joseph_Le_Caron
http://www.biographi.ca/009004-119.01-e.php?BioId=34481
http://oce.catholic.com/index.php?title=Joseph_Le_Caron
*The Illustrated History of Canada, edited by Craig Brown p.106
Δ The Pioneers of France in the New World
Posted by Barbara Martin at 00:37

This was really interesting. I didn't realize there were Jesuits with French explorers before Joliet. I tried to read the quote in French, but my one year in high school was too little, too long ago. I'm surprised they had such a bad reaction to mosquito bites.

Teresa, my grandmother who came from England found the biting insects of Canada to be terrible her whole life here. When I went to the Scottish highlands the black flies and midges there bothered me to no end. If a person is born in an area where there are biting insects they develop a partial immunity to them.

I am SO pleased that you gave us the original quote. Thank you so very much.

Chris, there are two other visitors who are particular about where I get my material from. This was for them; however, it appears you may be added to that list.