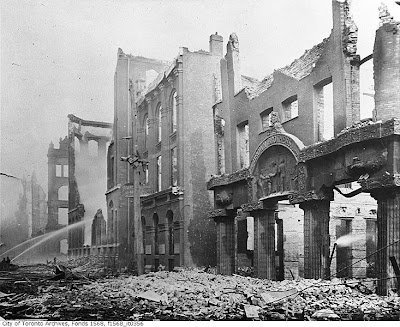 The Great Toronto Fire of 1904 destroyed a large section of downtown Toronto, Ontario, on April 19, 1904.

The fire was first spotted at 8:04 p.m. by a constable on his regular street patrol. The flames were rising from the elevator shaft of the Currie neckwear factory at 58 Wellington Street West, just west of Bay Street. The factory was located in the centre of a large industrial and commercial area. The exact cause of the fire was never determined.

The fire began on the evening of the 19th and took nine hours to get under control. The glow of the fire could be seen for kilometres in all directions. Firefighters from cities as far away as Hamilton, Ontario and Buffalo came to Toronto's aid. The battle was made more difficult by strong winds and sub-zero temperatures. The temperature that night was approximately -4 degrees Celsius (24F) with winds at 48 kilometres per hour with snow flurries. 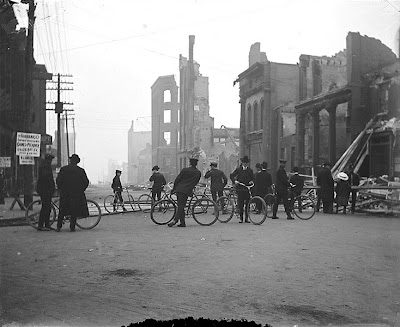 The fire destroyed 104 buildings on about twenty acres of land, but killed no one. It caused $10,350,000 in damage and put five thousand people out of work, at a time when the city only had 200,000 inhabitants. As a result of the fire, more stringent safety laws were introduced and an expansion of the city's fire department was undertaken.

It was the largest fire ever in the city, although a previous large fire had consumed many city blocks on April 7, 1849 when the city was much smaller and constructed mostly with wood. 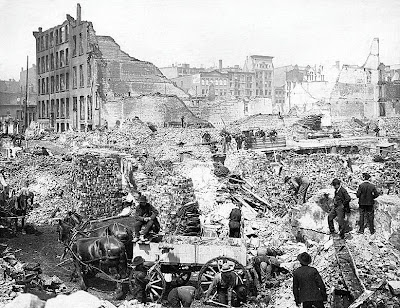 
The legacy of this fire includes Call Box 12, which was used to sound the alarm and now is the name for the volunteer canteen truck supporting Toronto Fire Services today.

Travis Erwin from Amarillo, Texas is the founder of My Town Monday here.
As Travis is moving house this week, for other locations to visit please go to Jenn Jilks' site here while she temporarily holds the reins.

You always have such fascinating posts! With great photos! Love the Call Box 12 detail.

Those stark black and white photos make Toronto look like a war zone.

It seems that all big cities had at least one major fire and in Toronto's case, two. Thanks for the great pictures.

I love the pictures, Barbara. They are amazing.

but no deaths??????? Imagine that, firemen all the way from Hamilton and Buffalo too!

The pictures look like some of the sets for Heroes episodes!

great pictures to go along with a great post. I'll never quite look at fire or those who feel it's wrath the same way.

My apologies for not replying to your comments today, but I was undergoing a battery of tests for chemical poisoning resulting from the water leak a week and a half ago. The Toronto Board of Health have a couple of jars of water samples, one with yucky sediment in it and the other with a strange oil. It appears that tap water isn't as safe as they say it is.

What a fascinating post, Barbara!. Fire is so incredibly powerful. The devastation is amazing.
I hope you feel better soon. So sorry about the water situation.

Debra, fire is a scary element when it gets out of hand.

I'm doing a citrus fruit, prune and apple juice detox to help rid my body of the noxious stuff. Strange, I want to know and not know what the water tests reveal.

That seems like utter devastation. I have said this many times. But your choice of images complement your writing very well.

Such devastating fires seem to have been rather common around the turn of that century. I suppose building and security didn't go quite hand in hand.

How awful, Barbara! Hope the detox helps. It's probably a good idea to do something humorous and distracting to keep you from worrying about it.

Raph, probably frequent visits to your blog will do the trick.

It would be a good setting for a story since no one knows how the fire started.

Hope you get your water problem sorted out. That sounds scary too.