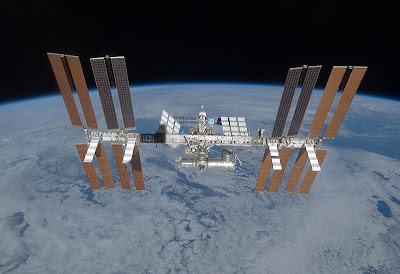 At one time explorers who sailed the Atlantic Ocean to the New World were embarking on a dangerous journey into unknown territory. They were followed by men who sought the North and South Poles. Space travel by private citizens was only dreamed about.

Today U.S. billionaire tourist, Charles Simonyi, on board a Soyuz capsule carrying a Russian cosmonaut, Gennady Padalka, and an American astronaut, Michael Barratt, docked at the International Space Station. This is Simonyi’s second trip as a paying customer to the space station. He will be returning to Earth on April 7 with cosmonaut, Yuri Lonchakov, and NASA astronaut, Michael Fincke. Any future trips will be put on hold as the space station’s permanent crew is expanding from three to six.

It is only a matter of time before other private citizens will be taking space trips.

some day, would be nice

Have you booked your space tour yet, Barbara? It sounds fun.

I don't know how I feel about that. Can you buy your way onto anything?

We'll be taking bookings here at Camelopardalis right away - for our bloggy friends!

Paul, I thought so too.

Josh, it would be just like flying in a jet except farther up. When I flew the overseas flights to the UK and Europe, I could see the curvature of the earth on the horizon. To me, that was thrilling.

As was the time when at age 7 when I went with my family to meet my grandmother at the Edmonton airport who had travelled from Halifax. It was a big deal then.

The timeframe here is forty years and avaiation made progress with commercial airlines. Who is to say what will happen in the next forty or fifty years? I may not live long enough to see it personally, but I hope to.

Teresa, my pockets aren't quite that deep, but I would love to go.

Patti, people have always been able to pay for just about anything.

Raph, that would be wonderful. Can humans squeeze through the portal too?

I dunno, I'd visit Toronto again before I went to space :)

If I had enough money, I'd be up there, but somehow I don't see it happening. Not unless the price drops a whole bunch! It would be so awesome, though.

Wow. That's quite the big adventure I'd say.

There's just something wonderful about that.

Not that I don't respect Mr. Simonyi's choice of dream vacations, I think I'd rather visit Baron Canyon if given the choice. :)

What a wondrful thing to explore space to go beyond the frontiers of the known world, to seek new worlds...Great post Barbara!

I think it would be fantastic to embark on a journey outside the stratosphere. Seeing our blue world from outside. Saying that, to a mere human immortal like me, it is more satisfying to see photos like the ones from your journey (previous post) than to see the planet as a whole. But that's just me. Excellent two posts. Many thanks.

Gary, one must always weigh the risks and yours may be the better choice at this time.

Linda, as I had mentioned earlier in the comments about my grandmother, her first trip across Canada was by railroad in 1905 when airplanes were in their infancy. The Wright Brothers had made their first flight in December 1903. In the mid-1950s she was flying with commercial airlines. So it is possible by the time we are very gray-haired and a bit feeble there is a chance of going. I would love to go up there.

Pam, it would be so much fun.

Charles, I thought exactly the same.

Bernard, terra firma under one's feet appeals to many people.

Wil, one must keep an open progressive mind for the future.

Cuban, I have many more out of the way places to explore before I do any space hopping.

Tony, whatever the price tag was would certainly be out of my range at this time. Fares do drop once more people begin to travel on commercial carriers, and flights to an enlarged International Space Station to accommodate their visits could be forseen.