This post belongs to the first of a series of hikes, which is an 11-day backpacking trip from Kananaskis, along the Continental Divide to Yoho National Park. Today’s post covers the tenth and eleventh day.

The trail down the valley starts near the Helmet warden cabin located across Helmet Creek from the campsite. After a distance of 600 metres the trail branches to the left to go to Goodsir Pass. When looking back down the trail, there will be good views of Helmet Falls. The hiker will climb steadily to the summit on a moderate slope, a distance of 4 km. Goodsir Pass (2,210 m (7,249')) is in a pleasant, flower-filled larch meadow, and offers fine views of Mt. Goodsir and the rest of the Ottertail Range in Yoho National Park. Midway through the pass is the boundary for Yoho National Park. Yoho in the Cree language means “awe”. 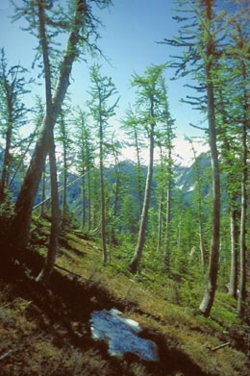 [1-Larches] These trees are the only conifers that shed their needles every fall to conserve energy, yet before falling off the larch needles turn golden in colour. 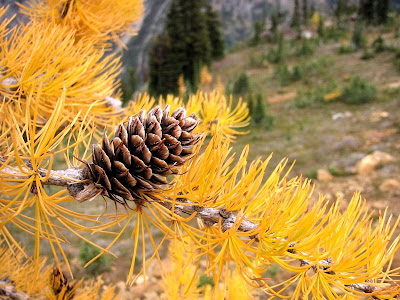 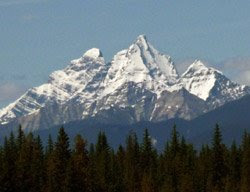 Sir James Hector, who named the Goodsir Towers, had studied medicine in Edinburgh, Scotland. John Goodsir (1814-1867) was Hector’s anatomy instructor at the university, one of the first to research cell life. Hector knew that John had a brother who was also a medical doctor. Hector named the twin high peaks after the Goodsirs. The north tower is slightly lower (3524 m) while the south tower (3562 m) is the highest peak in the vicinity (and also the tenth highest peak in the Canadian Rockies). Goodsir Pass commands an outstanding view of these twinned towered, and not often climbed, peaks. 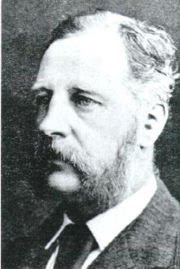 [4] Sir James Hector (1834-1907) was a predominant explorer in the Canadian Rockies and a member of the famous Palliser Expedition of 1857-1860. His role, besides exploring and naming mountains, was that of geologist and surgeon (he studied medicine in Edinburgh, Scotland). Hector will always be remembered for the incident that occurred along the Great Divide near Lake Louise. Hector got kicked so hard by his horse that his comrades gave him up for dead. It was only after a significant amount of time had passed that Hector recovered. To commemorate the incident, the pass is now called Kicking Horse Pass. Hector is also remembered by a beautiful mountain. Mount Hector (3394 metres) has the distinct reputation of containing one of the greatest ski runs in North America. 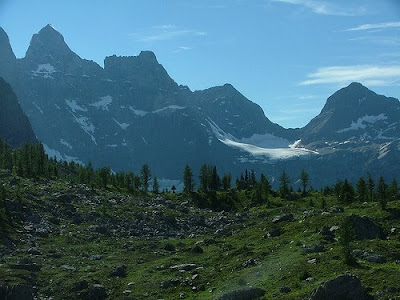 Long switchbacks descend to Ottertail River at 4855 ft – mile 88.2. Hikers are to note there is no water on the trail which descends 2,400 ft/720 m in thick lodgepole pine forest. At the river, filled with grey glacial water, the trail turns downstream, going past the warden cabin to McArthur Creek campground. Parks Canada states that tents are to put up 100m from the water. 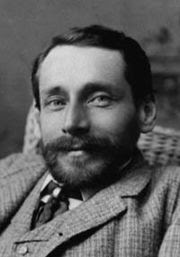 
The Ottertail River was named by the famous topographic surveyor George Dawson (1849-1901) who learned the name of this river from the local aboriginals. Apparently, Ottertail was his understanding of their name. 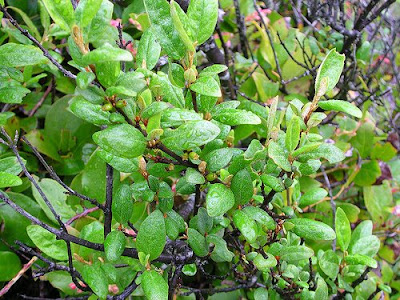 
While walking down the trail it is important to be on the lookout for bears eating buffalo berries. Bears eat these to fatten themselves for winter. This year the berries were late in ripening due to a cold spring.

For hikers planning on going on through to McArthur Pass to Lake O’Hara via the McArthur Creek Valley Trail, a special permit is to be obtained for access after August 15th. McArthur Valley is known for its rich buffalo berry patches and larger populations of black bears and grizzly bears. This trail is closed every year from May 1 to August 15 to protect Grizzly habitat and avoid problems. When it is open there is a quota system for its use. This trail is not maintained and good route finding and wilderness skills are essential. The permits are to be obtained three months in advance. Restrictions include two hiking parties per week in a group size of a minimum of six to deter grizzly encounters. Camping is not permitted in McArthur Valley, nor are campfires. A camp stove may be used. 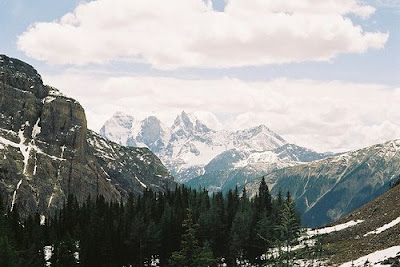 McArthur Creek was named after James McArthur (1856-1925) of Alymer Quebec who performed much of the survey work along the 49th Parallel through the Canadian Rockies. McArthur helped to survey the railway through the Rockies and is also credited with ascending the first summit in the Rockies over 3050 metres.

From the McArthur Creek Campground the trail down the Ottertail fire road is an easy and scenic 15 km hike down to the trailhead located on the Trans-Canada Highway 8.4 km west of Field. A stop can be made about halfway down at Float Creek where there is a campground.

Nice post, and the photos were excellent. And thanks for sharing the info :)

I love old photos and how rare is it to see someone smiling like George Mercer Dawson from 1885.

Sekhar, I try to put some history with the hiking posts. There were many people instrumental in the founding of this country.

David, I noticed how amused he was while being photographed. Despite having a spinal disorder from TB he managed his geological surverying very well.

These pictures take my breath away.

Leigh, then I will locate more inspiring photos.