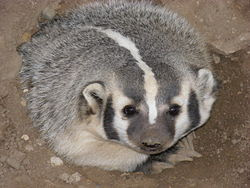 In Ontario, the badger is found in the southwestern part of the province, mostly close to Lake Erie in Haldimand-Norfolk County, and in northwestern Ontario in the Thunder Bay and Rainy River Districts. There are thought to be 218 individuals in Canada. Protection provided by Ontario's Endangered Species Act, 2007 prohibits actions such as killing, capturing, possessing, and selling or trading this species. Badger dens are protected under the Fish and Wildlife Conservation Act. Nearly all the sites in Ontario where the badger lives are on private land.

This animal prefers dry open areas with deep soils that are easy to dig, such as prairie regions.

The video shows an American Badger digging a burrow. A badger can dig a hole faster than a man with a shovel.


The American Badger has most of the general characteristics common to badgers; stocky and low-slung with short, powerful legs, they are identifiable by their huge foreclaws (measuring up to 5cm in length) and distinctive head markings. Measuring generally between 60 to 75 cm (23.6 to 29.5 inches) in length, males of the species are significantly larger than females (with an average weight of roughly 7 kg (15.5 pounds) for females and up to almost 9 kg (19.8 pounds) for males). Northern subspecies such as T. t. jeffersonii are heavier than the southern subspecies. In the fall, when food is plentiful, adult male badgers can exceed 11.5 kg (25.3 pounds).

Excluding the head, the American Badger is covered with a grizzled, silvery coat of coarse hair or fur. The American Badger's triangular face shows a distinctive black and white pattern, with brown or blackish "badges" marking the cheeks and a white stripe extending from the nose to the base of the head. In the subspecies T. t. berlandieri, the white head stripe extends the full length of the body, to the base of the tail. 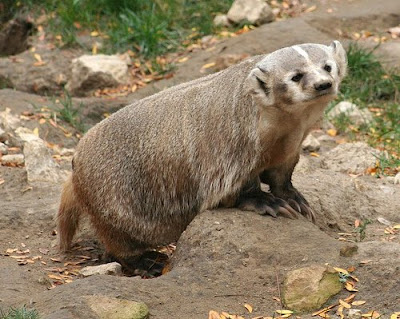 
The American Badger is a fossorial carnivore. It preys predominantly on pocket gophers, ground squirrels, moles, marmots, prairie dogs, pika, woodrats, kangaroo rats, deer mice and voles, often digging to pursue prey into their dens, and sometimes plugging tunnel entrances with objects. They also prey on ground-nesting birds such as bank swallow or sand martin and burrowing owl, lizards, amphibians, carrion, fish, skunks, insects, including bees and honeycomb and some plant foods such as maize, peas, green beans, mushrooms and other fungi, and sunflower seeds.

They are mainly active at night, but may be active during the day. They do not hibernate, but become less active in winter. A badger may spend much of the winter in cycles of torpor that last around 29 hours. They do emerge from their dens on warmer days.

Badgers sometimes use abandoned burrows of other animals like foxes or animals slightly smaller or bigger. Badgers are normally solitary animals for most of the year, but it is thought that in breeding season they expand their territories to actively seek out mates. Males may breed with more than one female. Mating occurs in the summer, but implantation is delayed (similar to bears) and the young are born in an underground burrow during late winter. Litters consist of one to five offspring.

Although this video was filmed in Yellowstone National Park, it shows a mother badger with 2 kits on the move. When they reach the sagebrush they become almost invisible.


American badgers will sometimes form a symbiotic relationship with Coyotes. Because coyotes are not very effective at digging rodents out of their burrows, they will chase the animals while they are above ground. Badgers on the other hand are not fast runners, but are well-adapted to digging. When hunting together, they effectively leave little escape for prey in the area.

Well Barbara it just goes to show you,you live and learn something everyday I didn't know you guys had Bagers WOW ! I love the photo's facts and videos thankyou so much for sharing this !!!

Maybe the phrase should be busy as a badger... The video was fun and the symbiotic relationship you mentioned is intriguing.

Philip, sadly, unless people pay attention to the animals around them that are now endangered, humans won't be far behind.

David, these are interesting animals, and sadly, found mostly in zoos.

I didn't realize they were so endangered. Man I hope conservatioin efforts can bring them back. They're wonderful creatures. I've never seen one in real life but seeing them run on camera they look like moving pieces of shaggy carpet.

I don't know these animals... Thank Your for these photos...

There is also the "gaité" here!
Your badgers are adorable. It is a pleasure to watch these videos. Thank you again.
François.

I have a badger living at the back end of my property I've only seen glimpses of it but the den is quite impressive.

Charles, they are interesting creatures to watch.

Webradio, my pleasure to introduce them to you.

François, the European badger, of course, has two distinguishing stripes on either side of its head.

Those who read "Rupert Bear" as a child will recall Rupert's friend, Badger.

Travis, take care your dogs don't go down there. Badgers are known to make short work of dogs bothering them.

In Scotland, a dog low to the ground with a heavy coat was bred specifically to hunt and kill badgers: the Skye Terrier.

Another interesting post, Barbara. I enjoyed the Youtube videos. The relationship with the coyote is fascinating and not something that would occur to me.

Shelley, then you have an interesting bit for a future story.

Cloudia, I agree...they have the cutest faces. But they are one tough little animal.

basically, badgers are CUTE
(and I KNOW it is YOU people in TO sending us this rotten weather darnit, it is just so UNFAIR, and according to my 7th grade history class, the US kicked British butt in 1812 even if you people can prove otherwise)
:)

Gary, you are so funny...the rotten weather isn't really rotten, yet. It's not -40C/-40F, with windchill and blizzard conditions to match.

Your 7th grade history teacher was mistaken. I concede there were certain battles the US won, but in the end after the Treaty of Ghent was signed in Belgium it was clear the US had not won the War of 1812 in the North America region.
The US had been unsuccessful in its invasions of Lower and Upper Canada, while Britain had not made any significant gains, except for the burning of the Pink House and other federal buildings in Washington D.C., for retaliation on the Americans's destruction of Canada's Parliament Buildings in York in 1813. The British did return the seized 10,000,000 acres, weapons, boats, and prisoners to the United States. Except the British paid 250,000 Sterling for the slaves who didn't want to return.

Barbara, I don't know what made you think of doing this post, but I loved it! Your posts are always such a treasure trove of information.

Rick, badgers are one of my favourite animals, and now they are almost extinct in Canada.

Amazing the badgers and coyotes inadvertently work together like that. Badgers are amazing creatures.

I like Britas but the water always still smells funny to me. I'm too picky about my water, LOL.

What a fascinating post! Badgers seem so adaptable, I'm a little surprised they are endangered. I haven't seen any badgers here in Southern California yet.

It's a shame how many wonderful species are endangered. Big shame.