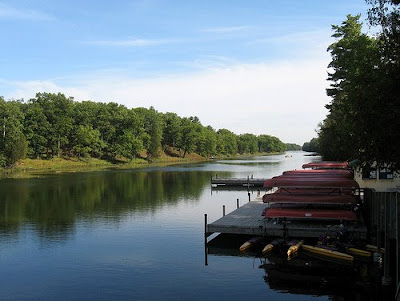 [1-Ausable Channel] The Old Ausable Channel is a wide, slow-moving river which flows through the park. It was separated from the main Ausable River when two channels were excavated at Port Franks and Grand Bend at the end of the 19th century. This river was called Riviere aux Sables or "sandy river" by the French which through time became the Aux Sables River in English. The name was condensed to Ausable in the early 20th century.

Pinery Provincial Park is on Lake Huron north-east of Sarnia, where there is camping in three campgrounds with 1,000 sites, some including electrical campsites, hot showers, washroom facilities and other amenities. The park consists of 2,532 hectares. 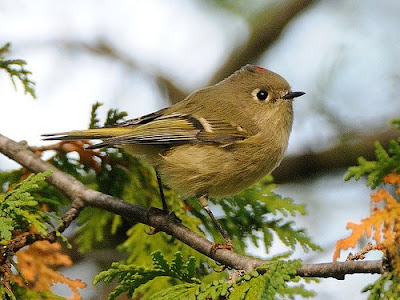 [2-Ruby Crowned-Kinglet] This bird is rarely seen in summer as it nests high in the trees, constructing its nest of tightly woven out of grasses, bark and feathers suspended from a branch. For a small bird (4 1/4 inches) it lays a large clutch of 5 to 12 creamy white eggs with brown and gray speckles. These are incubated for 2 weeks and the young leave the next two weeks later. This bird feeds mainly on insects but will eat fruit. Its habitat is coniferous, mixed woodland and thickets. 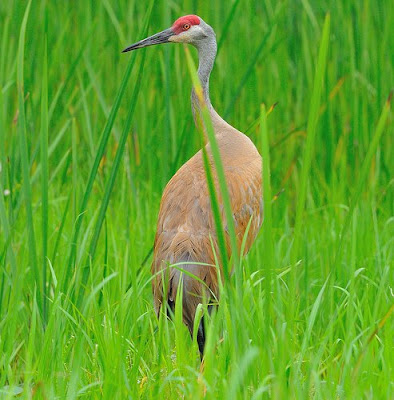 [3-Sandhill Crane] This long-legged bird is 34 to 42 inches tall with a wingspan of 73 to 90 inches). It is capable of skipping and hopping, leaping as high as 20 feet into the air. These birds are usually seen in flocks of 20 to 100 individuals and feed on insects, small animals, and spilled grain. They breed on the Arctic tundra and also in isolated marshes further south where a large pile of vegetation is used to make a nest for two eggs. After both parents have incubated these for about a month the young quickly leave the nest. They are capable of flight at 10 months but stay with the parents until the following spring. They spend the winter in the south and the summer in the north. 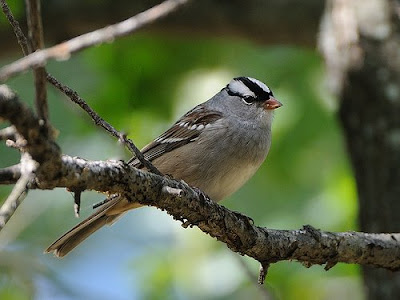 [4-White Crowned Sparrow] These birds are 7 inches long. They are found in the tundra, alpine meadows, and boreal forests, woodland edges, scrubland and thickets. The males learn their songs within the first few months of life from their environment, and because they tend not to move from their territories, song dialects emerge. They are influenced by daylight hours, and birds in the extreme north will often sing through out the night. It weaves a grass nest high in a tree and lays 3 to 5 pale blue eggs with red-brown spots. The female incubates these for 12 to 17 days and the young are fledged 10 to 12 days later. They move in mixed flocks, usually with White-throated Sparrows. Thid bird's diet consists mainly of seeds, grains, and insects for which they forage on the ground.

There are 319 species of birds and 32 species of mammals including the red squirrel, chipmunk, raccoon, beaver, flying squirrel, and white-tailed deer seen most often on the bicycle path. 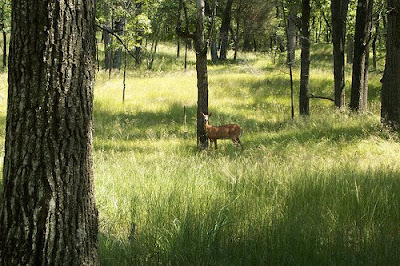 For fishing enthusiasts there are perch, salmon, rainbow trout, bass, panfish, and pike available in the Ausable River channel and in Lake Huron.

Several hiking trails go through mature oak and pine forest along the Ausable River, and other locations throughout the park. 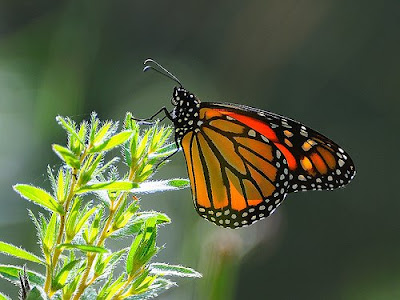 On the shore of Lake Huron, vast waves of sand dunes roll back to meet stands of towering oaks, the largest oak savanna woodlands remaining in North America. There are boardwalks, bicycle trails and sand beaches to be enjoyed summer and winter. 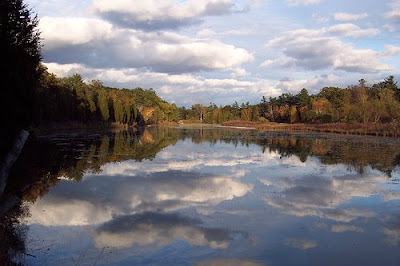 The pinery park seems to be very beautiful, we lose it with pleasure.
Everything is beautiful, fauna, flora, water, and trees.
As long as human beings continue to preserve these sites.
Thank you Barbara.
François et MTA.

Very nice mix of wonderful creatures; and the first picture made me wish I was throwing a line in the water both from the pier, and the sunny bank.

Beautiful wildlife. I'd love to see these birds. I've always enjoyed seeing turtles on a log sunning too.

Have you read Peter Matthiessen's crane book, "Birds of Heaven"? I highly recommend it.

SO VERY lovely!
Thanks for this healing place to visit. Aloha-

Marie, I am hoping my posts serve as a reminder to readers that each of us should take responsibility in environmental concerns to ensure these parks and areas are preserved.

Bernard, tranquil water has a relaxing effect on most people.

Charles, I have more photos of birds from this park which I will post at a later time.

Merisi, unfortunately the time for Indian Summer weather has passed: often in October in Ontario and September in the prairie provinces of Alberta and Saskatchewan.

Thank you for the book recommendation.

Cloudia, the first photo has the same effect on me...true peace and solace.

Been here, Barabara. years ago though.

ontario i so amazing in its diversity, but i can't stand the high humidity, of the 'golden horseshoe', especially....

These pictures and so crisp and breathtaking. Would love to be there right now, too.

Thanks, as always, Barbara :)

Patti, then you have nice memories I hope.

Tony, I have trouble with the humidity as well; but eating hot peppers helps in the summer heat.

L.A., probably a bit more than crisp now. Frozen and the area received more snow than Toronto did.