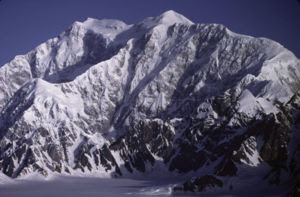 Mount Logan is Canada’s highest mountain at 5,959 metres (19,551 ft) and the second highest peak in North America, after Mount McKinley. 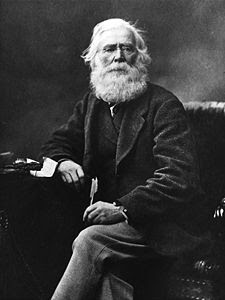 The mountain was named after Sir William Edmond Logan. His abilities as a geologist were noticed, and in 1842 he was asked to establish the Geological Survey of Canada where he was the first director from 1842 to 1869. In 1855, he recruited Robert Barlow as the survey's chief draughtsman. During this time he described the Laurentian rocks of the Laurentian mountains in Canada and of the Adirondacks in the state of New York. Over his illustrious career he received 22 medals including the Legion of Honor from Emperor Napoleon III of France in 1855 and a knighthood from Queen Victoria in 1856. In the same year he was awarded the Wollaston Medal by the Geological Society of London.

Mount Logan is located within Kluane National Park and Reserve in southwestern Yukon and is the source of the Hubbard and Logan Glaciers. Logan reportedly has the largest base circumference of any mountain on Earth. Due to active tectonic uplifting, Mount Logan is actually still rising in elevation. 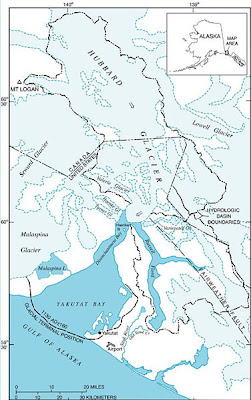 Hubbard Glacier is a tidewater glacier located in the U.S. state of Alaska and the Yukon Territory of Canada. From its source in the Yukon, the glacier stretches 122 km (76 mi) to the sea at Yakutat Bay and Disenchantment Bay. It is the longest tidewater glacier in Alaska, with an open calving face over ten kilometers (6 mi) wide.

Hubbard Glacier’s longest source, 122 km from its snout, is at about 11,000 feet above sea level, about eight kilometers west of Mt. Walsh. A shorter tributary glacier begins at the easternmost summit on the Mt. Logan ridge at about 18,300 feet.

Of late the majority of glaciers around the world are melting at alarming rates. However, the Hubbard Glacier which is joined by the Valerie Glacier to the west, and through forward surges of its own ice, has contributed to the advance of the ice flow that experts believe will eventually dam the Russell Fiord from Disenchantment Bay waters. 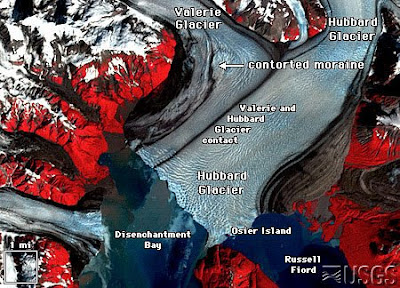 
The Hubbard Glacier ice has continued to advance 5.5 metres per year for about a century. The ice at the foot of Hubbard Glacier is about 400 years old: it takes that long for ice to traverse the length of the glacier. The glacier routinely calves off icebergs the size of a ten-story building. Where the glacier meets the shore, most of the ice is below the waterline, and newly calved icebergs can shoot up quite dramatically, so that ships must keep their distance from it as they ply their way up and down the coast.

I didn't know any glaciers were still growing. Kind of glad to hear about this one. In a weird kind of way.

Thanks for sharing the highest mountain in canada called mt. logan

Charles, it is Mt. Logan itself that is still growing due to the teutonic plates underneath shifting. There have been many large earthquakes in and around Alaska for the past three years, including near this location. It is this lifting of the land which is causing the glacier to move forward.

Redlan, it is my pleasure to provide this information to my readers.

A mountain (not a volcano) growing taller, wow!
I am thoroughly impressed with Logan's long career. You can imagine a project like that would be quite amazing, but with the equipment and technology of the mid 1800s????

Very interesting post, Barbara. This is an area I know nothing about. Thanks for highlighting Mt. Logan for us.

Barbara, fascinating and again, very well presented with beautiful pics. You make me feel so pendantic and frivolous! My posts seem to be "less about you, more about me!" Your posts are very entertaining and educational and I'm stuck in "funny girl" mode. Did get a new camera and am working up an MTM post...if I can figure this out!

You're the master, thanks again for the delightful info!

perhaps time for a new version of 'logan's run'?

grats on the award, btw... i was beat to the punch

never mind, i give you one, anyway :)

Gary, I'm quite certain that William Logan was of the opinion that he was using the most modern of instruments for his time.

Bernard, Linda, only when I was looking up material on Mt. Logan did I uncover the information about the land mass rising. This surprised me as much as everyone else.

Robin, my posts are on topics that interest me first before I take readers into account. Then I look through the research material to see if there is something unique that I and others would find interesting.

It is very kind of you to say that I'm a master, when, in fact, I still have not figured out how to put a link within the post itself. It has to do with inserting hyperlinks, but as to actually placing it...

Tony, as long as the movie isn't anything like Soylent Green.

did you not see the flick, 'logan's run'?, spooky, like 'soylent green'

one set on mt.logan would be a different kind of 'run' ;)