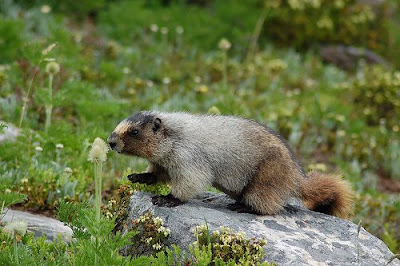 [1]
The hoary marmot (Marmota caligata) is a species of marmot that inhabits the mountains of northwest North America. The largest populations are in Alaska. In the northern part of that state they may live near sea level. Hoary marmots live near the tree line on slopes with grasses and forbs to eat and rocky areas for cover. It is the largest North American ground squirrel and is often nicknamed "the whistler" for its high-pitched warning issued to alert other members of the colony to possible danger. The animals are sometimes called "whistle pigs." Whistler, British Columbia, originally London Mountain because of its heavy fogs and rain, was renamed for these animals to help make it more marketable as a resort.

The "hoary" in their name refers to the silver-grey fur on their shoulders and upper back; the remainder of the upper parts are mainly covered in reddish brown fur. The underparts are greyish. They have a white patch on the muzzle and black feet and lower legs. 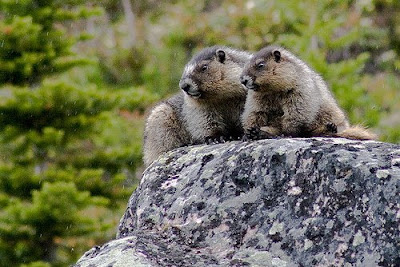 These animals hibernate 7 to 8 months a year in burrows that they excavate in the soil, often among or under boulders. Mating occurs after hibernation and 2 to 4 young are born in the spring. Males establish "harems," but may also visit females in other territories. Predators include golden eagles; grizzly and black bears; and wolves.

Unlike most animals their size, hoary marmots are not shy around humans. Rather than running away at first sight, they will often go about their business while being watched.

I've got such a gray squirrel problem here. I'm glad I don't have any of these big buggers.

As for the marmots, I've always like looking at them in the mountains. This variety are quite cute, as the others are a brownish colour.

Since they hibernate seven to eight months a year, these little fur-balls probably don't get into as much trouble as the squirrels. :)

So *that's* what Scoutmaster Dan meant when he asked if we wanted to pet his Hoary Marmot... ;-p

Bernard, they stay close to whatever they can hide in in case a predator comes. However, I don't recommend trying to pick one of these up, as a friend who worked with BC agriculture did and acquired some ticks.

Travis, looking at is certainly a good idea.

Gary, according to Wikipedia... Most marmots, such as yellow-bellied and hoary marmots, live in rocky and mountainous areas, but the woodchuck is a lowland creature. They are one and the same.

Steve, I think you have a loaded comment there so I'm not biting.

Well, if they are like woodchuck, then they probably taste the same. Not bad with hot sauce. ;)

But seriously, I'm always on my father-in-law for killing snakes and then complaining about the chipmunks. No matter how cute, all critters need something to keep them in check. Look what has happened now that lions and tigers and bears aren't eating enough humans!

"Ah Yes!" I thought, as I saw a little creature on this post. You know how I love them, and some from other countries are new to me.This was delightful Barbara, thank you. Will put catching up with these on my "to do" list when I eventually get to your part of the world. Notice I said when and not if?

J.L., welcome. As for controlling human population there are only a few: viruses, natural and man-made disasters.

Pam, I've been trying to stick to the endangered or threatened species, but these critters have neat coats.

thanks for all the stuff about china, im really looking forward to it.

Thak you for you kind comments on my blog.

What wonderful pictures of these Marmots, how lucky you are to be able to photograph them.

Now to spend some time looking at your other photos.

I'm sure you know this but thought I would mention that's how Whistler got its name, from these cute little guys! I thought that was one of the coolest name stories ever but then I am crazy about nature.

I'm so glad to hear you may be participating with our dreamboards this month!

Interesting animals, and how cool that they'll go about their business so you can take their pictures. In Appalachia (near where I'm from), "whistle pig" refers to a groundhog.