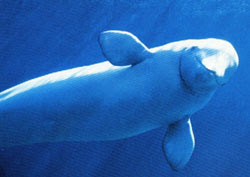 [1]
The Beluga or White Whale (Delphinapterus leucas) is an Arctic and sub-Arctic species of cetecean. This marine mammal is commonly referred to simply as the Beluga or Sea Canary due to its high-pitched twitter. It is up to 5 m (16 ft) in length and an unmistakable all white in color with a distinctive melon-shaped head. The whale is also colloquially known as the Sea Canary on account of the high-pitched squeaks, squeals, clucks and whistles.

[2-Range of the Beluga Whale]

The baby Beluga is usually born grey but not always. This whale is unmistakable when adult: it is all white and has a dorsal ridge rather than a fin. The head is also unlike that of any other cetacean – its melon is extremely bulbous and even malleable. The Beluga is able to change the shape of its head by blowing air around its sinuses. Again unlike many dolphins and whales, the vertebrae in the neck are not fused together, allowing the animal flexibility to turn its head laterally.

The absence of the dorsal fin is reflected in the genus name of the species - apterus is the Greek word for "wingless". The evolutionary preference for a dorsal ridge in favour of a fin is believed by scientists to be adaptation to under-ice conditions, or possibly as a way of preserving heat. Like in other cetaceans the thyroid gland is relatively large compared to terrestrial mammals (three times per weight as a horse) and may help to sustain higher metabolism during the summer estuarine occupations. 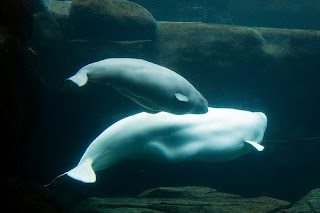 The body of the Beluga is rotund, particularly when well-fed, and tapers smoothly to both the head and tail. The tail fin grows and becomes increasingly ornately curved as the animal ages. The flippers are broad and short - making them almost square-shaped.

In the spring the Beluga whales move to their summer grounds, bays, estuaries and other shallow inlets. These summer sites are detached from one another and a mother will usually return to the same site year after year. As their summer homes become clogged with ice during autumn, beluga move away for winter. Most travel in the direction of the advancing ice-pack and stay close to the edge of it for the winter months. Others stay under the iced area - surviving by finding ice leads and polynyas (patches of open water in the ice) in which they can surface to breathe. Beluga may also find pockets of air trapped under the ice. The remarkable ability of the Beluga to find the thin slivers of open water where the dense ice pack may cover more than 96% of the sea surface is still a source of mystery and great interest to scientists. It is clear that the echo-location capabilities of the beluga are highly adapted to the peculiar acoustics of the sub-ice sea and it has been suggested that beluga can sense open water through echo-location.

There are estimated to be 25,045 individuals in Hudson Bay, and 28,008 in the Canadian Low Arctic. The population in the St. Lawrence estuary is estimated to be around 1000. The Beluga's natural predators are polar bears, who hunt when the whales become encircled by ice during winter. In these cases many miles of ice separate groups of Belugas from the open ocean, and as a result they are unable to leave until the ice melts in spring. During this period belugas do not offer much resistance to bear attacks due to their low energy reserves. 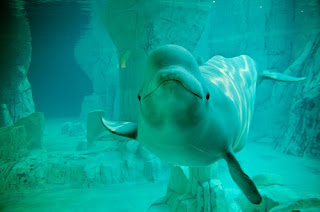 Because the Beluga congregate in river estuaries, human-caused pollution is proving to be a significant danger to their health. Incidents of cancer have been reported to be rising as a result of the St. Lawrence River pollution. The bodies of the Beluga inhabiting this area contain so many contaminants that their carcasses are treated as toxic waste.

This is food for thought for humans: if the whales contain this amount of toxicity from pollution, then humans carry equal amounts. We are killing the flora and fauna of the planet, including ourselves. It is time to take a stand for an alternative lifestyle before it is too late.

So interesting about the lack of their dorsal fin. I never realized that. both suggestions as to its evolution are good ones. Maybe both played a role. I really enjoy trying to figure out how evolution worked to create such anomalies.

love most critters... thx for this, barbara....

Wasn't there a children's song 'Baby beluga'?
If you have a moment, Barbara, please go to my blog and view a picture of the cow and moon plaque, and email me garyrith at yahoo dot com.
Thanks!

Another interesting post Barbara, thank-you. These creatures could not be further away from Australia if they tried! Now wonder I know very little about them. Not any more!

Charles, with respect to the lack of a dorsal fin, I considered it was because these whales like to swim underneath the arctic ice. A dorsal fin would hamper their movement, especially if it got caught on a sharp piece or something; or a polar bear could hook it's foreclaws into it.

Gary, the cow and the moon are really cute and I sent you an email.

Pam, now you have to post about some of the animals down under. I'm certain there are a few I've never seen either.

Good "food for thought." While it doesn't necessarily follow that humans will automatically carry equal amounts of the same pollutants, the point is well-made none-the-less. Interesting post!

Ruth, your comment has merit. I should have perhaps have added that humans use multiple products daily that contain chemical contaminants without a second thought.

Barbara, thanks for visiting David's Digital Art! We have Beluga whales at Chicago's Shedd Aquarium and they have been very successful in breeding them. Their lack if a dorsal fin gives them a sleek look that belies the fact that they are whales.

toxic waste, eh? so are the orange-peels in Germany...not permitted in compost apparently.
small wonder our poor world is busily trying to shake us off

Tumbleweed, welcome, your own blog is interesting in many aspects; and very refreshing to read your descriptions on life and work.