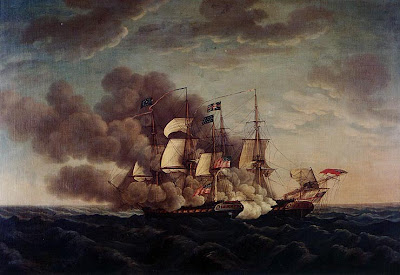 
When the United States declared war on Britain in 1812, the Royal Navy had eighty-five vessels in American waters. By contrast, the United States Navy, which was not yet twenty years old, was a frigate navy that had only twenty-two commissioned vessels.

The USS Constitution had been launched on September 20, 1797, and had done service in the Quasi War and the First Barbary War. By early 1812, relations with the United Kingdom had further deteriorated and the US Navy began preparing for war, which was declared June 20. 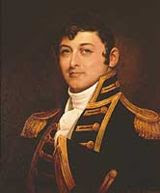 Captain Isaac Hull, who had been appointed Constitution’s commanding officer in 1810, put to sea July 12, without orders, to prevent being blockaded in port. His intention was to join the five ships of John Rodgers' squadron. 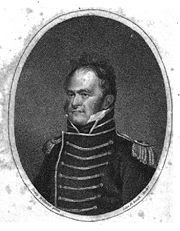 [John Rodger]
However, the Constitution was in Annapolis, and Hull was unaware that Rodgers had already set sail for New York. 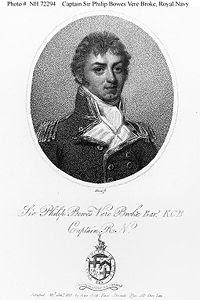 On August 2, the Constitution sailed from Boston up the coasts of Nova Scotia and Newfoundland. There she captured and sank two British merchantmen, and then went south towards Bermuda. She soon chased down the American privateer Decatur, and her captain told Hull that he had escaped a British frigate the day before.

The next day, August 19, a ship was sighted from the Constitution. With the wind on her side, the Constitution closed in on the ship, and soon discovered that she was HMS Guerriere. As the Constitution approached, the Captain on the Guerriere, James Richard Dacres, ordered broadside after broadside be fired at the approaching ship. They had little effect, and after one cannon-ball bounced off the side of the Constitution, a crew member is to have yelled "Hurrah, her sides are made of iron."

With the ships 25 yards apart, Hull ordered his crew to fire a broadside both of cannonball, and a canister of grape. The effect of this broadside over and over again proved devastating to the Guerriere. One of the broadsides knocked over her mizzenmast. The mizzenmast acted as a rudder, and had slowed the Guerriere. The Constitution went ahead, and attempted to cross her box, but the manuver was cut too close and the Guerrieres bowspirit became entangled in the rigging of the Constitution's mizzenmast.

Sensing that the shot in the opposite direction of the Constitution may be an attempt to signal surrender, Hull ordered a Lieutenant over to see if it was. When the Lieutenant walked onto the Guerriere, he asked if it was an attempt to signal surrender. Captain Dacres responded "Well, I don't know. Our mizzen mast is gone, our fore and main masts are gone--I think on the whole you might say we have struck our flag."

Captain Dacres was escorted onto the Constitution, and Hull refused to accept Dacres' sword of surrender, saying he could not accept the sword from someone who had defended his ship so gallantly. Hull ordered that Dacres' mother's bible be given to him, and brought the prisoners onto his ship. Hull found on the Guerriere that there were 10 impressed Americans aboard, but Dacres had permitted them to stay belowdecks instead of fighting their countrymen.

Hull had wanted the Guerriere towed in as a prize ship, but when he saw she was in too poor of condition he had ordered her blown up. Hull sailed back to Boston, and reported of his victory. After the battle, the USS Constitution was given the nickname Old Ironsides. 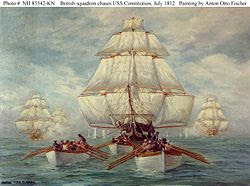 [The Constitution escapes the British Squadron]

Dacres was faced with the court of inquiry. His defense was that the Guerriere was originally built as a French frigate, until she was captured in 1806. He, therefore said, that she wasn't as sturdy as ships in the Royal Navy, and he was not charged. However, his request to command another frigate, was denied.

MY TOWN MONDAYS are the brain child of Travis Erwin. For other insights around the globe go to traviserwin.blogspot.com.
Posted by Barbara Martin at 22:32

Steve, thanks and to think I get seasick on large open bodies of water.

That was a very exciting rendering of the battle, Barbara. Dacres should have received another command.

Here in the US, our history classes tend to pass the War of 1812 off as a quick little win against those annoying British...

A fascinating post, Barbara. I remember touring the Constitution when I was in Boston years ago and it was very interesting to see. I've always been fascinated by the tall ships. Maybe I was a sailor in a past life. ;)

We both did Canadian history today. back to Detroit next week.

Where were you when I was taking history classes. Great informative post as usual.

Bernard, Dacres was fortunate not to have had charges laid against him and thrown into jail or executed. It was expected of him to fight to the death for his ship.

Gary, it wasn't a little win for the US. The 1812-1815 war ended when the Treaty of Ghent was signed. Because there were no specific stipulations written into the Treaty neither the Americans or the British gained any particular ground over the other. The majority of Canadians believe we won this war, at least for the year 1812, and are very proud of Isaac Brock saving Upper Canada. I will be covering this Treaty in a future post.

Those were the days of "gallant" battle.How stressful would all that be, and then face posssible charges of jail or execution pre valium or diazepam or whatever.Guess that's why rum was so popular with those on the high seas!!

Linda, you very well may have been a sailor in a past life, or you were the wife of a seafaring captain. When the Three Tall Ships came to Toronto it was a big moment for me.

Patti, yes, we could continue to write pairing historical posts. It would be fun.

Travis, I must have gotten this teaching ability from my mother, a teacher of grade school. She always advocated illustrations with text.

Reb, thank you. I expect there might be posts on Klondike Days, the Storyland Valley Zoo, and the Borden Zoo.

Arija, welcome. I hope you enjoyed your visit and return anytime.

NOTE: I had intended to continue with Isaac Brock - Part 3 until I realized I was leaving out interesting parts of the War of 1812. Such as this sea skirmish and how the American military morale was holding up.

Pam, you're not far off...rum was packed in small kegs and given at intervals on the ocean voyages to prevent mutiny. Sometimes the sailors were given an extra ration of food. Not all sea captains were fair, although one of the more famous captains comes to mind: Sir Francis Drake. Drake was known to be fair to his men and they, in turn, gave him good working service.

Thanks for another look into our shared history. It really is alive.I also remember touring the Constitution years ago. I loved it then, and love it when the tall ships come into Cleveland.

Blogger ate my comment again :-(
Thank you for another insight into our shared history, Barbara. I always
learn something new from you.

Debra and Tony, it must be my research material. I have two new sources with which to dig into for future Canadian history. I'm hoping for something oscure.

Barrie! Thank you. Hope you had a great time in TO. Too bad you couldn't stay for the CNE.