My Town Monday - Samuel B Steele - Twenty Miles For A Drink 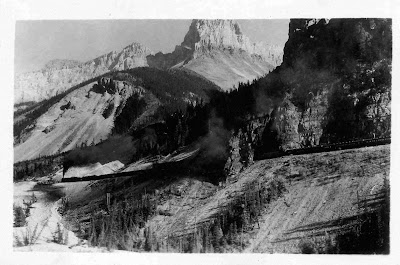 
By the end of 1883, the Canadian Pacific Railway had reached the Rocky Mountains, just eight km (5 miles) east of Kicking Horse Pass.

In April 1884, Samuel Steele of the NWMP was assigned to maintain the law during the construction of the Canadian Pacific Railway in British Columbia. Their jurisdiction was along the surveyed line of the railroad which consisted of an area 20 miles wide. This area was proclaimed on May 6, 1884 by the Parliament of the Dominion of Canada under the Preservation of Peace on Public Works Act. The Public Works Peace Preservation Act was amended on 2nd of June 1884 to the original ten miles on either side of the CPR railroad construction line to encompass one hundred and thirty miles.

In 1884 the sale of intoxicating liquor was prohibited. The only location where liquor could be sold was if there was a bar in a tent or cabin. Any person caught in the act of selling, were liable to a fine of $40.00 for the first and second offences; for the third they could be imprisoned. As the Public Works Peace Preservation Act covered a narrow strip of land, the CPR labourers (“navvies”) were able to leave that specified area at any time after they received their month’s wages to spend the entire amount if desired on a prolonged spree. This delayed the progress of the construction to the railroad line.

The Government of British Columbia determined they should not be deprived of internal revenue and issued licences to sell “spirituous and fermented liquors” within the land proclaimed under the Act. The NWMP were given the right to ensure that the building of the CPR would not be delayed. Steele enforced the laws to the limit, dealing with those under the influence in public places as to set an example to deter others. He recommended to the government to increase the width of the railroad belt to 40 miles and the NWMP’s powers to enable the magistrates to punish with imprisonment for the second offence of selling intoxicating liquor. The suggestions were approved and to good effect. The wholesale and retail stores on the edge of the 20 mile area had to move, and the “navvies” found the distance too long to walk for a drinking spree.


For other participants for My Town Monday go here.

When I prepared this post it came as a surprise that the Preservation of Peace on Public Works Act was the first one passed in Parliament for the Dominion of Canada in 1884. In the previous MTM post about the protests during the G20 Summit in Toronto I had been only aware of the Public Works Protection Act of 1939 with current amendments.
Posted by Barbara Martin at 23:30

This was a fascinating post, Barbara. I loved the way they managed to stop the sprees.

I grew up in a dry county. We had to drive 20 miles just to get beer. But we made the drive anyway.

I'll try once more - Blogger has been unkind to me: I must admit that I wouldn't have grudged them a drink from time to time given the hard nature of the work. And, I know, temperance is difficult. But so is life in general.

Teresa, Sam Steele was a man of the times complete with a biased attitude. The CPR labourers had to work under gruelling conditions which will be covered in a future post.

Charles, the NWMP stepped in to curtail this activity as it was hampering the construction of the transcontinental railroad. I would have thought that if they allowed a little leeway the workers would have responded in a more positive manner. Except in 1884 the class distinction was still in force. The working class didn't have much say in the matter. It was work or starve.

RuneE, Blogger has been wicked to me today as well.

The government had dried up the areas of alcohol due to recommendations from the NWMP. Most of Steele's recommendations were accepted and allowed the NWMP to enforce them. Apart from policing the wilderness they were magistrates too.

As for treating the labourers properly an upcoming post will demonstrate the horrid conditions they worked in combined with the low pay. The Chinese communities in Canada received an apology from the Canadian government on the treatment of Chinese workers during the building of the CPR line. I wonder if a monetary settlement was provided too as apologies are often associated with an admission of guilt.

Building a railway in the mountains is one of the most difficult jobs. I read about other railroads in the world that the mountain railways have to deal with extreme temperatures and that especially the tunnel digging caused a lot of problems.
Thanks for your visit, Barbara.

I love your blog. And the photos, wow. I live in the desert and find beauty and peace there.
Mary

Wil, the CPR line through Rogers Pass in British Columbia was built at a grade of over 4% when the recommended grade was 2.2%. Canadian Pacific had to build special hotel lodges at Mount Stephen in Yoho and Glacier National Park to accommodate travellers overnight as the pusher engines were unable to pull the heavy dining and sleeper cars up the "Big Hill" grade. Tunnels were dug in 1909 after numerous avalanches and train wrecks. This will be covered in the next post.

Mary, welcome, and enjoy your visit.

So interesting. Have you thought of posting some info on Wikipedia?

Fascinating info. Now I know who to ask when I need info on Canadian history!

Interesting, Barbara. Good to be back in the MTM saddle.