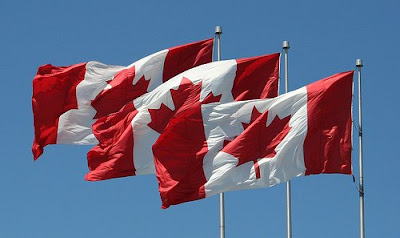 The origin of the name “Canada” comes from the expedition of French explorer Jacques Cartier during a trip up the St. Lawrence River in 1535. The Iroquois pointed out the route to the village of Stadacona, the future site of Quebec City, used the word “kanata”, the Huron-Iroquois word for village. Jacques Cartier used the word “Canada” to refer to both the settlement of Stadacona and the land surrounding it.

In 1841, the British Parliament united Upper and Lower Canada into a new colony, called the Province of Canada. A single legislature, consisting of an elected Legislative Assembly and an appointed Legislative Council, was created. The assembly's eighty-four members were equally divided between the former provinces of Upper and Lower Canada, though the latter had a higher population. The British government, through the royally-appointed Governors, still exercised considerable influence over Canadian affairs. This influence was reduced in 1848, when the province was granted responsible government.

From 1841 to 1844, Parliament met on what is now the site of Kingston General Hospital in Kingston, Ontario. In 1849, the Parliament Building in Montreal, which had been the home of the legislature since being transferred from Kingston in 1843, burnt down. In 1857, the legislature was moved to Ottawa, after several years of alternating between Toronto and Quebec City. 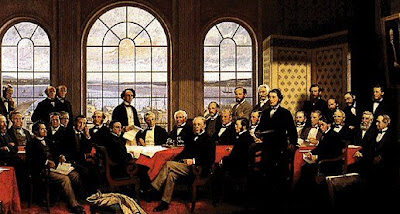 The modern-day Parliament of Canada, however, did not come into existence until 1867. In that year, the British Parliament passed the British North America Act 1867, uniting the Province of Canada (which was separated into Quebec and Ontario), Nova Scotia, and New Brunswick into a single federation, called the Dominion of Canada. The new Canadian Parliament consisted of the Queen (represented by the Governor General), the Senate and the House of Commons. An important influence was the American Civil War, which had just concluded, and had indicated to many Canadians the faults of the federal system as implemented in the United States. In part because of the Civil War, the American model, with relatively powerful states and a less powerful federal government, was rejected. The British North America Act limited the powers of the provinces, providing that all subjects not explicitly delegated to them remain within the authority of the federal Parliament. Yet it gave provinces unique powers in certain agreed-upon areas of funding, and that division still exists today.

In 1866, the colonies of British Columbia (formerly New Caledonia) and Vancouver Island were united. British Columbia had been important for British control of the Pacific Ocean, and was a centre of the fur trade between Britain, the United States, Russia, Spain, and China. It did not participate in the original Confederation conferences, but agreed to join Canada in 1871 when John A. Macdonald promised to build a transcontinental railroad across the continent through the Northwest Territories (formerly Rupert’s Land and the North-Western Territory), which at this time still extended to the U.S. border. The Canadian Pacific Railway and the Dominion Land Survey were begun soon after.

In 1873, Prince Edward Island, the Maritime colony that had opted not to join Confederation in 1867, was admitted into the country.

In 1898, the boundaries were changed in the Districts of Mackenzie, Keewatin, Ungava, Franklin and earlier in 1897 for Yukon. The District of Yukon became a Territory separate from the North-West Territories in 1898, while Quebec boundaries are extended north.

In 1949, at its own request, after a plebiscite, Newfoundland enters the Confederation as the tenth province of the Dominion of Canada. 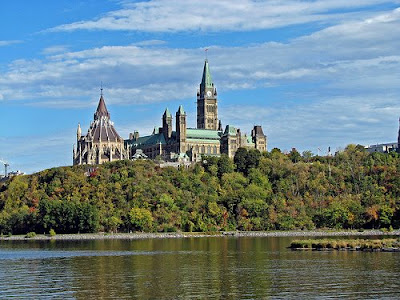 [3-Parliament Buildings, Ottawa, as seen from across the Ottawa River at Gatineau, Quebec]

Parliament Hill is a scenic location on the southern banks of the Ottawa River in downtown Ottawa, Ontario. Its Gothic revival suite of buildings – the Parliament Buildings – serves as the home of the Parliament of Canada; the best known of these buildings is the Centre Block, with its prominent Peace Tower, a national symbol. Parliament Hill attracts approximately 3 million visitors each year.

The entire parliamentary precinct measures 112,360 square metres (1,209,433 sq ft.), bounded on the north by the Ottawa River, on the east by the Rideau Canal, on the south by Wellington Street, and on the west by a service road near the Supreme Court.

The main buildings are: the Centre Block, built between 1865 and 1927, containing the House of Commons and Senate chambers, and featuring the Peace Tower and Library of Parliament; the East Block, built in two stages in 1867 and 1910, containing senators' offices and preserved Confederation-era rooms; and the West Block, built in 1865, containing ministers' and MPs' offices and meeting rooms. The three blocks are disposed around a large grassy quadrangle, while the Centre Block is surrounded by lawns and a walk overlooking the Ottawa River. The Library of Parliament was opened in 1876. The Legislature of the Province of Canadsa met for the first time in the new building on June 8, 1866, and the new Parliament of the Dominion of Canada began its first session there on November 6, 1867.

The overall site is in a combination of the High Victorian Gothic, English garden, formal garden styles popular at the end of the 19th century. The Palace of Westminster and precinct had recently been rebuilt in a similar style, and the choice of a gothic rather than an American inspired neoclassical design, was a symbol of Canada's continued links to Britain.

Thanks so much for the reminder/history lesson. Happy Canada Day.

I never knew this history, in particular Canada's name origin.

And what a beautiful shot for the majestic Parliament Buildings in Ottawa.

This was a really interesting post, Barbara. I learned a lot.

During the eight years I lived in Canada, nothing was more interesting to me than Canadian history. It gave me great pleasure to read this post, Barbara.

Happy belated Canada Day. I hope you're getting out & enjoying the Summer!

Its an amazing shot of the National Flag. Looks awesome.