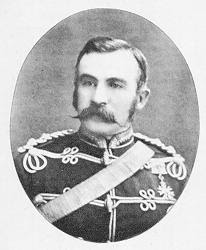 When Colonel George Arthur French’s party had parted from the one Samuel Steele was in at La Roche Percee on July 29th, they had gone “via Wood End depot, across Long River and Dirt Hill to Old Wives’ Lakes to Old Wives’ Creek…Cypress Hills,” where they halted the last week of August waiting for supplies from Lt.-Col. James Macleod. Macleod had been forced to keep strict observation of his native guides as they appeared unreliable. It turned out the Cree guides Macleod had been using were reluctant to investigate the country populated by the Sioux and Blackfoot as their top-knots were in popular demand. 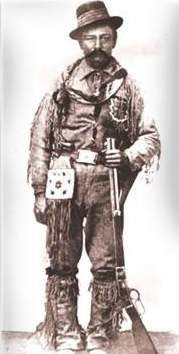 [2-Jerry Potts] Colonel French engaged the services of Jerry Potts, a half-Scotch, half-Peigan scout and interpreter, and made arrangements for horses and supplies for the members of the force established in the south-western area.

Jerry Potts, a short, bow-legged man, with piercing black eyes and long straight nose, accompanied the party with Lt.-Col. Macleod as they set out westward for the post on Old Man’s River. He was quiet and laconic, and known to be a fighter with a reputation. He gained the confidence of everyone the first day out as he rode out ahead, and when the party reached the Milk River they found him near a buffalo cow that he had killed and dressed. The second day he showed the force water springs with good water.

During the night there had been mysterious rumblings, explained in the morning by the sight of a dark mass of thousands of bison moving eastward, crowding down into the coulee to the springs. On Jerry Potts’ advice, orders were made not to fire any shots in case the sound caused the herd to stampede.

Plains bison
For those unable to watch embedded see here.

When they resumed their march, the wagon train and guns were kept to one yard distance, the men walking alongside the train while making their way through the immense herd of 60,000 to 70,000 animals. 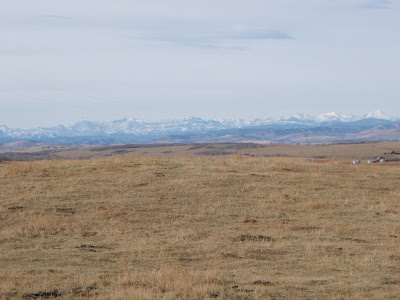 The Rocky Mountains had been in full view for several days. 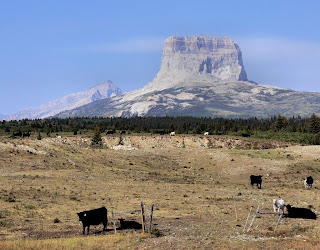 [4- Chief Mountain -click to enlarge] Chief Mountain (rock face is 2,000 feet in height located on the eastern border of Glacier National Park in Montana and the Blackfoot Indian Reservation) could be seen with its huge square block rising through the clouds. Potts explained to them about the natives and conditions of this part of the country. The natives who came to the trading posts to trade were often paid with ‘whisky’ or ‘fire-water’ and soon maddened by the drink, settling their old scores and family feuds by shooting or butchering one another in their camps or other places where they obtained their intoxicants.

During their first month established on the Old Man’s River, Chief Three Bulls with the Blackfoot informed Macleod that a coloured man named Bond, had a trading post at Pine Coulee, fifty miles north, and had given him a couple of gallons of whisky for two of his horses. [5- LNF Crozier] Potts arranged to meet with Three Bulls the next evening about dark on the trail to Pine Coulee. Inspector Crozier and a small party of well-mounted men, guided by Potts, had instructions to seize all robes and furs which they suspected had been traded for whisky, and any other goods and chattels to satisfy fines.

Crozier returned two days later with Bond and four others in custody, whom had been captured about 45 miles away. Their wagons had been loaded with alcohol, 116 buffalo robes, and each carried a Winchester Henry magazine rifle and a Colt revolver. Macleod confiscated the robes, destroyed the alcohol and fined the two principals and Bond, who was their guide and interpreter, $200 each, plus the two hired men, $50 each. The following day, a well off trader from Fort Benton came to Macleod to pay all the fines except for that of Bond.

As the force was in need of bedding, the confiscated buffalo robes and furs were issued for this purpose. The hides of younger animals were made into coats and caps, one being issued to each member of the police.

My Town Mondays were started by Travis Erwin in Amarillo, Texas who has handed the reins over to Clair Dickson. For other participants please visit the new location here.
Posted by Barbara Martin at 01:12

Most interesting. Chief Mountain is one of my favourite sights.

Fascinating post, Barbara. I loved the embedded bison videos and the idea that the Mounties got their blankets by confiscating buffalo robes and hides in lieu of fines.

Wouldn't it have been amazing to see those big heards back in the day.

Leah, I have been down to Waterton on highway 3 into Montana where the mountains seem to just materialize out of the ground.

Teresa, the NWMP were formed specifically to tame the west before the settlers arrived.

Charles, my thoughts exactly when I added the videos to lend an idea of how it might have been except for the sheer numbers.

Great videos of the bison! What an impressive animal! I can see that they were the food and clothing of the indigenous people of America. Thanks Barbara.

Kia ora Barbara,
You have a way of bringing history to life with your words, photos, and videos. There is a lot of colour and also sadness in these historical reviews. The characters like Potts who roamed the land, the great herds wiped out and at the same time wiping out a culture and way of life predicated on there being. And all in this stunning land did it unfold.
Cheers Barbara, I have been a bit silent as of late, but still here enjoying your special place.
Aroha,
Robb

The videos of the Bison are amazing Barbara. They seem to be the new dimension to your My Town posts.

Wil, sad to think the American government felt they had to eradicate the aboriginals food source in order to starve them into submission.

Robb, all things in nature have a way of correcting itself. Come when you can. Your hiking adventure is fast approaching. May you have good weather, good times and good eats.

Thomas, they were the best venue to show the majesty of the bison while providing the concerted efforts people have done to restore the numbers of these magnificent animals.

I have had the great fortune to take part in a bison roundup on a large ranch. Sure I was on a 4-wheeler and not a horse but I still felt quite like a true westerner.

I absolutely love this stuff. I included some of it my novels for exactly that reason. I have Jerry Potts in 'Partners' along with some other historical mention. The same is true with 'The Great Liquor War' and 'Homesteader'.
I did this because no one was reading Canadian history so I put it in some entertainment.
It's great to see someone putting it our there for all.
Dave
www.dmmcgowan.blogspot.com

Travis, many ranches have modernized their cattle roundups, and you were probably safer in a 4-wheel than on horseback with herding bison. Some forget they are wild.

Dave, welcome and thanks for stopping by. My blog has quite a bit of Canadian history on it, including the early west. I'll be over in a bit for a visit.