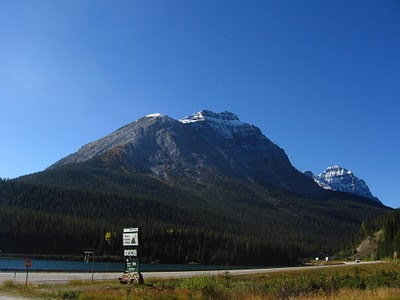 
When the Canadian Pacific Railway continued construction on its transcontinental railroad in 1885 the Big Hill was the most difficult portion of the route. It was located in the Canadian Rockies west of the Continental Divide and Kicking Horse Pass. 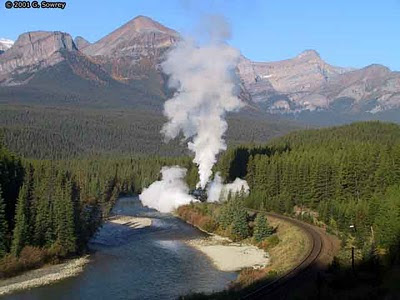 
The rail line route along the Kicking Horse River was considered the worst. From the west end of Wapta Lake the original survey revealed a uniform grade of 2.2% (116 feet to the mile) to Ottertail required a 1,400 foot tunnel through Mount Stephen and exposure to avalanche paths. The CPR realized that digging this tunnel would delay things for a year. This resulted in a temporary alternate route being built instead. The new route descended at 232 feet per mile or 4.5%, more than double, passing Wapta Lake to the base of Mount Stephen, along the Kicking Horse to a point just west of Field, then climbing again the meet the original survey at Muskeg Summit. 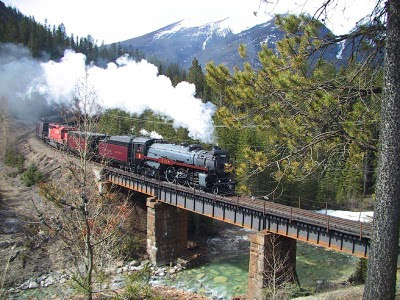 Three special reverse grade dead end spurs to control runaway trains were built. Runaways and deaths did occur despite the safety precautions. The Big Hill between Field and Hector that ran for eight miles was ‘temporary’ for almost 25 years. It took four engines to get 710 tons up the grade. Trains were limited to a certain number of cars; freights were allowed more and passenger trains less. The route was dangerous and very expensive to operate. The remains of one accident can be found near the Kicking Horse River campground.

Trains loaded with heavy dining cars and sleeping cars were unable to climb the Big Hill, resulted in the CPR building rest stops at Mount Stephen House and Glacier House. 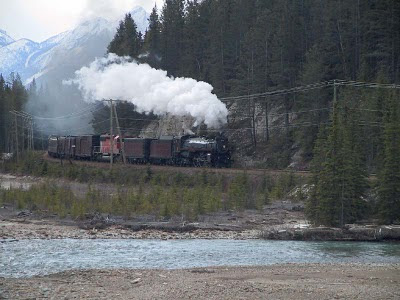 
Special locomotives had to be built to haul the trains up the Big Hill. Heavy 2-8-0’s were enormous for their day, the first Consolidation type equipped with water brakes. Hundreds more would follow, larger and stronger, and were stationed at Field where a train stonehouse with turntable had been built for their storage and maintenance. Field had originally been known as the Third Siding until December 1884 when the CPR named it after C.W. Field, a Chicago businessman, whom they hoped would invest in their railroad. 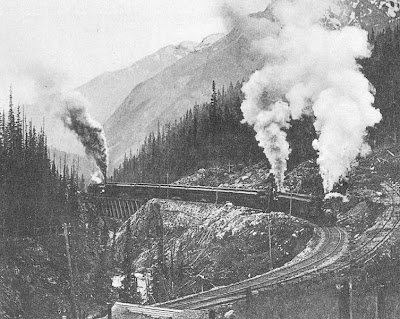 Big Hill” on the CPR, 1890. Safety Switch No. 1 and its uphill spur are shown foreground and right; the truss bridge under the rear of the train, now known as the "Old Bridge", survives as a tourist attraction.

In 1909 the Big Hill was replaced by an engineering marvel, the Spiral Tunnels, reducing the grade to 2.2%, the norm for railroad tracks for maximum grade, at a cost of $1.5 million. 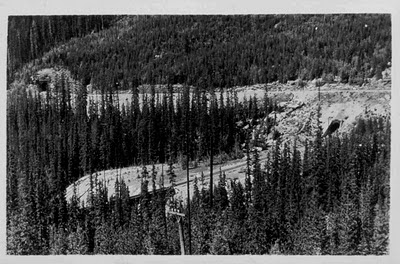 The tunnel under Cathedral mountain is 3255 feet long with a turn of 291 degrees, and the one under Mount Ogden turns through 217 degrees over 2992 feet. When the tunnels were bored, the measurements were off on one tunnel 1.5 feet when the two ends connected, and on the other tunnel, six inches. 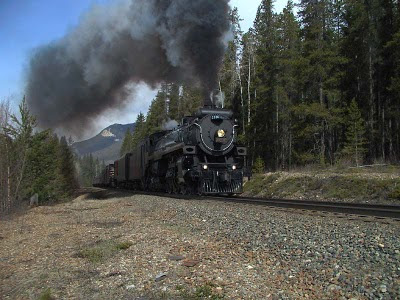 A bit of trivia about Mount Ogden: it was once the venue for a piano concert. A railway employee had been transferred and decided to move his small piano by loading it aboard a small push car. As he coasted through the lower tunnel he played his piano, much to the surprise of another railway employee who was patrolling the tunnel, watching for rockfall. 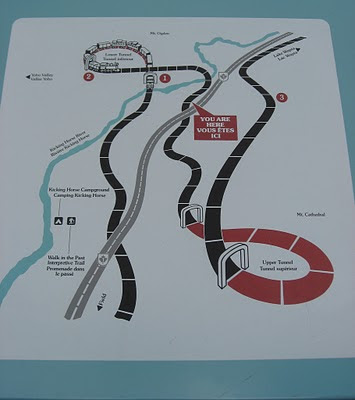 
There is a lookout just off the Trans-Canada Highway from which visitors can observe both portals of the tunnel. Passengers can ride this route, at least in the summer, on Great Canadian Railtours' "Rocky Mountaineer" train from Calgary to Vancouver.

Wow- intriguing stuff about the real nuts and bolts behind luxurious train travel!

I wish I knew a tenth as much about my country as you do yours! And looking at the photos makes me itch to do a murder myster train novel. Too little time, so much to write.

Clare, this is a fascinating trip to make via train, although the early days were fraught with danger of avalanches and collapsing bridges. I did this trip by train when CP still ran a regular service from Calgary to Vancouver, and returned to Edmonton via the Yellowhead Pass on CN. The Spiral Tunnels are neat because when you're sitting in the train you can't feel the curve in the track or that the train is turning. Though on those trips I had a roomette with sleeping quarters and slept on the train.

The Rocky Mountaineer trips have overnight accommodation in hotels, so the trains aren't pulling sleeping cars with berths or cabins. CN's trips through the Rockies via Jasper have sleeping cars available for those who want them.

I love trains. This sounds like a fabulous trip.

Rick, I know more about western Canada than the east, which is probably why it seems I know a lot. My late mother was a teacher so I was inundated with information while growing up. Though I do have to state that every summer our family made long vacations throughout the western national parks and into Vancouver and Vancouver Island up until I was in high school. Some years we swung down into Idaho and Montana to go through Glacier National Park along the Going to the Sun highway. We camped those trips because my mother had camped on similar trips to the mountains with her family. My grandfather had a contract with CP at the turn of the last century to put in bridges in the national parks in Banff, Jasper, Yoho and Kootenay. He would arrange the family to come to Banff for the whole of August because he was allergic to ragweed and wouldn't return to the ranch until early September. And that's probably enough material for a separate post at a later time.

Thanks for the credit, Barbara! It's a great article, even without the pictures. ;)

This is such an interesting post, Barbara. The tunnels look amazing, and I love the old pictures of the trains as well as the usual magnificent scenery shots.

Man, I just love steam trains. Something very old west about them for sure. something adventurous.

My father-in-law would have loved this post. A lecturer in Civil Engineering at University when he was alive, he took the family overseas to work and study, eventually living in England for a year when my husband was little.They were taken to every bridge and tunnel imaginable in that time.His enthusiam never waned, but can't say the same for my mother-in-law. Great pictures Barbara.

The trains opened up the west - how quickly we forget what the world was like before air travel. I've taken the train a few times from Winnipeg to Terrace, BC (via Jasper). Awesome trip. Long - but awesome.

p.s. The Countess of Dufferin sits in Assiniboine Park. I was going to research and do a future post on the locomotive.

A fascinating post. I still marvel at all the work done to open up the west.

I just love steam train pics. they make me think always of the west, and of a simpler time. Just lovely. I would love to ride one sometime.

Carumba! To travel the rail line through there would be incredible.

In 1970, I took the train from Vancouver to Toronto and well remember the passage through the Rockies. I recall marvelling at the work and dedication it took to build a rail line through that beautiful, rugged country.

It was hardly luxurious for me, though. I was travelling on a $22 coach ticket and had to sit upright for 3 days and nights. Wouldn't have traded the experience for the world, though.

Thanks for kick-starting the memories.

Trish and Rob, then come back next Monday for more trains and the next bit of Sam Steele history.

Geoff, I'm glad I did the search for locomotives on Flickr and there was CP2816 chugging up the hill to the spiral tunnels. Took my breath away.

A history post without photos is dry, dull stuff. They help readers to assimilate the information so it stays in the memory.

Teresa, railroads were an important part of opening up the Canadian west, as it was in the United States and other countries.

Charles, then you ought to read Geoff's account of how he took the photos and the restoration history behind CP Empress 2816. It's very interesting.

Pam, I feel that way about steam locomotives, but not the diesel trains. When I was a very little girl CP still ran some of the old locomotives through Edmonton, and I got the excitement from my three older brothers who were very keen about them.

Gabriele, go ahead and do the post about the Countess of Dufferin. I, for one, would be interested about her history and where she made her 'runs'. Each of the locomotives that belonged to CP and CN have many interesting stories.

Leah, my next post deals with the railroad labourers and their working conditons.

David, you should plan a vacation then, and perhaps stop frequently to spend a night at each location to get a feel of the area. Think, it could be research for one of your western stories or novel.

Frank, I have gone coach several times with CN Via Rail for long trips, though the one I mention in the comments above was paid for by my Mother.

In your trip east, there were two possibilities: via CP through Glacier and the Kicking Horse Pass or CN through Jasper and the Yellowhead Pass. With respect to the latter trip, the wilderness near Valemont feels particularly remote. Its rumoured that there are sasquatches living in the area.

I think I need to ride that railroad...

Our local Tranzalpine is mighty beautiful, but that looks positively breathtaking!

Building railroads was a great achievement and still is in these mountainous regions.In a couple of weeks I shall post an entry about a railway in Norway that took 20 years to be built through the mountains near Bergen.
Thanks for this informative post, Barbara!

I would love to make my way across Canada by rail. Is there anything nicer than train travel.