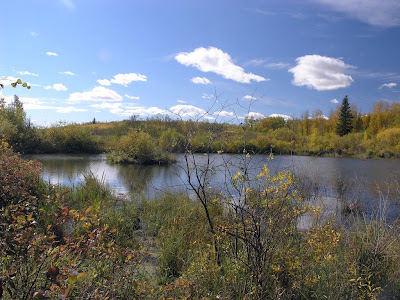 In July 1874, Samuel Steele began his trip west in service with the North West Mounted Police with the rank of sergeant-major from Fort Garry, Manitoba. The cavalcade that left Manitoba had assorted wagons, Red River carts, oxen, cattle, farming equipment, provisions and horses.

During the NWMP's stay at Fort Victoria, arrangements were made to leave the cows, calves and weak oxen for the winter months with a contract of $15 a head for the oxen and cows, and $10 each for the calves.

Once they left the Victoria Settlement, their progress to Edmonton was slow over difficult terrain and their horses had to be helped along whenever they fell. The problem with the horses pulling the wagons was that they were overloaded, there was insufficient grain to feed the horses and they were not acclimatized to the weather or area. 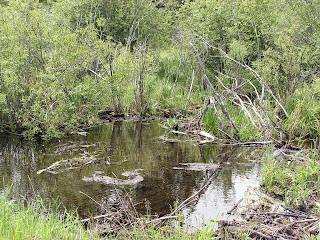 [2-Swampy marsh, typical of the parklands - click to enlarge]


When a messenger arrived with instructions to bring the division into Fort Edmonton that same day, a distance of twelve miles, they were unable to comply as some of the horses could not go on. Two men were left to pitch a tent where the horses could be sheltered from the elements, while Steele and the other horse teams continued on.

The trail was the worst they had encountered: “knee-deep in black mud, sloughs crossed it every few hundred yards, and the waggons had to be unloaded and dragged through them by hand….The poor animals, crazed with thirst and feverish because of their privations, would rush to the ponds to drink, often falling and having to be dragged out with ropes from where they fell. One of the men would hold up their heads while I placed the hitch. It mattered not how often they were watered, the same performance had to be gone through time after time.”[1]

Determined to carry out his orders, Steele and the men kept going even during the night with some wagons veering off the road into extensive marshes only to have to return. At 5:00 a.m. the next morning, they reached Rat Creek (just south of where Norwood Public School is at 9520-111 Avenue, Edmonton, the rat in the name refers to muskrats)[2], a small stream about four miles from Fort Edmonton. Steele informed the oxen driver, Gagnon, that the men and horses would not be able to go on as they were exhausted from being on the move for the last 21 hours. Steele set up camp while Gagnon proceeded on to Fort Edmonton.

Later that day they continued, and once they reached the first dry piece of trail were able to reach the fort (at that time located where the Alberta Legislature is now).

Fort Edmonton , also known as Edmonton House, was one of the many Hudson Bay Company’s trading posts and located at the end of the Carlton Trail. In 1915 it was dismantled after the new Alberta Legislative Building was erected. 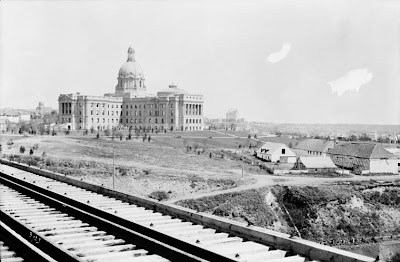 [3- Alberta Legislature and Fort Edmonton in 1914. The train tracks are on top of the High Level Bridge crossing the North Saskatchewan River]


In 1969 a reconstruction of Fort Edmonton was begun five km upstream from its original location and Fort Edmonton Park was born. 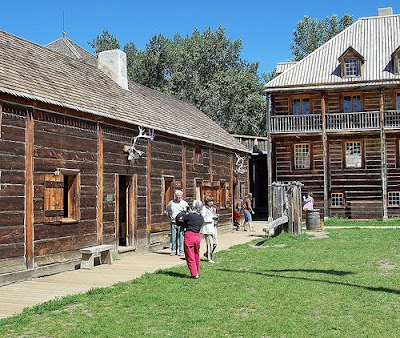 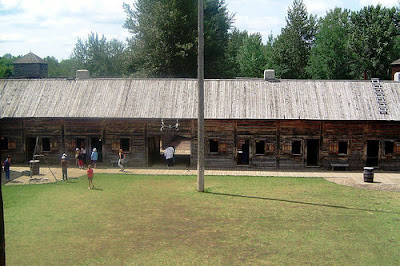 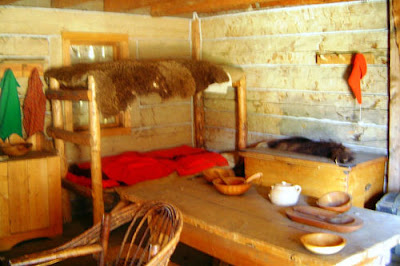 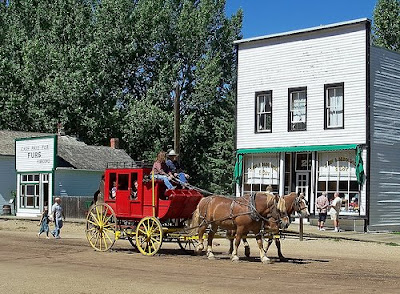 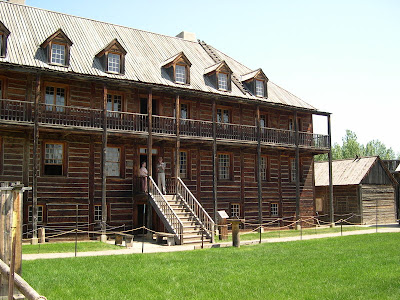 [8- Rowand House was a three storey house built by John Rowand, administrator for the Hudson’s Bay Company, for the sole use of himself and his family] 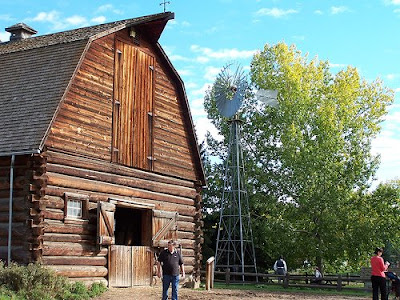 [9- Note this barn has fitted log corners, quite the engineering feat]

My Town Mondays were founded by Travis Erwin in Amarillo, Texas who has handed the reins over to Clair Dickson. For other participants please visit the new location here.
Posted by Barbara Martin at 14:36

What an exciting bit of history, Barbara. I felt sorry for the poor horses. I really enjoyed all the pictures of the great old buildings. Thanks for sharing!

As always, delightful narrative and pics. You have a talent.

Frank, the mud reminded me of a rural property I lived on years ago in Alberta that I had three truck loads of gravel put onto a driveway where the ground ate them. Finally, I gave up leaving a grassy track to drive on when the rains came in the fall.

Teresa, Colonel Macleod, head of the first NWMP, stated in a letter to his wife, Mary, about how much weight the horses were pulling when they left Fort Garry.

Patti, thank you for your kind words.

Charles, my first visits to Fort Edmonton Park were when Rowand House and a few other buildings had been completed.

I see it wasn't easy to build Canada. Personally I was interested in the last picture of the log barn where a variation of very common, old Scandinavian technique called lafting has been used. Here is a link to a page in Wikipedia that at least partly deals with it.

hi barbara - a really gripping story that underscores the tremendous hardships and privations endured (and perhaps accepted as more commonplace than we might care to think) by the people who established the west. i lok forward to reading the other elements of this series. have a peaceful day. steven

That is quite a house especially for it's day.

Fascinating saga. Thanks for this.

RuneE, thanks very much for the link. All of the new settlers to Canada had trouble with the biting insects during the summer.

L.A., that's because Rowand wanted to make sure the other inhabitants were well aware of his status in the community.

Steven, the hardships were there but the people prevailed.

Travis, I've been up those steps and inside. Very nice and roomy. You wouldn't have to duck coming in the door.

Leah, you're quite welcome. More saga next week, and a bit more exciting.

Such a tough life... I would never have survived.

Yet another post giving a 360 degree perspective of this town. Beautiful image choices as always...Thomas

Barrie, you would have been fine when raised in such circumstances. Actually you would still be fine if the modern conveniences were eradicted and you had to adjust to this type of lifestyle.

My grandmother left England in 1904 where she was accustomed to conveniences to live on the Alberta prairie on a homestead without running water.

Barbara,
I am always in awe when I read what out forefathers went through and what became of their endeavours!
How so very heartwarming that Fort Edmonton has been reconstructed. It is always so comforting to know that the human spirit values past achievements highy enough to preserve and rebuild some tangible memories for the future.

Your bench picture is very beautiful too, not to mention the images of the falls!

Your grandmother, a pioneer! Good on her.
That barn--like the toy Lincoln Logs we used to play with!

Merisi, the vast land of Canada was an inspiration for many Europeans who came to make a new life.

Dina, yes, she was a pioneer. Her husband, had been provided a 'stake' from a friend in Orillia, Ontario to go west. His grandfather had arrived with the British military in 1826, and upon his service ending was allotted a piece of land according to the custom then.