On September 3, 1879 the first Toronto Industrial Exhibition opened for three weeks on what is now known as the Exhibition Grounds. Its mandate was to foster the development of agriculture, industry and the arts. The first Industrial Exhibition replaced the earlier provincial fairs. General admission was 25 cents and over 100,000 people attended. The Crystal Palace was its main building, but by 1894 more buildings had been erected. 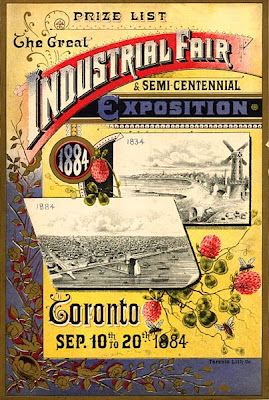 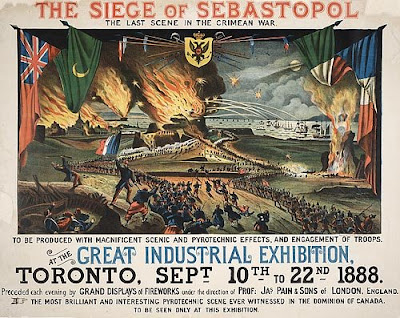 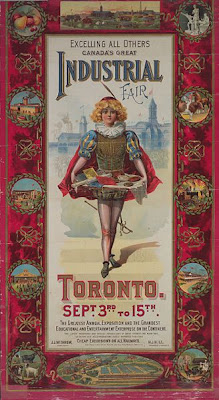 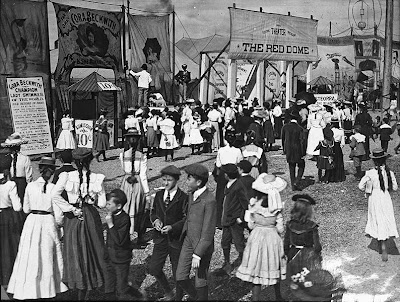 The Toronto Industrial Exhibition later became the Canadian National Exhibition in 1904. None of the original 19th century buildings have survived, but the oldest existing exhibition buildings are about 100 years old, which comprise a national historic site, including the Press Building (1905), the oldest among them. 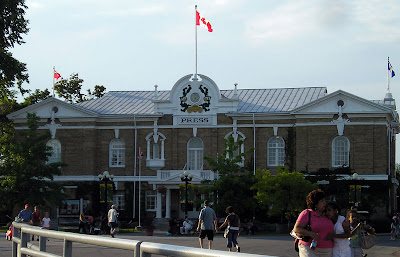 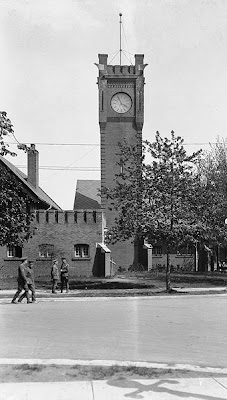 This building today is manned by the Toronto Police Service. 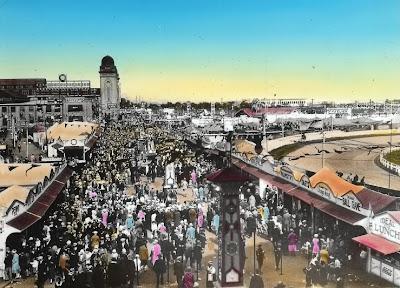 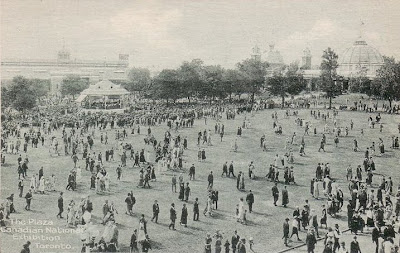 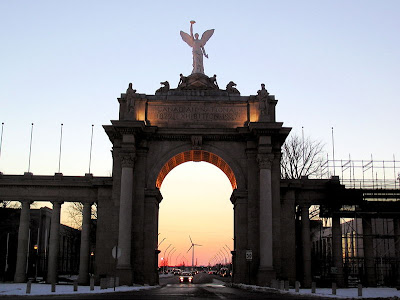 In 1927, the Princes’ Gates were officially opened by Edward, Prince of Wales (later King Edward VIII), and Prince George (later The Duke of Kent), on August 31st during that year’s CNE. The Gates were built to celebrate Canada’s 60th anniversary of Confederation. First to pass through the gate was a Veterans Parade, a tradition that later became the annual Warriors’ Day Parade. 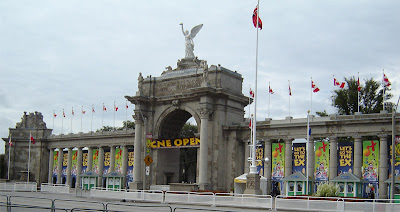 
The Princes’ Gates are made of a mix of stone and concrete. The statute at the top of the arch is the “Goddess of Winged Victory,” an interpretation of the original Winged Victory of Samothrace, designed by architect Alfred Chapman of Chapman & Oxley, and carved by Charles McKechnie in Beaux-Art style. In her hand she holds a single maple leaf. There are nine pillars to either side of the main arch, representing the nine Canadian provinces in existence at the time of construction. Flanking the central arch are various figures representing progress, industry, agriculture, arts and science.

In 1987 the gates became listed under the Ontario Heritage Act. 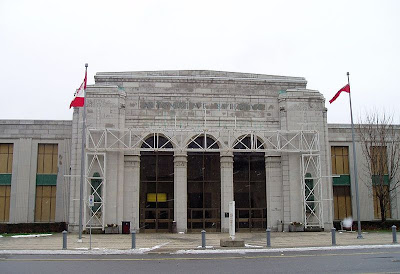 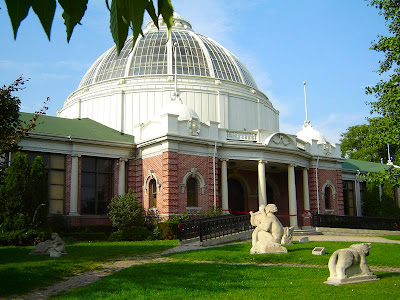 The CNE was not held between 1942 and 1946, when the land and its facilities were turned over to the Department of National Defence as a training ground. After World War II, it was used as a demobilization centre.

To date the CNE has always featured exhibits on the latest technological advances in industry and agriculture. 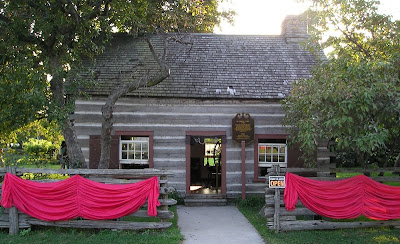 Other buildings on the exhibition grounds include the Scadding Cabin, a small building, located adjacent to the Fort Rouillé Monument and in the shadow of the wind turbine, can be found on the western grounds of the CNE. It is not only the oldest building on the grounds, but the oldest building in Toronto. It was built by the Queen’s York Rangers in 1794 on behalf of John Scadding, who served as clerk (essentially, an executive assistant) to the first Lieutenant-Governor of Upper Canada, John Graves Simcoe.

It is a squat, two-storey log cabin with low ceilings, designed to retain the heat from the fire in winter close to its occupants. It is said that John Graves Simcoe, who was over 6 ft (1.8 m) tall, had to stoop in order to enter the building.

Scadding was given a plot of land from what is now just north of Gerrard Street East, south to the waterfront. The cabin was built close to the Don River's east side, on what is now part of the Don Valley Parkway, just south of Queen Street East.

Scadding sold the property in 1818 to William Smith. In 1879, his son William Smith offered the cabin to the York Pioneers, a local historical society. Around this time someone mistook the information concerning the original owner for the cabin, leading to it being erroneously called "The Governor Simcoe cabin". The original cabin was disassembled from its original site and rebuilt by the York Pioneers, along with an adjacent cabin made out of new logs, on the current site, just in time for the original Toronto Industrial Exhibition in 1879.

John Scadding's youngest son, Henry Scadding wrote an early history of York/Toronto and set the record straight on who the original owner of the cabin was. When he died in 1901, the York Pioneers renamed it "The Scadding Cabin", in honour of this son of the original owner, who had also been a past president of their society.

The building as it now stands is little changed from its original construction. Apparently an additional 7 ft (2.1 m) extension that would have appeared to the south of the building was not moved. The second cabin constructed next to it by the York Pioneers was built using wood that was too green, and it was demolished a few years after construction. Over the years some of the timbers have been replaced, and the cabin was remounted on a stone foundation in the late part of the 20th century. Inside the cabin are furnishings appropriate to a house in Upper Canada in the 1830s, and some known to have belonged to Simcoe. 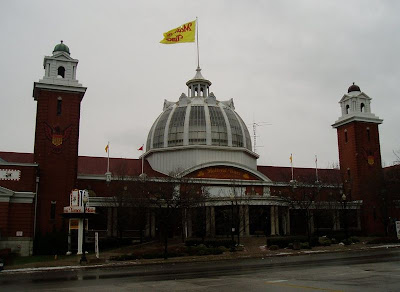 The Medieval Times Building on the exhibition grounds was formerly known as Government Building and later as Arts, Crafts and Hobbies Building. It was built in 1912 by architect G. W. Gouinlock, in a similar style to the Horticulture Building.

The Horse Palace (1931) is used to host the annual Royal Agricultural Winter Fair. When built the Art Deco building was considered the best equestrian facility in Canada.

Travis Erwin from Amarillo, Texas is the founder of My Town Monday. For other locations to visit please go to Travis' site here.
Posted by Barbara Martin at 00:26

So interesting to see the changes over the years in the photography and fashion. Our own showground exhibition buildings from the war years are being demolished - they are not longer safe and too expensive to fix -we are heading now into big, bright and shiny mainly for our car, caravan and camping shows, and Year 12 and university examination areas.I liked the small cottage.

Thank you, Barbara,
for another very interesting history lesson!

I have been there, but not during the exhibition! Its a huge and beautiful place. My friend ben who lives on Spadina was telling me that in the 70s when the Blue Jays were first playing they would play games there, and there would be all kinds of snow and wind and horrible weather.....like today.

This is really interesting, Barbara. I love the old pictures and posters!!

Those posters are magnificent! What detail and artistry.

We seem to be moving farther and farther away from our industrial past.

Yes, very interesting to see the changes over the years. I love those old posters.

I love the old posters, always loads going on on them!!

Amarillo has a place called the Crystal Palace as well only ours is a strip club. I guess it is for exhibitions as well.

I've often wondered what these kinds of exhibits accomplish. I enjoy them, but I wonder what the goal is. Or is there a goal beyond entertainment.

I could decorate my house with old fair posters. Love 'em and the changing times they show.

I agree, very interesting and great to see all those old pictures.

I remember visiting "The Ex" in the good old days with my dear parents. The smells, the sounds, the great old buildings.

Pam, every year there are exhibits on agriculture and technology advances. This is something that has carried forward from the first Industrial Fair.

Merisi, our past is our future.

Gary, there are scads of crowds every year, if you like midways, rides, variety in ethnic cuisine, agricultural exhibits, heavy horse demonstrations, etc.

Teresa, it's a nice reminder of the past of how things were.

Raph, the posters about the wars of the time provide the deepest messages.

Patti, I disagree as I believe we are experiencing a new type of industrial history.

Linda, the posters are affecting everyone, including me. The messages are clear.

Clair, future posts of this theme are planned.

Lyzzydee, it seems there is something for everyone within the posters.

Travis, at these fairs and exhibitions there are always some kind of sideshow.

Charles, many were originally to teach people about the new technological advances being made, as well as to provide an insight into far off cultures.

David, your fascination for the old is the same as mine.

David T, welcome and thanks for stopping by.

Jenn, yes, it brings memories to me as well, though my first fairs were in Alberta.

Thanks for a wonderful post with another great history lesson.

I enjoyed the old pictures and posters a great deal. Thank you.

Terrie, historical items are available by the hundreds in eastern Canada as Europeans have been here over 400 years. Western Canada has a younger history.

Bernard, you're quite welcome.