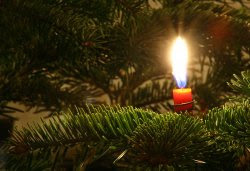 Yule was a midwinter festival celebrated by the Germanic peoples, which was progressively absorbed into the Christian observations surrounding Christmas. It was described as celebrated "for a fertile and peaceful season" and had a fertility sacrifice for the god Odin. Odin was associated with Yule, and that the tradition of the Wild Hunt undoubtedly contributed to the association of the two.


The Wild Hunt was a folk myth prevalent in former times across Northern, Western and Central Europe. The fundamental premise in all instances is the same: a phantasmal group of huntsmen with the accoutrements of hunting, horses, hounds, etc., in mad pursuit across the skies or along the ground, or just above it. 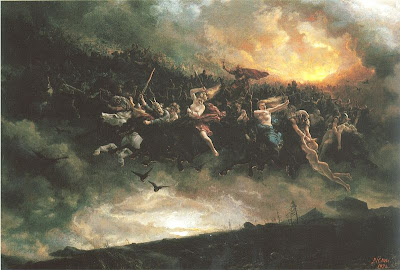 The hunters may be the dead, or the fairies (often in folklore connected with the dead). The hunter may be an unidentified lost soul, a deity or spirit of either gender, or may be a historical or legendary figure like Dietrich of Berne, the Danish king Valdemar Atterdag, Woden (or other reflexes of the same god, such as Alemannic Wuodan in Wuotis Heer of Central Switzerland, Swabia etc.), or Arawn.

The Germanic Yule feast still had a function in the cult of the dead and in the veneration of the ancestors, a function which the mid-winter sacrifice certainly held for the West European Stone and Bronze Ages." The traditions of the Yule log, Yule goat, Yule boar, Yule singing, and others stem from Yule customs, and these customs "indicate the significance of the feast in pre-Christian times." 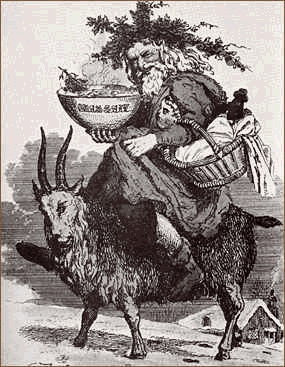 In Finland, on the eve of Joulu, children are visited by Joulupukki, a character similar to Santa Claus. The word Joulupukki means "Yule Goat" and probably derives from an old Finnish tradition where people called nuuttipukkis dressed in goat hides circulated in homes after Joulu, eating leftover food. Joulupukki visits people's homes and rides a sleigh pulled by a number of reindeer. He knocks on the front door during Jouluaatto, rather than sneaking in through the chimney at night. When he comes in, his first words are usually "Onkos täällä kilttejä lapsia?", "Are there (any) good (well-behaved) children here?" Presents are given and opened immediately. He usually wears red, warm clothes and often carries a wooden walking stick. His workshop is in Korvatunturi, Lapland, Finland, rather than at the North Pole like Santa Claus, or in Greenland. He is married to Joulumuori (tr. Mother Yule). Typical Finnish yule dishes include ham, various root vegetable casseroles, beetroot salad, gingerbread and star-shaped plum-filled pastries. Other traditions with a non-Christian yule background include joulukuusi ("Yule spruce") and joulusauna ("yule sauna").

Yule Goat!!!! I am VERY pleased we are at the shortest day, it seems a bit dark out there.....

Your blog is an encylopedia of sorts...WOW. Everytime I come here I get to know something new (of the past)...Thomas

Gary, I agree. Mow we ore on our way to longer days and those lazy, hazy days of summer.

Thomas, this is because I have an interest in many subjects.

Hi Barbara, this is new to me! So Santa Claus and our St. Nicholas are two different persons. St. Nicholas is more than 400 years old and refers to the bisshop of Myra who died on the 6th of December. Santa is even older but wears also red like St.Nick. Confusing isn't it. Very good post! Merry Christmas and a happy and healthy New Year.

Love the idea of the Wild Hunt. I've written about it several times myself.

Reader Wil, I try to find something a little bit different about some of the holiday festivities enjoyed at this time of year. There will be more posted as the holy day approaches.

Charles, finding the spark for our fantasy writing is all around us. I like the mythological stories best.

Jeeze, I have cousins in Helsinki and didn't know the half of what they got up to at Christmas time.

They also pour molten lead into cold water and try to predict the future from the shape the lead takes when it suddenly solidifies. Sounds weird, but try to imagine doing it after a few too many Yule drinks and it makes more sense

This is really interesting, and I love the painting. Thank you for your blog, I shall visit again!

good stuff, barbara... posted a couple on that theme, too :D

season's blessings to you and yours....

The wild hunt stirred my imagination! thanks. Aloha-

Alex, thank you for that bit of information. I'm glad to see you back for another visit.

Raph, welcome and thanks for dropping by. Your own blog is simply amazing and I'll be back for another visit soon, too.

Tony, thank you. This time of year has many different cultures celebrating their own festivities and it is important to try and include them in alongside Christmas.

Cloudia, that painting stimulates many possible stories I might write in the future about wild hunts.

Actually the Wild Hunt was connected to Samhain (Oct. 31st, roughly,) the start of the New Year, the 3rd harvest (that of animals,) & the beginning of the dark half of the year.

Lana, thank you for the correction.

Thanks for this info. Nice to know it stems from something deeper than merchants pressuring the christian church.

I love goats! I didn't know that part of the story. Thanks Barbara!