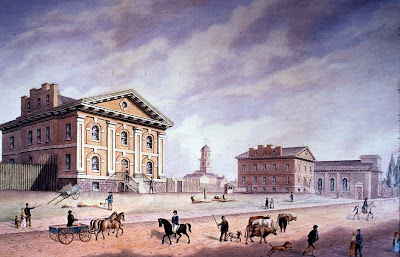 The First Cholera Pandemic began in Bengal, India in 1816 and spread throughout India by 1820. The Second Cholera Pandemic reached Ontario in 1832, brought by immigrants from Europe and Britain.

Mary Agnes FitzGibbon wrote about the reminiscences of William Wallbridge, of Belleville, Ontario, an old Upper Canada College student, on his recollection of her grandfather, James FitzGibbon during the Cholera outbreak.

The following is an excerpt from “Veteran of 1812: The Life of James FitzGibbon”:

“I first went to college in 1831, my brother Lewis and I being the first sent from this district. I remember Col. FitzGibbon well. He was a remarkable-looking man. I remember him in the House, for, not caring much to join my companions in their games, I used to find my way there.

“The Legislative Assembly then held its sittings in the old building opposite the market-place on King Street. I was particularly struck with the Clerk, a tall man, straight, upright, and decidedly military in his carriage, his clear incisive voice and prompt performance of his duties. I frequently met him on the way to the House, at the corner where St. Andrew's Church now stands, his height and soldierly appearance, as well as an eccentric habit he had of carrying his tall hat on the end of his cane, slightly above his head, instead of wearing it, that the air might circulate freely about his head, attracting my attention. His hair was always cut as closely as possible, a fashion more noticeable then than it would be now.

“In 1832, when the cholera was raging in Toronto — (it was bad in '34, but nothing to what it was in '32) — FitzGibbon was the prominent man. It was he who arranged and organized every plan for the care and comfort of the sick, and the decent burial of the dead. He was here, there and everywhere. He was afraid of nothing, whether in the removal of the sick to the hospital or in conveying the dead to the grave. I remember seeing him once with two carts close to the college, one for the dead, the other for the dying. He was standing near, and with his own hands assisting in their removal. He seemed to have a charmed life, to need no rest, and to be as exempt from contagion as he had been from the enemy's fire on the field of battle. He was not acting under any authority from the Government or city, but solely and entirely on his own responsibility, and through pity for the sufferers."*

[The General Hospital was west of the Upper Canada College on Russell Square; and it was opposite this building, standing, as it does, slantwise to the street, that Mr. Wallbridge remembered seeing FitzGibbon attending to the removal of the plague stricken people in 1832.]

“Toronto was a different place then. There was not a foot of pavement in the whole city, except it might be a plank or two set down between a few doorways. During the spring and autumn, the streets resembled freshly ploughed fields, the mud particularly adhesive and heavy.”


* Dickson, in his "History of Upper Canada College," speaks of FitzGibbon as "risking his life to labor night and day during the cholera seasons of 1832 and 1834."


My Town Monday is the brainchild of Travis Erwin.

Source: A Veteran of 1812: The Life of James FitzGibbon by Mary Agnes FitzGibbon (1894)
Photocredits: wikimedia.
Posted by Barbara Martin at 00:03

That was a good info.

People used to come to Abita Springs for the water, which was supposed to be healthy, any time they had epidemics in the city. Including cholera.

These type of accounts always make me thankful of the present, and maybe a little worried (if I turn on the news) of the future.

Now there's a disease we should not still be hearing about today in Africa. What a crime.

The history of cholera is an interesting one, and the contribution of John Snow in showing the connection between cholera and contaminated drinking water in London 1i the 19th century is an especially fascinating story.

Thank you for sharing this part!

John Snow was one of the first doctors to use surgical anesthsia, ether and chloroform. The use became more prevalent after he used chloroform on Queen Victoria when she gave birth to her last two children.

Other countries which have cholera outbreaks are areas in South America, Mexico, Central America, Asia, India and Russia.

do you think any of those nice buildings are still standing in TO?

Gary, sorry, no. I checked. The only building that remains from that time period is St. James Anglican Church on the NE corner of King Street and Church Street which had its beginnings in 1792, and is still there at the same location.

Cholera is a horrendous disease to die from, truly gruesome.