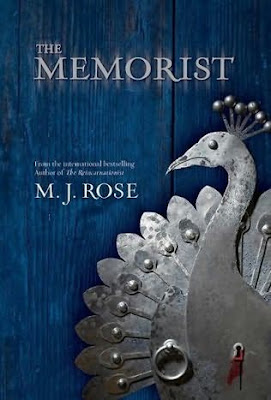 The Memorist is suspense fiction with romance and science fiction elements. The story continues with the reincarnation aspect of past life memories, a secret society, and an ancient secret about a flute made from human bone linked to Ludwig Beethoven.

The Memorist takes place in present-day Vienna and New York City with interludes during the 1814 Congress of Vienna and the Indus Valley of 2120 B.C.E. Ms Rose did extensive research to provide the detailed descriptions and historical elements of these locations. An interesting touch to the book are the epigraphs of quotations from famous people and sources on reincarnation. Ms Rose weaves the secrets of the past into The Memorist: history, science, and ancient ritual combined with prayer.

A few of the characters and references to the first book, The Reincarnationist, are carried forward. Malachai Samuels, the Phoenix Foundation’s director, seems to have an agenda of his own. He has been acquiring memory tools, a collection of objects that have the power to reveal memories of the past lives of individuals. Lucien Glass, a FBI investigator, has been trying to prove Malachai Samuels’ involvement in a crime.

Meer Logan, a former patient of Samuels, has been haunted since her childhood by past life memories accompanied by faint, seemingly familiar music. She thinks she has laid them to rest until she is reconnected with a crayon drawing from her childhood, and a photograph of the music box, the object in her drawings. The symptoms preceding the past life memories return, including recollection of her father’s Kabbalist teachings of working on issues from past lives until they are corrected.

Meer visits her father, an antique dealer in Vienna, who has discovered in a music box an unknown letter reputed to be written by Beethoven that offered clues to the location of a flute. She repeatedly has visions of the past, preceded by the same faint music, which connects her past life with Beethoven.

She learns Ludwig van Beethoven was entrusted with an ancient flute on which had been inscribed a melody he was to decipher. This flute, when played, would awaken memories of past lives in the listener.

Then a murder followed by the theft of both letter and box indicate to Meer and her father they are not alone in seeking the flute: that others are willing to do whatever is necessary to get to it first.

David Yalom, a journalist, has come to Vienna to cover the four-day ISTA conference and the performance by the Vienna Philharmonic Orchestra. He has planned a frightening demonstration to bring the world’s attention to the horror that terrorist attacks can bring to their victims.

Events quicken toward a calamitous conclusion, but not from a predictable angle; rather the consequences of actions unintended. The ending provided a satisfactory conclusion by fitting into the plotline.

Due to the chapters being short, I was tempted on many occasions to read a few more pages. Each chapter held a new clue or the hint of one, which, of course, kept me reading.

There are people today who have had similar experiences as Meer Logan does in this book. Ms Rose provides in her Author’s Note a brief explanation of the work done by doctors who have studied children with past life memories. Also included is a suggested reading list on reincarnation and related subjects contained in this story.

I await with anticipation the third book in this series.
Posted by Barbara Martin at 10:37

Your review definitely made me want to read this series.

Dark Wolf, I am pleased you liked it.

Bernard, there is a wealth of detailed information in this book which I could only touch on briefly. There are tidbits of history I am interested in doing further reading, like Mozart's death reputed to be caused by poisoning from revealing Mason's secrets in his "Magic Flute" music score.

Vienna holds many historical secrets for those wishing to search.

Please let me assure you that there is no shred of proof that Mozart has been poisoned, neither by Masons nor by poor Salieri. All unfounded rumors, to say the least. ;-)

I walked by the Lipizzan horses' stable today. *hint*

Merisi, thank you for setting the rumour straight.

Great, my favourite place in all of Vienna!

good write, barbara... i'll be looking for the series

Tony, it's a great mystery leaving you wondering what is going to happen next.

First, I dig that cover, it really stands out. Next, I enjoy plots that deal with the past and slowly unfold in an atmospheric way. Thanks Barbara, I will remember this one as I'm browsing the book store.

David, this is a book to savour as you are wont to do.

I've heard other good reports on this book.

MJ's first book is still on my TBR pile. I need to move it higher. Her books sound fantastic and I love her writing column in Writer's Digest.

Charles, then the rest of this series is likely to be good reads too.

L.A., she writes what she knows, being strongly intuitive. I read an interview where she said she knew certain things about her grandfather that she would normally not have known about.