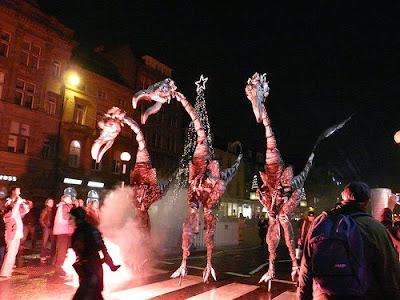 The New Years Eve celebration of Scotland is called Hogmanay. The name derives from the old Scots name for Yule gifts of the Middle Ages. The early Hogmanay celebrations were originally brought to Scotland by the invading and occupying Norse who celebrated a solstitial new year (England celebrated the new year on March 25). In 1600, with the Scottish application of the January 1 New year and the church's persistent suppression of the solstice celebrations, the holiday traditions moved to December 31 (Auld Year's Night). The festival is still referred to as the Yules by the Scots of the Shetland Islands who start the festival on December 18th and hold the last tradition (a Troll chasing ritual) on January 18th. [I like the idea of Troll chasing: think of the great fun it would be...] 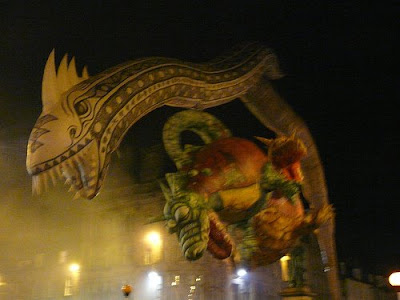 The most widespread Scottish custom is the practice of first-footing which starts immediately after midnight on New Years. This involves being the first person (usually tall and dark haired) to cross the threshold of a friend or neighbor and often involves the giving of symbolic gifts such as salt (less common today), coal, shortbread, whisky, and black bun (a fruit pudding) intended to bring different kinds of luck to the householder. Food and drink (as the gifts) are then given to the guests. 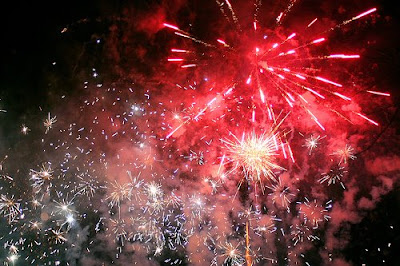 The Hogmanay custom of singing Auld Lang Syne has become common in many countries. Auld Lang Syne is a traditional poem reinterpreted by Robert Burns, which was later set to music. It is now common for this to be sung in a circle of linked arms that are crossed over one another as the clock strikes midnight for New Year's Day, although in Scotland the traditional practice is to cross arms only for the last verse.

Interesting that the Scots derived these customs from the old Norse men. In Latvia we had something very similar in that on New Year's eve people dressed in wild animal costumes and went dorr to door chasing away beasts and evil spirits. Sometimes it got rather exciting with a real bear joining in! Those were the days when hamlets were isolated and forests abounded.
Have a wonderful New Year!

Arija, since I'm about 25% Scottish I thought a post about Scottish customs would have an interesting slant...and this fit the ticket well.

happy hogmanay to you, as well :)

Tony, I think these festivals in Scotland are far more exciting than the way North America celebrates on New Year's Eve. I love the idea of parades with mystical monsters! And troll hunting in mid-January, wow.

Those are very cool looking monsters. I never heard of this. Gotta look closer.

Charles, you could always write a tale about the troll hunting.

An enlightening tour of an old tradition.