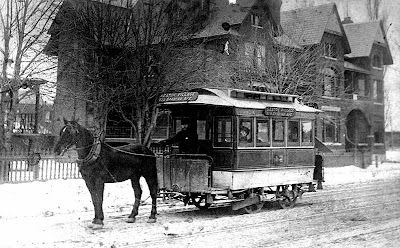 Seaton Village was originally settled by Colonel David Shank and Captain Samuel Smith. Both men were loyalists who served under John Graves Simcoe in the Queens Rangers during the American Revolution. All of the Lots west of Bathurst Street were granted to military men: Col. David Shank, Capt. MacDonnell (an aide-de-camp of General Brock), Capt. Samuel Smith, and Capt. Æneas Shaw (another captain in the Queen’s Rangers, a good friend of General Brock).

The Shank and Smith farm lots were acquired by George Crookshank in the early 1800s, who was a successful merchant in York, born in New York City in 1773. His parents, George Crookshank, Sr. and Catherine Norris, had been merchants in New York during the American Revolution. As they had sided with the British during that conflict, they lost everything. After the war they made their way to Upper Canada via New Brunswick, settling in York. George Crookshank, Jr. became a land speculator, and purchased the lots previously owned by Col. Shank, Capt. Smith and others. His property, which included his original 330 acres that had been granted by the Crown, now stretched from between Bathurst and Niagara Street, north to Davenport Road. He built a house in 1801 just north of Fort York on Front Street, west of Bathurst. His country home was located along Bathurst, just north of Bloor. A laneway from the Crookshank house ran north to his country farm, which is now part of Bathurst Street.

In the 1850’s the Village was laid out on the old Crookshank farm, but it wasn’t until 1888 when Seaton Village was annexed by the City of Toronto.

The Village is named after John Colborne, 1st Baron Seaton, Lieutenant-Governor of Upper Canada from 1828 to 1836. Seaton Village is bordered by Bloor Street to the south, Dupont Street to the north, Christie Street to the west, and Bathurst Street to the east. It is within the broader 'The Annex' neighbourhood, as defined by the City of Toronto. Although the Koreatown shopping district is at its southern border, it is sometimes referred to as the "West Annex". While Seaton Village shares several characteristics with the area to the east (notably its architecture and its popularity with University of Toronto students), it is generally quieter, family-oriented, and with smaller, less expensive homes.

That's a very important historical photo! Trams drawn by horses. That must have been a long time ago...Thanks for this post. We still have trams in our big cities: Rotterdam, Amsterdam, The Hague or, as we call it, Den Haag, and some other cities. They are cleaner for our environment.
Have a great holiday, Barbara!

Barbara : This is one of your shortest posts but it does full justice to Seaton Village. The picture is beautiful and apt

Thank you for your interesting article..
Wish you a wonderful Christmas!!
- Cheers from Guildwood.

Interesting to see how little villages were eventually incorporated into larger cities yet still bear some of the characteristics of their past.

What a great photo, Barbara. Seaton Village sounds like an interesting area.

Ah, Barbara's favourite type of post: historical photo AND a horse! Does it get better than that?

Nice post on ancient traditions. I miss teaching when we exchanged cultural values, traditions, celebrations, food, and shared the best of ourselves and our families.

The best of the season to you.

I know of some Canadian Crookshanks in Barrie area, but they spell it Cruikshank or something like that. They were on the Canadian Mounted Games team. Wonder if they are descendants?

Wow, is that a neat photo. It combines so many facets of winter, holidays, and pace from a time long gone.

Reader Wil, when I first saw the photo I wondered why there wasn't a team pulling the tram or that a draught horse, like a Percheron or Belgian, wasn't used instead of this particular horse.

Guild-rez, welcome and thanks for stopping by.

Your blog provided great ideas for my upcoming Toronto posts.

Patti, Toronto is filled with by-gone villages which provide their own character to the whole.

Debra, it has several interesting and unique shopping areas.

Jennifer, unfortunately there are too few historical photos with horses to post, but eventually they will be found here.

Junosmom, the spelling of Crookshanks is the Scottish way. Cruikshank is another way to spell it.

Bernard, glad you liked the photo.

If this is where I'm thinking of, Seaton Village is where I stayed when I went to Bouchercon in 2004.

I'm a sucker for these old photographs. What a winter wonderland. Thanks, Barbara :)

I think its a wonderful photo Barbara, and I enjoyed the history you so wonderfully explained. Here in Australia, much land was given also, to military men and many became graziers. Of course our history of wealth by"riding on the sheep's back" is legendary, (the aboriginal stockmen were only paid in sugar and tobacco), so these families became extremely wealthy.No one was ostracized by siding with the British as you can imagine!The establishment was always British.South Ausdtralia was the only state in this country founded and settled by free settlers from the United Kingdom.Other settlement was convict based. Land was sometimes given to exceptional convicts once they had earned their freedom, particularly in Tasmania. Best wishes for a Happy Christmas to you. I look forward to more of your posts for interesting holiday reading!

you have to think that is a VERY hard working horse!

Ironically the town I lived in for much of my Canadian experience was named for John, too; Port Colborne (on the shores of Lake Erie, the southernmost opening of the Welland Canal.)

eviljwinter, the Annex and the West Annex are west of Yorkville. Perhaps it is the location you're thinking of.

L.A., then I shall be pleased to enchant you as I have a stockpile of historic photos for future posts.

Pam, my great-great-grandfather, Robert McGowan, obtained land in Ontario through his military service with the British.

Gary, if you click on the photo there are no traces to the harness, just a collar, bridle and a pair of chains from the streetcar that are attached to the collar. An accident waiting to happen to the poor horse. There is the possibility that a full harness might trap the horse in an fall and it was easier just to unhook the chains from the headcollar.

Technically, a team of horses should have been used to pull this trolley.

Willow, I was thinking of your blog and your lovely vintage photos when I spied this.

Lana, no wonder you don't like winter being from there. Cold, damp and winds coming off the lake.

was pt.colborne named for him, barbara?

Great vintage photo!
Toronto has the best trolleys.
Thanks for a view of history a bit different than the one taught in the US. Aloha, Barbara

I'm a little late to your post but what a great photo! I would make that my Christmas card.