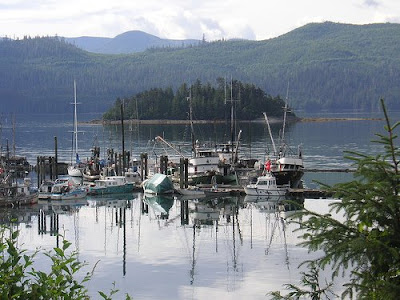 
There are some places in the world that are still untouched and largely inaccessible. Many anglers have a desire for isolation so British Columbia's Central West and Northern West coasts remain first choice fishing and boating destinations. This is where world class BC salmon fishing for trophy Chinook salmon (Kings) and Coho Salmon (Silvers), halibut, Red Snapper and Ling Cod are found in the protected, un-crowded waters between the West Coast of British Columbia and Vancouver Island. 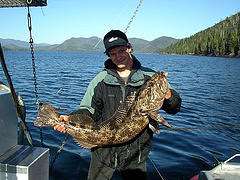 For a unique fishing experience, take a fly-in to alpine camps for authentic Western experience in South Tweedsmuir Provincial Park and Chilcotin Coast Mountains. Traditional Western-style base Outpost, guided pack trips to Charlotte Lake & Atnarko River for rainbow trout fishing, stillwater and stream fishing and wildlife viewing which can be made through a variety of outfitters.

In spite of their enormous mass, Humpback Whales are able to leap completely out of the water and are known for their acrobatics. adults range in length from 12–16 metres (40–50 ft) and weigh approximately 36,000 kilograms (79,000 lb). The humpback has a distinctive body shape, with unusually long pectoral fins and a knobbly head. It is an acrobatic animal, often breaching and slapping the water. Males produce a complex whale song, which lasts for 10 to 20 minutes and is repeated for hours at a time. The purpose of the song is not yet clear, although it appears to have a role in mating.

Found in oceans and seas around the world, humpback whales typically migrate up to 25,000 kilometres each year. Humpbacks feed only in summer, in polar waters, and migrate to tropical or sub-tropical waters to breed and give birth in the winter. During the winter, humpbacks fast and live off their fat reserves. The species' diet consists mostly of krill and small fish. 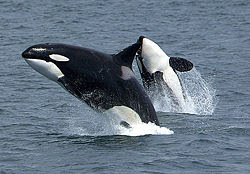 The Orca or Killer Whale (Orcinus orca), less commonly, Blackfish or Seawolf, is the largest species of the oceanic dolphin family. It is found in all the world's oceans, from the frigid Arctic and Antarctic regions to warm, tropical seas.

Orca are versatile and opportunistic predators. Some populations feed mostly on fish, and other populations hunt marine mammals, including sea lions, seals, and even large whales. There are up to five distinct Orca types, some of which may be separate races, subspecies or even species. Orcas are highly social; some populations are composed of matrilineal family groups which are the most stable of any animal species. The sophisticated social behaviour, hunting techniques, and vocal behaviour of Orcas have been described as manifestations of culture.

Although Orcas are not an endangered species, some local populations are considered threatened or endangered due to pollution, depletion of prey species, conflicts with fishing activities and vessels, habitat loss, and whaling. Wild Orcas are usually not considered a threat to humans. There have, however, been isolated reports of captive Orcas attacking their handlers at marine theme parks.

From my vantage point - this looks like paradise: nature in all its beauty and danger. Are you living near? Good for you:)

Danny, welcome. Unfortunately, I am in Toronto on Lake Ontario. I have taken many trips to British Columbia over years, being originally from Alberta. It was my early childhood experiences of the Canadian Rockies, and the treed and coastal areas of B.C. that hold my interests even now.

thx for the great pics/info, barbara

been too long since i last lived in bc...

can't think of a better place to spend the rest of my life, once i retire, despite the yahoo politics!

Those cod are some ugly fish, but pretty tasty. I'd love to see a whale in person somewhere other than the mirror in front of me.

Whales followed the aircraft carrier I was on back long ago in a galaxy far, far away. To this day, I can remember them leaping around next to the ship.

Tony, forget the politics...it's everywhere. Go where your heart leads you.

Travis, for whale watching you might have to take one of the boat tours. When I was last in Pt. Roberts, Washington (peninsula south of Vancouver), from the beach looking out into the Strait of Juan DeFuca I could see the Orcas leaping into the water. There is no mistaking those black and white colours.

Bernard, they probably liked the schools of fish being churned up underneath the ship.

Plus orcas have such handsome coloration.

indeed, and thank you for NOT calling them 'killer whales'....

Gary, there are three distinctive types which I did not outline in my post, although the photo I used is of the Transient Orcas. There are a Resident type which are slightly larger in size and different in colouration.

Tony, I did call them "Killer Whales" as Wikipedia had used the term, but I did describe them as being dolphins (which they are, and not whales).

Thank you for the comments on my blog for ABC Wednesday C = Carvings, I have added the reat of the carvings to my blod.

The photos of the whales are fantastic, and then so are all the other photos.

I have added you to the sites I visit.

Brian, there will be future posts on whales as they are one of my favourite mammals.