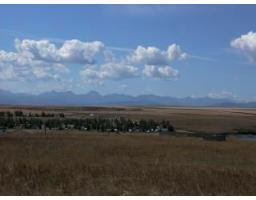 The Porcupine Hills near Fort McLeod, Alberta is an important habitat for elk, moose, mule and white-tailed deer, and at one time, herds of bison. This, in turn, provides a favourable location for terrain and prey species: mountain lions.

In and around the Porcupine Hills there are several pre-historic jumps where bison and elk bones have been uncovered. The largest of these is “Head-Smashed-In”, a World Heritage Site, located near the southern end of the Hills. 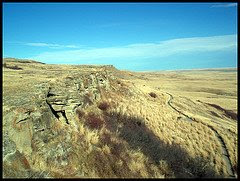 Wikipedia states: "The buffalo jump was used for 5,500 years by aboriginal peoples of the plains to kill buffalo, by driving them off the 10 metre high cliff. The Blackfoot drove the buffalo from a grazing area in the Porcupine Hills about 3 kilometres west of the site to the "drive lanes," lined by hundreds of cairns, then at full gallop over a cliff, breaking their legs, rendering them immobile. The cliff itself is about 300 metres long, and at its highest point drops 10 metres into the valley below. The site was in use at least 6,000 years ago, and the bone deposits are 10 metres deep. After falling off the cliff, the buffalo carcasses were processed at a nearby camp." 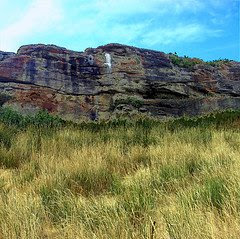 According to legend, the place is named for a curious Peigan youth pinned to the cliff wall by the tumbling bison. He was later discovered with his skull crushed. In Blackfoot, the jump is called, Estipah-sikikini-kots “where he got his head smashed in.” 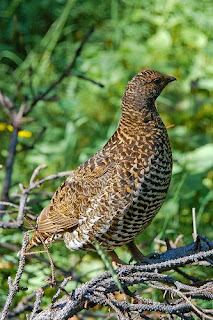 There are a variety of birds that breed in this location: blue grouse (sub-alpine forests), roughed grouse (Parkland aspen groves), including spruce grouse of the Sub-alpine spruce and lodgepole pine forests and sharp-tailed grouse of the grasslands. 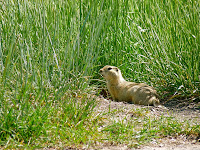 Photo Credit: jpraadt CC=nc-flickr. Richard's Ground Squirrel, also known as the gopher, are considered a pest on the prairies.


On the eastern side of the Hills are abundant ground squirrel populations and steep sided coulees with high density of nesting birds of prey: hawks, golden eagles, prairie falcons and Merlins. Golden eagles and prairie falcons are listed as Sensitive in Alberta.


The Golden Eagle, a very large bird of prey with a wingspan of 80 inches, travels fast enough to take ptarmigans and grouse in the air and preys on rabbits, prairie dogs (gophers), and squirrels on the ground. It is able to attack mammals up to the size of a deer. The eyrie is made of masses of sticks and built in a tall tree or on a cliff and the male will often defend breeding territories of up to 75 square miles. It is a very solitary bird that is occasionally seen in pairs but rarely in groups, preferring isolated areas away from humans. 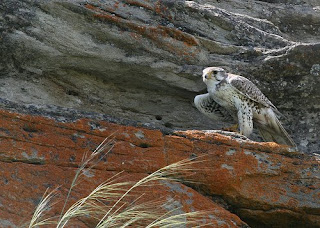 
The Prairie Falcon, with a wingspan of 40 inches, hunts for squirrels, birds, and rodents. It spends time searching for prey from perches high above the ground then with rapid wingbeats interspersed with short glides it swoops down on its prey from behind. The victim is caught in the falcon's talons as it swoops to the ground. It resembles the Peregrine Falcon but lacks the black crown.

In 1868 reports of gold in the Porcupine Hills brought in an expedition from the Montana Territory, outfitted by traders in Fort Benton. A year later the Saskatchewan Mining Prospecting and Trading Outfit moved into the area for the expressed purpose of moving the whisky trade into Canada, dominating it for the next five years.

By 1870, this illicit trade was in full swing in Whoop-Up Country, as it was known by the traders and dominated by those working out of Fort Benton. In 1872, the government in Ottawa sent Colonel Robertson-Ross, Commanding Officer of the Canadian Militia, to investigate the lawlessness. He traveled the trail between the Porcupine Hills and the Whaleback en route to the North Kootenay Pass in the Castle Wilderness.
His visit and reports on the numerous American forts on Canadian soil engaged in their trade prompted the formation of the North West Mounted Police in 1874. (A future post will cover their hardships from Fort Garry, Manitoba to the Canadian west.)

Today, the bison herds, most of the big game at that time, grizzly bear, elk, and the way of life of the Blackfoot Confederacy Nations were decimated by the whisky trade within four short years of the Colonel’s visit; a total span of six years for the whisky trade, which included trading posts and hide-outs in the Porcupine Hills. The wild terrain and vegetation remain, and some of the big game species recovered.

Hi Barbara, thanks for stopping by my blog via Travis.

I love your pictures of Canada. Never been to Toronto, we love to go to Whistler in the summer & fall. I know most people go for the snow but I had enough snow growing up to last me for a lifetime. Would like to retire to that area, actually Furry Creek, BC but probably can't afford the million plus homes. Have to be
content with "Life on the Prairie"in Texas.
I'll definitely be stopping by to see what new pictures & info you have on your site. Katrina

Great history. I loved the grouse picture. I would love to see that Buffalo site as well.

Katrina, I'm pleased to see you enjoy nature as much as I do.

Charles, I will amend the post to add more photos and bird information.

You have a great site here!

I, too, would love to visit Alberta.

With a centerfire rifle slung over my shoulder.

And a knowledgeable hunting guide by my side.

Thanks for sharing, Barbara.

Hi Pack, welcome and thank you for visiting. Come again any time.