Originally, the Toronto Islands were a series of continuously moving sand bars, originating from the Scarborough Bluffs and carried westward by Lake Ontario currents. By the early 1800s, the longest of these bars extended from Woodbine Avenue, past the marshes of the lower Don River, forming a natural harbour between the lake and the mainland. 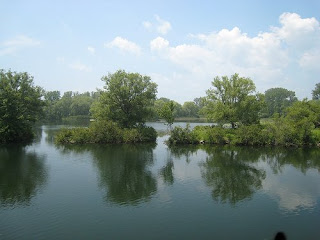 The peninsula and surrounding sand-bars were first surveyed in 1792 by Lieutenant Bouchette of the British Navy. D.W. Smith’s Gazetter recorded in 1813 that “the long beach or peninsula, which affords a most delightful ride, is considered so healthy by the Indians that they resort to it whenever indisposed”. Many Indian encampments were located between the peninsula’s base and the Don River. During migration periods vast numbers of birds frequented the sand-bars and marshlands of the Don River and Ashbridge’s Bay. 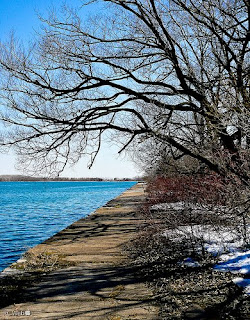 In the 1850s, a number of severe storms and strong wave action eroded the peninsula, which required frequent repair to small gaps until, in 1858, an island was created when a spring storm completely separated the peninsula from the mainland and the gap was not repaired. The Eastern Gap has since become an important shipping route in the Toronto Harbour. Another storm, a hundred years later known as Hurricane Hazel, blew through Toronto and split what had been one large island into eight smaller ones that exist today. 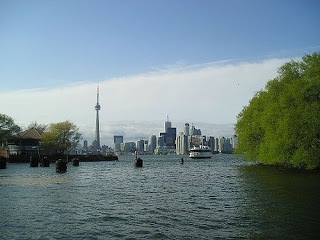 
The shorelines were stabilized by dredging projects to reduce sand-bar movement, to create deeper boating channels, or raise the land levels in general. On January 1, 1956, the Toronto Islands were developed as a regional park which included: fully accessible washrooms, a public marina, an amusement area and petting zoo, and the establishment of naturalized areas and wildlife reserves. 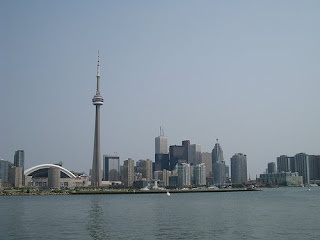 
The Hanlan family was among the first year-round inhabitants on Toronto Island, settling at Gibraltar Point in 1862. The west side of the island, commonly known as West Point, became a summer cottage community for the citizens of Toronto. In 1878, a hotel was built by John Hanlan at the north-west tip of the island and soon the area became known as Hanlan’s Point. One of John’s sons, Edward “Ned” Hanlan, had international recognition as a rower and held numerous world records. Babe Ruth, a baseball legend, hit his first professional home run at the baseball stadium built on Toronto Island in 1914. 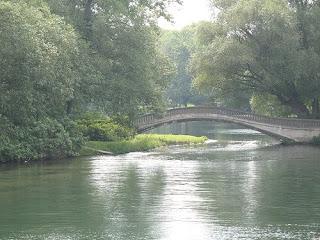 
Centre Island is between Hanlan’s Point and Ward’s Island. A carriage route along the peninsula connected the mainland to Gibraltar Point Lighthouse later evolved into Lake Shore Avenue. Two distinctive bridges, still in use today, were built to accommodate the extra traffic from visitors and residents who used the Centre Island Ferry. 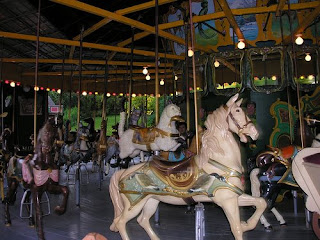 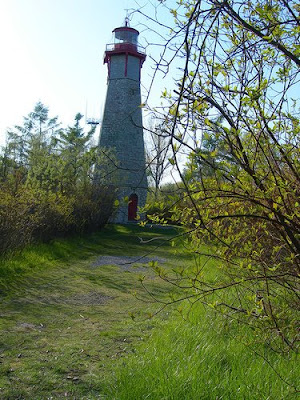 The Gibraltar Point Lighthouse is the oldest landmark in Toronto. Its light beam has guided ships and boats into the harbour for over 150 years. In 1808 the Upper Canada Gazette printed the following: "It is a pleasure to inform the public that the dangers to vessels navigating Lake Ontario will in a great measure be avoided by the erection of a lighthouse on Gibraltar Point which is to be completed in compliance with an address in the House of Assembly to the Lieutenant Governor." This address was dated March 9, 1808, and on April 6th the Lieutenant Governor visited the peninsula and chose a site for the lighthouse. 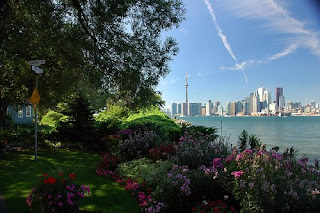 
Ward’s Island, the east section of the old peninsula, was named after David Ward, a local fisherman, who settled there about 1830 and raised seven children. His son, William, built the Ward’s Hotel in 1882, was renovated in 1922 and the remaining building operated as a grocery supply and ice-cream parlour until its demolition in 1966.

Anyone who wants to see the Toronto skyline from across Lake Ontario can travel by ferry over to Toronto Island, a paradise of over 600 acres of parkland waiting to be discovered. Walking trails, picnic areas, supervised swimming beaches, bicycle and boat rentals, tennis, volleyball, Centreville amusement rides, a petting zoo, public marina, lighthouse, and much more await the visitor. For those who do not bring a picnic lunch, there are several snack shops and licensed restaurants on Centre Island. The islands are popular for locals and visitors alike; over 1 million people visit the islands each year.

Sources:
Toronto.ca
National Post, December 28, 2007.
This post was the brain-child of Travis Erwin. Check out his blogsite to see other My Town Monday stories around the globe.
Posted by Barbara Martin at 19:28

Terrie, thank you. I actually had a difficult time weeding out information which I wanted to leave in, otherwise the post would have become the neverending story.

Although I've been to Toronto 4-5 times, never been to these points. Thanks.

Great pics and info. I think it would be so cool to live on an island.

What a beautiful place. Very interesting post, Barbara. Hurricane Hazel must have been quite a storm! Turning the islands into a park was a great idea. I haven't been in the Toronto area since 1994 and I'd forgotten how lovely it is.

Very nice!
Used to live in TO and have taken the ferry to the islands.

Pattinase, in future posts I will be writing about little known places and events around the Great Lakes and Toronto.

Travis, the residents on the Toronto Islands travel the ferry to and from Toronto, and there are no cars allowed. Groceries have to be carried over.

For living on a more secluded island I think a person accustomed to living away from any sizable population would do well. Of course, we know what you would do with your spare time: fish.

Linda, yes, Hurricane Hazel was a violent storm as was the Great White Hurricane in November 1913. There will be future posts on the sudden weather systems which occur from time to time.

Bernita, welcome and enjoy your visit.

Wow, that was good. It was like reading an interesting magazine with good photos of the subject.

Texlahoma, welcome and thank you for your appreciative comment.

What a very fun post! I'm from Toronto, but now live in California. I'll be back to TO this summer and will be taking my kids to Centre Island!

Barrie, welcome and thank you for commenting on my blog. I'm certain you will see many of your favourite places on your visit.

Seems like a beautiful place, Barbara. It's been on my list of places to go for some time. HEre's another reason.

Debra, Toronto does have its gems for tourists and locals. I hope I will be able to provide you with more reasons to come for a visit.