My post takes place 75 miles (120km) south-west of Toronto near Niagara Falls during the War of 1812. 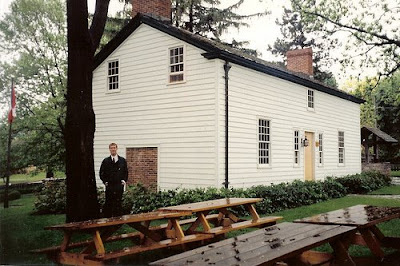 The Secord Homestead in Queenston was reconstructed in 1971 by Laura Secord Inc. Open for tours during the summer months, the Homestead features authentic furnishings of the 1812 period. The company's signature chocolates and ice cream are available in an annex building, which was built on the spot thought to be the location of the original summer kitchen. 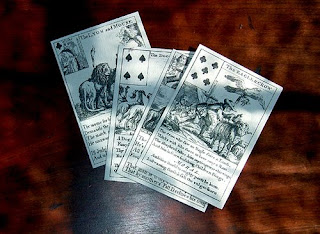 These playing cards located in the parlor of the James and Laura Secord home had moral lessons’ on the bottom because folks in the late 1700s and early 1800s considered card playing immoral.

Laura Ingersoll Secord, born in Great Barrington, Massachusetts (September 13, 1775 to October 17, 1868) was a Canadian heroine of the War of 1812. Suffering the aftermath of the American Revolution, her father, Thomas Ingersoll, moved the family to Canada in 1795, and in 1797 she married the Loyalist James Secord, son of an officer of Butler's Rangers (the Ingersolls themselves were not Loyalists). James and Laura resided in Queenston in Upper Canada (present-day Ontario), while her family went on to settle present day Ingersoll, Ontario. On October 13, 1812, James Secord was injured at the Battle of Queenston Heights, part of the emerging War of 1812.

In June of 1813 the American army invaded again and the Secord home was forced to billet American officers. Laura became aware of plans for a surprise attack on troops led by British Lieutenant James Fitzgibbon at Beaver Dams, which would have furthered American control in the Niagara Peninsula. While her husband was still suffering the effects of his injury, Laura set out to warn Lieutenant Fitzgibbon herself. She walked approximately 30 km from present day Queenston through St. David's, Homer, St. Catharines and Short Hills at the Niagara Escarpment before arriving at the camp of allied Native warriors who led her the rest of the way to Fitzgibbon's headquarters at the Decew home. A small British force and a larger contingent of Mohawk warriors were then readied for the American attack with the result that almost all of the American soldiers were taken prisoner in the ensuing Battle of Beaver Dams.

Over the years, Laura Secord and James Fitzgibbon petitioned the government in request of some kind of acknowledgment but to no avail. Finally, in 1860, when Laura was 85, Albert Edward, Prince of Wales (later Edward VII), heard of her story while travelling in Canada. While stopped in Chippawa near Niagara Falls, he was made aware of Laura's heroics and her plight as an aging widow and later sent an award of £100. It was the only recognition that she received in her lifetime.

Laura Ingersoll Secord died in 1868 at age 93 at the Village of Chippawa (today part of Niagara Falls, Ontario).
Laura and her husband attended Holy Trinity Church in Chippawa where their grave markers are presently located, as well as a few relics of the family. Laura and James are buried in Drummond Hill Cemetery in Niagara Falls, Ontario at a monument (with a bust of Laura on top) close to that marking the Battle of Lundy's Lane. 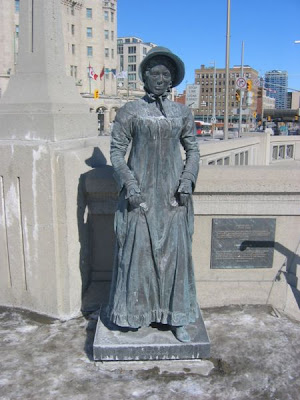 In 2003, Laura Secord was designated a Person of National Historic Significance by the Minister of Canadian Heritage, for her heroic actions during the War of 1812. 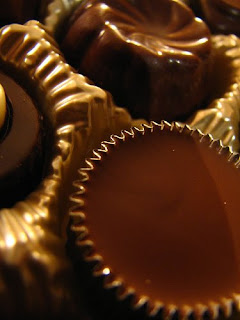 A story of Laura Secord is not complete without a visit to Niagara Falls. 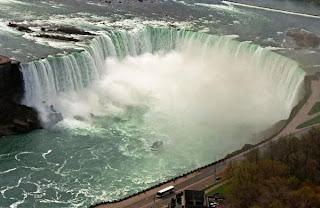 The name “Niagara” is said to originate from an Iroquois word "Onguiaahra" meaning "Thunder of Waters". The region's original inhabitants were the Ongiara, an Iroquois tribe named the Neutrals by French settlers, who found them helpful in mediating disputes with other tribes.

There are the daredevils who tempted their fate by going over the falls in various manufactured barrels, but the best story is known as “Miracle at Niagara” from Wikipedia:

“Roger Woodward, a seven-year-old American boy, was swept over the Horseshoe Falls protected only by a life vest on July 9, 1960, as two tourists pulled his 17-year-old sister Deanne from the river only 20 feet (6 m) from the lip of the Horseshoe Falls at Goat Island. Minutes later, Roger was plucked from the roiling plunge pool beneath the Horseshoe Falls after grabbing a life ring thrown to him by the crew of the Maid of the Mist boat. His survival, which no one thought possible, made news throughout the world.”

My Town Monday is the brainchild of Travis Erwin at www.traviserwin.blogspot.com where he links other posts from around the globe.

we're from the same neck-of-the-bush... i'm from welland, and my bil is from chippewa

of course, two of paul bernardo's murder victims were found in the beaver dams area... :(

I have had the delicious chocolates, but had no idea of the history. Thanks for another interesting post, Barbara.

Uhm, chocolates. Those look incredible. Lana is from the Niagara area herself.

Laughingwolf, sorry to tell you this, but no I'm not from Niagara Falls. Travis made a mistake. Must be all that excitemnet over at Criminal Brief.

Charles, ditto the above for you too.

I had no idea about any of this bit of history! The falls are on my to do list!! I'll look out for the chocolates as well!

Interesting. I was just telling lizzydee about the Shaw Festival in Niagara on the Lake and here comes a blog entry about Niagara Falls. The first time we went to see them, we couldn't find them.

Laughingwolf, at least we're from the bush, mine being there was nothing but bush from 97th avenue in what used to be Jasper Place next to Edmonton to the North Saskatchewan River, except for the mink farm.

Lyzzydee, the MTM posts are good for introducing historical facts that may not be common knowledge to others.

Pattinase, the road signs here can be vague. I've found the same in the TTC subway system where directions are unclear. But once you find where you're going, you'll be able to retrace your steps.

We visited Niagara Falls last summer - I was amazed at the beauty... Love the story of Laura too. And the picture of those chocolates is giving me a huge craving....

Great post. You packed a lot of interesting history in there. I like those cards. And i first listed Niagra Falls beside your name since that was the area of focus in this week's post.

Very interesting post, Barbara. The "moral" playing cards are very interesting. I've never heard of them before. And the chocolates look really yummy. I'm glad Laura got some recognition (and some money) before her death.

I went to Niagara Falls once in December. The sun was shining and there was snow on the ground and the views were simply spectacular. Really something to see.

Hi Barbara, Thank you for your visit to my blog and I had a nice time here wandering through your world.

I love the idea of "Monday My Town" postings. I learned a thing or two about Laura Ingersoll Secord as well.

The photos in your post on the Sun Highway were stunning. It is such pretty country and makes me miss my native home in the Oregon Cascades.

Monnik, chocolates seem to have that affect on most people. The ice cream cones get a dark chocolate "Laura Secord" cameo on top which makes the flavouring just a bit more special.

Travis, there was a considerable amount of history during the War of 1812 and had to limit it to Laura Secord. I will be doing a future post about some of the battles.

Linda, playing cards were associated with leading users down the path to gambling and other assorted "immoral" behaviour. They were also thought to be connected to Tarot cards which were associated in that time period and before to the devil.

The opening to the Going-to-the-Sun highway has been delayed until at least July 4th due to unprecedented heavy snowfalls and avalanches.

Ms. Secord's journey to warn Fitzgibbon at Beaver Dams through the Canadian wilderness was an awesome feat.

rats, i added a longish post, but either google ate it, or there was tmi? sorry

Fascinating! Put me in the mood to visit Niagra Falls and have a Laura Secord chocolate! (both of which would be firsts) ;)

Bernard, it certainly was a feat to make an excuse to the army after plying them will liquor to leave the house, and then make one's way through the trails in the bush to Beaver Dams all the while worrying about your husband and whether or not you'd make it to Fitzgibbon. One determined lady.

Laughingwolf, it didn't appear in my spam folder. I've lost posts in the twilight zone of blogging just when I'm certain it saved. Often the ones where the words were perfect, and then to have to come up with new words that aren't quite right.

Alyssa, then you'll just have to come for a visit. Maybe one of those stay a Saturday night specials the hotels have. The Laura Secord chocolates are wonderful, melt in your mouth. The ice cream is similar to the old-fashioned kind, creamy.

What an interesting post this is! I've only been to the US side of Niagara, but next time we want to go into Canada. We love that area! I enjoyed reading the history and I wouldn't mind some of those chocolates either. ;-)

oh well, i forgot what i wrote, but that it had to do with living in alberta for some eight years....

Fascinating Post - I will visit your country one day !

Lin, welcome and thank you for your kind comments.

Debbielou, knowing a bit of history of the places you intend to go help when you get there.