Going to the Sun Highway

This post was prompted unknowingly by Mary Witzl, who commented in the previous post about trips through the Rockies, and by Linda McLaughlin recalling her mother's fear of heights. 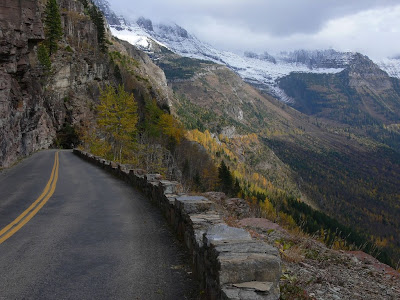 For a stunning mountain panorama take a drive up into the interior of Glacier National Park in Montana on the "Going to the Sun" highway. My first trip there was at about age 4 or 5 -- the family had gone in the old Vauxhall (black with orange signal indicators that flipped up from beside the front doors). We had stopped at a level area next to a large bank of snow not yet melted by the summer sun. My father used the snow to put in the radiator as it had boiled over. When the car cooled off sufficiently we went on our way.

Several years later we returned in a '51 Chev, stopping at the same location to ease the vehicle's radiator. Yes, the large bank of snow and ice was still there. Another visitor to the park commented it was the tail end of a retreating snow pack as the snowfall in some winters was heavier than others.

"The road is one of the most difficult roads in North America to snowplow in the spring. Up to 80 feet (25 m) of snow can lie on top of Logan Pass, and more just east of the pass where the deepest snowfield has long been referred to as Big Drift. The road takes about ten weeks to plow, even with equipment that can move 4000 tons of snow in an hour. The snowplow crew can clear as little as 500 feet (150 m) of the road per day. On the east side of the continental divide, there are few guardrails due to heavy snows and the resultant late winter avalanches that have repeatedly destroyed every protective barrier ever constructed. The road is generally open from early June to mid October."

This serpentine highway was named after nearby Going-to-the-Sun Mountain, which in turn was named after the journey of a Blackfoot Indian god who, according to legend, came to earth to help his people and returned home by climbing up the mountain and disappearing into the sun. 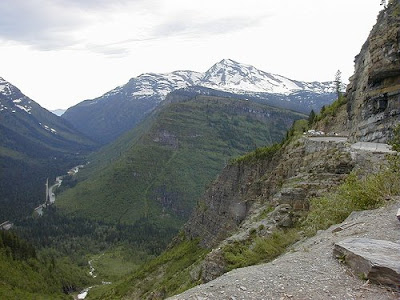 In 2007, it was the first year of a $170-million, 10-year reconstruction of the highway, the most thorough rebuilding since it was officially opened in 1933. Visitors will still be allowed to bike or drive their own vehicles on the mountain road, but should expect construction delays.

The 2007 opening was postponed in mid-June due to a torrential rainstorm that washed away a huge section of the highway. The road opened July 1st, the latest opening since 1943. In some years, snowstorms can slow travel and even close the road in July and August.

Glacier National Park was designated in 1910, and by the 1920s, as auto travel evolved, people were clamoring for motorized access. Construction on the road began in 1925, and it was a daunting task for the equipment of the time. Using horses, steam-powered shovels and tons of dynamite and black powder, workers began carving away the steep mountainsides to create a narrow dirt road. The road was opened in October 1932, with an opening ceremony on July 11, 1933.

Rebuilding the 18-to-22-foot-wide roadway is especially painstaking because the job is not just putting down a new road but rebuilding the old one, which is a National Historic Landmark, to exacting historic standards. There are huge stonework arches and stone guard railings, for example, built by Russian stonemasons, that have to be replicated. Two new quarries had to be opened to provide matching rock.

Currently, the road is battered and patched; however, when finished it will provide access to deep wilderness in Montana's interior.

To see the 2008 snow plowing conditions of Glacier Park go here where there is a slide show revealing how deep the snow is. For the faint of heart who are bothered by heights, DO NOT look at the photos.

Gorgeous panoramas. I've never been to Montana, but I've longed to visit. I've set stories there.

Charles, the foothills have tall grasses that bend and undulate with the passing of the wind. Montana is a beautiful state with changes of elevation. A good place to rest the mind and consider new creative enterprises.

Great post, Barbara. LOL, I'd never have thought of using snow to cool down the radiator. My mom would have hated that road, but isn't it fascinating that they managed to build it back in the 1920's and 30's. Glad it's being restored.

I've never been to Montana, either, and now I'm ready to jump in the car and head there. Beautiful scenery.

Linda, from a few choice comments and viola!

The engineering and architecture used to create this highway was the same or similar to that in the national parks in the Canadian Rockies.

Montana for me is almost being home.

of course, you know alberta, bc and the yukon also have great scenery, but i can't think of anything quite comparable...

great mind-clearing, for sure

i, too, learned from watching my dad to use snow to cool rads and wash crud off windshields

Laughingwolf, welcome. Since I haven't been to the Yukon I am unable to comment on the mountains there, but many of the valleys in the Rockies in BC and Alberta are wide, while these valleys in Glacier are deep and narrow.

Yes, snow is good for radiators, windshields and cleaning off dirty headlights.

Leigh, welcome and come again. There are several posts with panoramic views.

indeed so, barabra... good to meet another writer, can never be too many ;)

I came across your blog today during a Google search. Your photos and comments on the US/Canadian West are great. Your
combined photo and writing skills make the articles compelling to read.

I've included a post on our web site www.RockiesPhotoAdventures.com
about your blog. Our blog focus is "Users Sharing Locations, Events, How To Tips and Photos of Their Adventures in the Rocky Mountains".

Jim and Janice, welcome and thank you for the link. The Rockies are a favourite place for me to visit, although my yearly trips ended when I moved east.

I thought writing about past trips and visits would ease my wunderlust, but it has only served to increase it.

An incredibly beautiful place, Barbara. I am, in the words of my children, a "known wuss", when it comes to heights, bridges and the like. Once, during a mountain drive, I asked my husband if he could go a little slower. He was driving 5mph.

Debra, if you feel brave from your chair take a look at the National Parks Service video of the dozers clearing the snow. I get the odd queasy feeling when watching a movie or video if heights are involved, but this is rare.

The photos here do not show some of the actual drops from the roadway, as there are several when coming out of tunnels. There are stone guardrails though that sometimes make it through the winter.

I'm fine with heights and used to laugh my head off as my father took those Rockie Mountain bends at a heart-stopping speed. I never once thought we could end up going over the edge. Now with my own children, though, I have developed a sense of mortality. I can see why my mother was scared...

Beautiful photographs. And I loved Montana.

Mary, yes Montana is a very nice place to visit.