Today I’m going to introduce you to a neighbourhood within Toronto: Mimico. This is where I live, a community adjacent to Lake Ontario; yet far enough away from the downtown core. When looking out from one of the many shoreline parks, you can see just how far you are from downtown and what a relief that is. 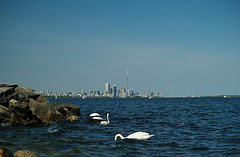 Some days, early in the morning, I go for a walk to a small parkette at the end of Miles Road just off Lake Shore Boulevard West to watch the sun rise or listen to the waves break against the retaining wall of rocks. On particularly windy days or when a storm system is moving in from New York State across the water, the white caps and waves are higher, breaking in a similar pattern to what one finds on a beach at the ocean. They crash against the rocks, the spray reaching up over the top (6 to 8 feet) and it sounds just as if you were hundreds of miles away at the ocean.

The large waterbirds in the photo are Trumpeter Swans, and they usually have cygnets to show off near the end of June. The young birds are able to leave the nest soon after hatching but stay with the parents until the following spring. The youngsters have dull gray-brown plumage and a pinkish bill. The Swans are prevalent here in the east after being introduced when their numbers dwindled almost to extinction. Their normal range of habitat is along the west coast of British Columbia to Alaska, as well as some parts of North Dakota in the United States. The Trumpeter Swan feeds on insects and aquatic plants using its long neck to reach them. They have a long, straight neck, white plumage, and a black, straight bill, as well as black facial skin that forms a "V" on the forehead. They have a wingspan of 96 inches.

Further east down the shoreline from where I live, Colonel Samuel Smith Park is the City of Toronto’s restoration project of renovating the former Lake Shore Mimico Lunactic Asylum.

You read correctly. There are creepy associations to those words, and certainly there are horrific scenarios which may have been documented. But they will be not be stated here, at this time. My post is mostly about parks.

The Etobicoke and New Toronto Historical Societies described the area as: “The waterfront lake filled area is naturalized with grasses, shrubs and small trees. The shoreline is a combination of rocky headlands, cobble beaches and protected wetland which blends further north into mature trees and landscaped lawns of the former hospital grounds.”

The Etobicoke Historical Society wrote a nice, long winded article about the namesake of the park, Colonel Samuel Smith, which I am about to summarize for my readers.

Colonel Samuel Smith was born at Hempstead, Long Island, on December 27, 1756. His grandfather had emigrated from the north of England in about 1740 and purchased a considerable sized estate. Sam’s father obtained a commission into the Queen’s Rangers for him. (Having money did wonders back then for careers. If a commission had to be paid for a job then Sam had some qualities lacking.) (My comments are those in parenthesis).

In the American Revolution Sam was wounded at Brandywine and promoted to captain before he turned twenty. After the war he retired at half pay to New Brunswick, going to England and then toured Europe.

After returning to England he joined Simcoe's new Queen's Rangers as a captain. This new corps of infantry came to Upper Canada to assist in the erection of public buildings, the construction of bridges, the formation of roads of communication and in any other civil or military duties which His Majesty's service required. The original thought was they would devote 2 days a week on public works, 2 days on military exercises and 2 days for their private advantage.

In 1795 Abraham Iredell surveyed the "military lands" in Etobicoke between Royal York Road and Kipling Avenue from Bloor Street to the Lake. Sergeant Patrick Mealey was the first person to receive a patent for land in Etobicoke, on March 18, 1797. The Rangers were disbanded in 1802.

Simcoe placed these "military lands" in Etobicoke to protect his new town of Toronto, which he called York, from a possible attack by Yankees or Indians.

What was to be known as the Colonel Smith Tract stretched from Kipling west to Etobicoke Creek from Bloor south to the Lake. Samuel Smith had a town residence on Richmond Street and also a Park Lot which extended from Queen to Bloor in what is now mid town Toronto. His Etobicoke home was just south of Lake Shore Boulevard and east of Etobicoke Creek. In 1804 when Etobicoke's population was 40 it included for Samuel Smith 2 males over 16 years, 2 females, 2 male children and 3 female children for a total of 9. In May of that year Lord Selkirk, of the Hudson's Bay Company and the Red River Settlement, wrote that he rode to Etobicoke to breakfast with Colonel Smith. Robert Gourlay wrote in 1818 that he visited Colonel Smith in his home, and found him lonely and desolate on the lakeshore. On 2 occasions Colonel Smith when our Lieutenant governor was out of the province acted as president of the council, in effect, chief administrator of Upper Canada.

In 1952 Colonel Smith's home in Etobicoke was demolished to make way for a development. The Etobicoke Historical Society placed a historical plaque in the nearby Dominion Store to remind Canadians of the landmark. Now, even the Dominion Store has disappeared.

In 1868 the Ontario Provincial Government decided the model farm west of Queen's Park had to go. Tenders were called for a new site within 10 miles of Toronto near a railway. Nearly 600 acres were purchased between Royal York Road and Kipling north of the railway to Evans Avenue. On November 28, 1871 contractors HJ and RT Sutton staked out the locations for buildings. Then there was a change in the Government and what was to become the Ontario Agricultural College was established in Guelph.

In 1887 the Government finally approved the Toronto Asylum on Queen Street using part of the "model farm" property at Mimico.

The following year 10 patients were sent to live there and practice agriculture. In 1889 they moved into the first "cottage" in what for years has been the Lakeshore Psychiatric Hospital.

Also in 1887 the Government allowed the Victoria Industrial School for bad boys to be located on the "model farm" property to the west of Royal York Road. It had a number of buildings but closed in 1934. In 1918 a branch of the Guelph Reformatory was established on the "model farm". Its facility included a brick and tile factory using shale dug up in an adjacent field.

Etobicoke had some gambling dens in the 1930s and 1940s and the proprietors when caught were "sent to the brick yards of Mimico".

The Lakeshore Psych began with 55 acres on the east side of Kipling Avenue. The 2-storey brick "cottages" were to accommodate groups of patients with specific illnesses. In 1903 an additional 73 acres were purchased on the west side of Kipling for agriculture use by the patients. In 1958 the Lakeshore Teachers College was built on the north west corner of the property. Four years later the RL Clark water filtration plant was established at the south west corner of the property.

Humber College moved into the Teachers College building in 1972 and at the end of the decade, the Provincial Government closed the Lakeshore Psychiatric Hospital.

The site now includes the Colonel Samuel Smith Park as part of Crombie's Waterfront Trail. The Conservation Authority has added 21.5 hectares of landfill and created 3.6 hectares of wetland area, a popular spot for birders and boaters. The Colonel Sam Smith Park was officially opened in September 1996.” 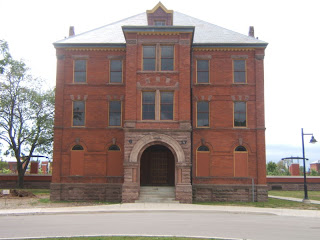 This photo is of one of the former cottages, now known as the Police Academy. 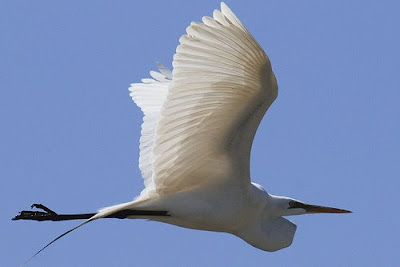 These new wetlands along the shores of Lake Ontario where many birds, including the Great Egret, pictured here, will be able to re-establish their numbers. These long legged birds walk through water, taking measured, careful steps, while stalking fish, frogs, and water snakes. Great Egrets nest in colonies, generally built in trees but will use marsh reeds and sticks. Their wingspan is large at 51 inches, and they prefer a habitat of lakes, marshes and wetlands. Their black legs distinguish them from other white herons which are smaller. 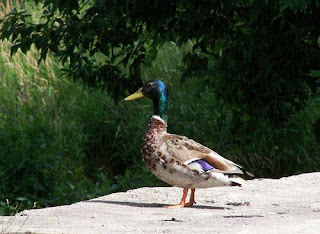 Another common water bird is the Mallard which nests near water, shallow ponds and marshes. The mallard pictured here is a male. Females are a mottled brown with an orange bill with black markings. Mallards feed on aquatic plants, insects and small fish. They are found in the wild and in city parks where water is present.

This is a coffee boutique at 2413 Lake Shore Boulevard West in the west end of Toronto in what used to be the Village of Mimico. Birds & Beans sell organic coffee in their store and on-line. 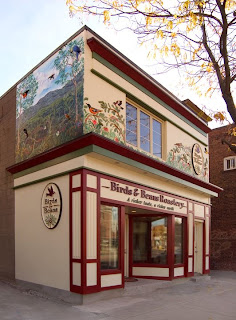 Their motto is "We want to take your coffee experience into a whole new realm. We are in passionate pursuit of the best cup of coffee in the city, the country and even the world. We love coffee and we love to share our experience."

As far as I am concerned, the coffee they sell is premium grade, no more expensive than coffee from Second Cup, Timothy's or Starbucks. When I run out of ground coffee I make it part of my shopping trip for the day, stopping to have a cup of the day's choice and one of the pastries or muffins baked on the premises.

Every Saturday and Sunday from 2:00 p.m. until 4:00 p.m. they have Jazz playing on the second floor which makes a nice diversion after a busy week. If you go, just say I sent you.

For further information on this company you can visit: www.birdsandbeans.ca

This post comes to you via Travis Erwin's brain child: My Town Monday. Check out his site to see other far off places.

Water bird information obtained from: A Field Guide to the Birds of North America by Michael Vanner.

Great pictures of the birds. I'm glad to hear of the parks. Without parks a city would be unlivable to me.

Great post, Barbara, interesting and informative with beautiful pictures. I haven't been to Toronto in years, but I've enjoyed visits in the past. What a great view of the city from the park!

FWIW, Col. Smith wasn't the only one to purchase a commission in those days. That was standard practice in the British Army, even through the Napoleonic Wars. Can't remember when they discontinued the practice, but there was a big scandal in the late 1700s when the mistress of one of the king's sons was caught selling commissions. (I really don't remember the details now.) Anyway, having to buy the commission doesn't necessarily mean Sam wasn't deserving.

Charles, you can look forward to more posts on parks and certainly more photos of birds, wildlife including panoramic views.

Linda, certainly there are a multitude of purchased commissions to the British Army. Charles Dickens paid for one of his sons to go to Canada, who later joined the Northwest Mounted Police.

There were also those family members who were "remittance men", paid to leave and never come back. But, I will leave that for another post as I am acquainted with a person whose ancestor was sent from the royal court in France in the early 1600s.

Thank you for stopping by Brain Freeze.
Ejoyed your site. The bird photos are very nice. Stop back by anytime.
Have a great day.

Seems like a great community. Sorry it took me so long to get your post linked but I have been away from my computer.