The Case of the Missing Servant by Tarquin Hall (Book Review) 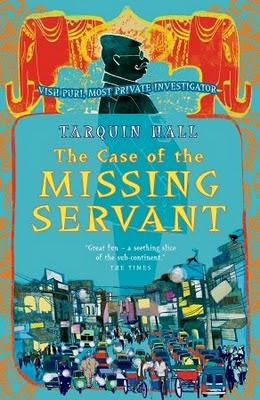 “Vish Puri, India's self-styled Most Private Investigator, is portly, persistent, and unmistakably Punjabi. Backed by his team of undercover operatives, he cuts a determined swath through India's swindlers, cheats, and murderers. When an honest public litigator is accused of murdering a maidservant, he turns to Puri for his help and discretion. It's a tough case. How will Puri trace the fate of the girl, known only as Mary, in a population of more than one billion? The search for the missing servant takes Puri on a journey that reveals not only the detective's clever methods of investigation but also modern India's vivid, seething complexity.”

Vish Puri, a private investigator living in Delhi, is a very likeable character. He will remind some readers of Columbo or Hercule Poirot, whose nattily dressed appearance conceals an analytical mind. The majority of Puri’s cases are matrimonial investigations into prospective partners. With the changes of a new modern India, detailed to provide an in-depth look at Puri and the world he lives in, families no longer know each other prior to the arranged match. Puri’s investigations reveal the personal backgrounds of the proposed husband or wife: financial, social, moral and any involvement in criminal activity.

Although Puri has been ordered by his doctor to diet, he sneaks his favourite snacks throughout the story. For those who love Indian food, the descriptions will create cravings that need to be satisfied by the time you finish reading. Or before.

Puri has honed his detective skills by using 2000-year old Indian principles of detection. He uses a variety of resourceful techniques at his discretion, such as undercover, larceny and blackmail. His operative assistants have various nicknames: Tubelight, Facecream, Door Stop, Flush and Handbrake, with a multitude of abilities gleaned from not so legal activities. Also assisting Puri are an assortment of friends in high and low places, and those he would rather not assist him: his Mummy (formidable in her own right), and his wife, Rumpi.

The story is complex, fast-paced with hilarious and touching moments while looking at Indian culture. Puri’s investigations take him from the country clubs and mansions of the wealthy classes to the squalor and poverty of the slums of Delhi and Jharkhand. In the end, Puri has done what he could with the majority of his cases closed and the missing servant located in a manner befitting Perry Mason.

Like all good mysteries it does contain a few bodies to keep the plot interesting. The violence is kept to a minimum with low graphic details, and foul language is often in Hindi. At the end of the story is a glossary containing definitions of unfamiliar Indian terms used throughout.

I was pleased to learn that there is a sequel coming, “The Case of the Man Who Died Laughing,” to continue the adventures of Vish Puri, private investigator.

A book draw will be made on July 30, 2010. For those wishing to enter please leave a comment.
Posted by Barbara Martin at 01:03

My wife, Kristina, thoroughly enjoyed this book, and can't wait for the next installment.

Sounds intersting. A different kind of lead character from what I'm used to. I should stretch my imagination in that direction.

It sounds really interesting and different.

Richard, this is one of the funniest books I've read in international culture. Tarquin Hall writes almost tongue-in-cheek about the escapades Puri and Mummy encounter complete with a punch line.

Charles, this is why I do book reviews on a variety of genres: to find methods of writing different types of characters for my own stories. Other cultures provide a wealth of information just waiting to be read and utilized.

The Indian culture fascinates me, from the British Colonial era to present.

Leah, it's well worth the read, especially to learn the delectable delights in cuisine.

This book sounds too good to pass up, Barbara. Thanks for reviewing it, and how goes your writing these days?

That looks good! I like detective stories and series on TV.
Thanks for your visit!

The cover is so charming, it makes you want to pick it. Also enjoyed your walk on the Wilcox Pass.

Rick, I'm sure this book is just the ticket for you.

Wil, this book does not disappoint in its detective mystery.

Patti, yes, the cover reflects the essence of the story perfectly.

Bernita, it is. A very nice change from the usual detective and mystery genre.

Oh, and is it true what I read on Richard's blog....that you'll be post My Town Mondays again?! yay!!!

Barrie, I'm certain you would love it!

(Yes, I'm working on a continuation of one of the history threads I left dangling.)

Trish and Rob, a great book for ecapism reading.