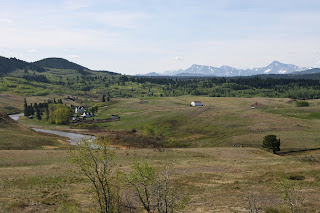 [Ranch just off highway 3 in southern Alberta - click to enlarge] 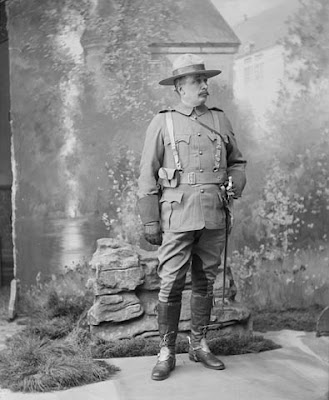 Samuel Steele in his memoir of his days on the North-West Mounted Police in what is now western Canada recounted an interesting story about a pet goose that had been caught by one of the men on the Force. During the winter the goose was fed in the barracks, and in the summer, grazed on the parade ground. There it was seen, winter and summer, until the reveille sounded. The beat of the sentry included the occasional visit to the stables, at which time the goose would squawk until he returned. On very cold nights the bird would tap on the guard room window with its beak until admitted to be warmed by the stove, and when comfortable would leave whenever someone entered or left, and resumed its watch on the flat stone by the sentry’s beat. During the day, the goose was inside the fort keeping an eye out for strange dogs, and whenever one appeared the goose immediately attacked with fierce flapping of wings until the intruder departed through the gate.[1]

In the 1880s it was common for gentlemen living in the United Kingdom to send their young men to Canada to learn farming. An absurd practice as instructors, hired to teach, did not care if the men worked or not as they were paid for board and lodging. Or they were sent out without any farming experience to begin a farm or ranch on the prairies.

While at Fort Macleod, Samuel Steele knew of a “famous, professional man” who had sent his son west with sufficient money to begin cattle ranching. A stockman was hired to build a log house and spacious corrals on the banks of stream, while the young man enjoyed himself in a neighbouring town with others of his ilk spending his financial support. To encourage his parents for more money he would send letters to them of his successful cattle ventures, which resulted in them coming for a visit the following summer to his ranch. With no cattle, despite his report as having many, he wondered what he should do. Being a resourceful sort, when his parents arrived at the log house at the ranch in sight of the snow-capped Rockies, they were given a tour of the corrals, in which were a large number of fine cattle with different brands. Nothing was suspect as brands were not used in the old land, and his father pleased with his son’s success with cattle increased his allowance and invited him home for a Christmas visit. When he stayed with his parents that winter he related that the winter had been so severe the cattle had died. Thus began a new venture in an orange grove.[2]


My Town Mondays were started by Travis Erwin in Amarillo, Texas who has handed the reins over to Clair Dickson. For other participants please visit the new location here.

Thanks for sharing the accounts from Samuel Steele's memoir, they are priceless.

These are two wonderful snippets (I love the goose story -- and I just happened to borrow FRIENDLY PERSUASION from the library, a 1955 Gary Cooper movie about the Civil War, circa 1862, and a goose has a starring role).

Luckily, Steele wrote these stories and preserved them. Would he ever guess we'd be discussing them over 100 years later in a world-wide fashion?

Two great stories! I love the idea of a "guard goose." And the story about the rich young scion was quite funny.

Kathleen, there are so many episodes in his life with the NWMP that I have to choose the shorter ones. Sam Steele may have considered his words would last a long time as the memoir was published in 1915 and he died in 1919.

Teresa, I have had 'personal' experience with geese who can be very assertive in keeping their territory safe from intruders. They are also quite strong.

I had read an article about a full grown male Canada Goose getting a man down on the ground and breaking his arm. Certainly they are birds to be cautious around.

Ah, the work we put in trying not to work.

You must tell me what to see in Toronto. We'll be there the first week in Sept. We've seen the major art galleries and similar fare. What else?

Thanks for the interesting stories! I love the one about the goose! Have a nice week.

Charles, a situation which will later turn around and receive a kick in the butt later.

Patti, for one, there is the Dead Sea Scrolls on exhibit at the Royal Ontario Museum. I will send you an email with the rest after I think a bit on it.

Wil, stories from the past are sometimes the best ones.

A resourceful person - he must have been the perfect businessman.

I love these posts. Please keep them coming.

RuneE, I don't how perfect scrounging from your parents is for several years of non-working.

I have said this before, but I really like how you are doing this long series. I love learning more and more about the whole story and seeing the pictures to go along with it!

Lauren, thank you for your kind comments. I do prefer to post one long series to avoid jumping back and forth between topics or historical eras. This allows consistency in the time line.