You Are Here: A Portable History of the Universe - Christopher Potter (Book Review) 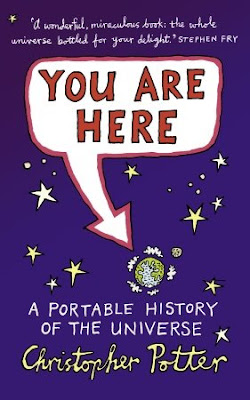 Mr. Potter has an easy way of explaining the meaning of what we call the universe. He begins with the story of how something evolved from nothing and how that something became everything, while exploring everything in between.

“We do not like to think about the universe because we fear the immensity that is everything. The universe reduces us to a nub, making it difficult to escape the idea that size matters. After all, who can deny the universe when there is so much of it? ‘Spiritual aspirations threaten to be swallowed up by this senseless bulk into a sort of nightmare of meaninglessness,’ wrote the Anglo-German scholar Edward Conze (1904—1979). ‘The enormous quantity of matter that we perceive around us, compared with the trembling little flicker of spiritual insight that we perceive within us, seems to tell strongly in favour of a materialistic outlook on life.’ We know that we must lose if we are to contest the universe.

Just as terrifying is the idea of nothing at all. A little while ago each of us was nothing, and then was something. No wonder children have nightmares. The something of our existence ought to make the nothingness that preceded life an impossibility, since we also know, as King Lear observes, that ‘nothing can come of nothing’. And yet every day in the annihilation and miraculous resurrection of the ego that is going to sleep and waking up, we are reminded of that very nothingness from which each of us emerges.”

Mr. Potter weaves an entertaining narrative following the history of early scientists and philosophers with their perceptions of gravity, life, whether the earth or the sun is the centre of the universe.

There is an interesting chapter on the original humans in Africa, including descriptions of the various types of fossils found of humans’ hominin ancestors and subspecies, like the Neanderthals. He writes in detail of the different branches of hominins related to chimpanzees, gorillas and orangutans.

This book provides current scientific thinking from quarks to galaxy superclusters, quantum physics, string theory and details are described of the different sizes of things in space until suddenly distances in the universe are understood.

The examples Mr. Potter uses to explain the infinite space and particles of the universe are wonderful, and I whole-heartedly recommend this book to others.

Sounds right down my alley. I'll have to check this one out.

we are just wee little specks, aren't we?

That seems to be the kind of book I like to read. However, the Front of the book gave an impression that it might be aimed at youngsters.

I was a loyal follower of Isaac Asimov,s Science books "in the old days" and like John Gribben today.

PS Thank you for the comments - we have bridges galore in the vicinity.

I always learn something from you book reviews, Barbara, and I have discovered some really good reads.

Thank you, Barbara,
this book jumped onto my wishlist immediately!

N.B.:
You would love Hof Castle!
If you follow the link at the bottom of my post, you will find extensive information about its history. I will post more pictures over the next days - if only I would have more time to post and visit fellow bloggers! ;-)

Charles, I liked how the bits of historical fact blended so nicely with the philosophical approach.

Gary, we are and we aren't little wee specks.

RuneE, I thought the same initially, but once I began reading the material is definitely for adults.

Debra, how very kind of you to say so. Thank you. I tend to have eclectic reading tastes.

Merisi, I'm certain you will enjoy this book. I found it entertaining to read in bits and pieces.

Oh this looks brilliant! I must definitely read this book, Barbara.

Raph, it is quite an interesting book about the universe and humans place in it.