The Anatomy of Deception by Lawrence Goldstone (Book Review) 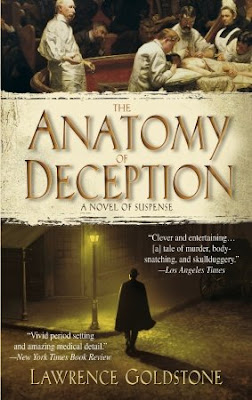 The Anatomy of Deception is historical crime fiction at its best.

It is 1889 in a Philadelphia hospital where Dr. Ephraim Carroll, among his colleagues, is witnessing autopsies conducted by their professor, the brilliant Dr. William Osler. The physicians are using the principles of analytic detection to make diagnoses and heal sickness.

To acquire a fresh supply of cadavers for dissection to teach his students anatomy, Dr. William Osler, head of Clinical Medicine at the University of Pennsylvania Medical School, is required to bribe the morgue attendant to be absent during the autopsies. There are those who oppose autopsies and seek an end to the unholy practice. During a session in the morgue an ice chest containing the corpse of a young woman, whose body had been abandoned in the street, is opened by Dr. Osler, only to be slammed shut immediately after. Dr. Carroll observes that both Dr. Osler and one of the other medical students, George Turk, are visibly shocked when they see this woman.

Who is she? How did she die? His interest piqued, Dr. Carroll soon decides to find out who the woman was, and what killed her. When one of Dr. Carroll’s acquaintances dies and is linked to the dead woman, he pursues the matter further. As his investigation into the mystery deepens he begins to uncover shocking truths.

Throughout the story there are well researched historical bits that delve into the medical discoveries to save lives such as the introduction of surgical gloves and aspirin, as well as new surgical techniques to reduce shock and infection.

There are several historical characters incorporated into the book: the artist, Thomas Eakins, scandalized by painting nudes and the primary suspect in dishonouring a socialite found dead; an innovative surgeon, Dr. William Halstead, and the pathologist, William Welch. They play important roles in the story by providing interesting background. Secondary characters to take note of are: Abigail Benedict, a lovely and wealthy woman who wins Ephraim’s heart while withholding hers; Mary Simpson, allowed to become a doctor under Dr. Osler’s tutelage, and assists women in trouble. Minor characters have their moments where they almost outshine Ephraim during his investigation: prostitutes, a Pinkerton detective, a tavern owner with his bouncer, and a police detective named Borst.

Mr. Goldstone has written his suspenseful mystery with unexpected twists, exploring areas that pose dilemmas to Ephraim: whether to follow his conscience when doing so might not serve the greater good; the limited choices of pregnant women; and the narrow-mindedness of others that makes scientific progress difficult.

I enjoyed the book, finding the author wrote excellent characters located in Philadelphia’s late Victorian high society by providing an in-depth look. His descriptions of the locale, the social etiquette of the 19th century, the interplay between medical professionals and the cultural leaders in the community are well depicted. I would recommend this book for those interested in historical crime with added suspense.
Posted by Barbara Martin at 15:00

OK, nice, just my CUP OF TEA, I shall have to look for it!

Gary, you will not be disappointed.

This book sounds great, Barbara. I'm in the middle of final papers and final exams and presentations for school now, but I will put it on my reading list for summer.

This looks like a great thriller and mystery book! I always watch "Silent Witness" and that's very interesting how pathologists can unravel a mystery and find the murderers.Thanks for this post and for your visit.

great recommendation, Barbara. My TBR stack is out of control. I want to read them all:) Love the cover here, too.

This sounds really fascinating. I'll add it to my list, too.

Teresa, this book is one you won't want to put down once you start it.

Wil, as stated in the book, the same way illnesses are discovered.

Tony, a good read to find out who the dastardly person is.

L.A., yes, my TBR stack is tottering and leaning, too. I have stacks in the lower portion of my bookcase waiting to be read after the ARCs are done. There are a couple of Robyn Young, Wilbur Smith and Jack Whyte books I've been itching to get to that I purchased as new hardcovers and have yet to read them. And another Ervin Laszlo non-fiction book. These will eventually have reviews done.

The love of reading becomes 'The Never Ending Story'.

Linda, it's a perfect book to pick up historical fact for the era.

Charles, after reading C.S. Harris you'll be all set to read this one.