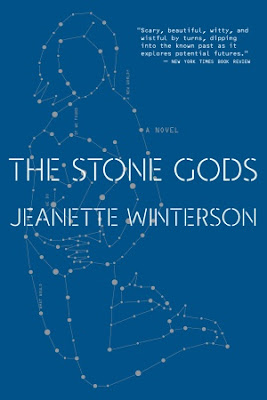 The Stone Gods is a science fiction fantasy with a particular type of prose that draws the reader in. The three stories within echo that of Robinson Crusoe: an isolated individual in a hostile world.

Billie Crusoe is a free spirit in the world of Orbus where free spirits are routinely eliminated. She lives on a farm when farms no longer exist. She reads books, has a knowledge of history where there are few books available and history is being erased by technology. Billie guides the reader through a world of materialistic greed, environmental concerns have gone by the wayside with all the resources used up resulting in the planet at the edge of self-destruction. Billie is banished to space, accused of being an activist, to be part of a mission to explore a new planet, known as Planet Blue, capable of supporting human life.

In March 1774, abandoned on Easter Island by Captain Cook ‘Billy Crusoe’ is left to face an island in decline: all the trees have been cut down to build the Stone Gods resulting in no place for the birds to roost and no wood to make boats from. The islanders are starving and will die just like the population on Orbus/Earth, each destroyed by worshipping false gods.

And the third story of a near future London after World War III where the citizens are trying to rebuild their world are in reality controlled by a corporate entity MORE. MORE has many branches and soon the citizens will be answering to a specially designed Robot sapiens with built-in consciousness to rule the world. Technology has advanced to where human reproduction has been taken over.

These complex tales about the future are far worse than we would ever imagine. There is a connection between the three stories within the book, characters with similar names occupying different spacetimes. But to reveal that connection would spoil the read for others.

Ms Winterson provides relevant concepts of today in “The Stone Gods” such as war, artificial intelligence, global warming, cosmetic enhancement, everything humans turn toward when they turn away from themselves.

An excerpt from the book:

“Manfred looked down at my notebook. He frowned his older-man-thinker-type-sexy frown. 'Billie, if you weren't so eccentric, you'd fit in better here. Why are you writing in a notebook? Nobody reads and writes any more – there's no need. Why can't you use a SpeechPad like everybody else?'

'Notebook. Pencil. They have an old-fashioned charm that I like.'

'And I like the present just as it is. You still living in that bio-bubble thing?'

'You mean the farm? Of course I am. If I'd been able to make it pay I wouldn't be working for you. But a world that clones its meat in the lab and engineers its crops underground thinks natural food is dirty and diseased.'

'Yeah. And pigs are planes. So the farm is leased to Living Museum and I am enslaved to you.'”

“The Stone Gods” is a witty and scary look at ourselves from another angle as it parallels our world in flux. The book carries a warning that if humans on earth do not start taking immediate care of our planet then we are all doomed. There may be no ‘new planet’ out there for us to resettle upon, thus eradicating our species.

I recommend this book for its wonderful insight into human behaviour and history repeating itself not only in Earth’s universe but those connecting to it.

I would really like to read this book, Barbara - it sounds very relevant to today and a good read too.

right up my alley, thx barbara :)

Phoenix, I like books that make a person think about how their circumstances might fit into those within the story.