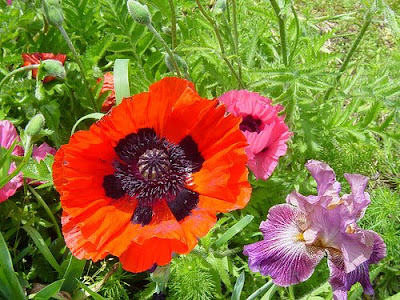 Today, 11 November, is Canada’s Remembrance Day when we honour those soldiers who died while they fought for peace during the Boer War, World War I, World War II, Korean War, and peacekeeping in various locations including Afghanistan. My great uncle was listed as missing in action in 1917 in France. My uncle, in the first group of Canadian soldiers, fought in WWII and came back a changed man.

John McCrae, a Canadian military doctor, was born in Guelph, Ontario in 1872. He was attached to the 1st Field Artillery Brigade as a field surgeon when he went into the line at Ypres in April 1915 with former military service in the South African War.

In the first week of April 1915, the soldiers of the 1st Field Artillery Brigade were moved to reinforce the Ypres salient where the British and Allied line pushed into the German line in a concave bend. On April 22, the Germans sought to eliminate this salient by using poison gas. Following an intensive artillery bombardment, they released 160 tons of chlorine gas from cylinders dug into the forward edge of their trenches into a light northeast wind. As thick clouds of yellow-green chlorine drifted over their trenches the French colonial defences and British colonial forces on either side of the Canadians crumbled, and the troops, completely bemused by this terrible weapon, died or broke and fled, leaving a gaping four-mile hole in the Allied line. A soldier in the Canadian lines discovered the neutralization of the chlorine gas was possible by pressing urine soaked rags over their noses and mouths. The Canadians were the only division that were able to hold the line.

All through the night, the Canadians fought to close this gap. On April 24, the Germans launched another poison gas attack, this time at the Canadian line. In those forty-eight hours of battle, the Canadians suffered over 6,000 casualties, one man in every three, of whom more than 2,000 died. Canadians gained a reputation as a formidable fighting force. Moreover, it was the first time that a colonial force caused a major European power to retreat.

Following the service of a friend, Alexis Helmer, McCrae penned the thirteen lines on a scrap of paper that would immortalize the poppy in his famous war time poem.

In Flanders fields the poppies blow
Between the crosses, row on row,
That mark our place, and in the sky
The larks, still bravely singing, fly
Scarce heard amid the guns below.
We are the Dead. Short days ago
We lived, felt dawn, saw sunset glow,
Loved and were loved, and now we lie
In Flanders fields.
Take up our quarrel with the foe:
To you from failing hands we throw
The torch; be yours to hold it high.
If ye break faith with us who die
We shall not sleep, though poppies grow
In Flanders fields. 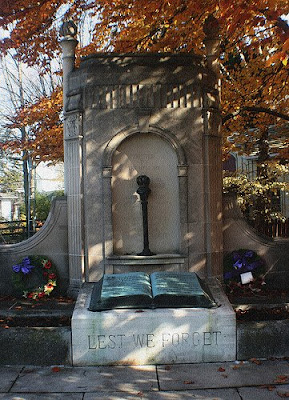 
For history buffs go to the CBC news archives link for radio and film broadcasts about Vimy Ridge and other battles: http://archives.cbc.ca/war_conflict/first_world_war/clips/14167/

Thank you for helping all of us remember.

That poem is powerful and sad.

I listen to a song sometimes by Saxon called "Broken Heroes." It nearly makes me weep for similar sentiments.

As an American, I pray this is the last Veteran's Day to see soldiers in Iraq.

Let us not forget.

Thank you for sharing In Flanders Fields, I was touched by the words. Years ago in a French class we learned a war poem, I believe it was called Gottingen. I loved the poem and this one reminds me to look for it again. Thanks also for your encouraging comments on sitting trot (over on my blog). I appreciate it!

Charles, McCrae's poem really stands the test of time. The horror of the field really comes across.

Stacey, welcome. Remembering the tragedies of wars hopefully will set minds to not starting new ones.

My pleasure to assist on improving sitting trot. For readers not familiar with riding, "sitting trot" is quite the challenge until mastered.

Nice photos with a great text...

Nice job, as always, Barbara.
We attended the small service at the cenotaph in town. Brrrrr. I miss our school assemblies, and Remembrance Day curriculum - which were wonderful.

Thank you for a well written tribute which is certainly instructive to a newish blogger!

Todays defacto 'meme' Veterans, has spawned a number of fine posts from different continents. Hope you'll visit my Hawaiian 'take' on the day.
Aloha from Waikiki-

amen, and wouldn't it be better if there were no wars?

Thanks for giving credit. An appropriate use.

I come across this poem every so often, but it means more to set the scene behind it. Thanks for the thoughtful remembrance.

Webradio, I won't ever forget.

As a young child of about 4 or 5, I was with my mother at the cafe in the Eaton department store in western Canada when I noticed a couple sitting at a table across from us. The woman had her sleeves pushed up, and with my always roving eyes noticed numbers on the inside of her left forearm. A set of 7 dark numbers. When she noticed me staring she pulled her sleeves down, and just then my mother gave me a hard nudge whispering, "Don't stare!"

On the way home my mother explained matter of factly what those numbers were and why. I've never forgotten.

Cloudia, it is very important to remember those who fought for our peace.

Tony, nice to see you up and about. We won't forget.

Gary, I wish and pray.

Martin, welcome and thank you for your wonderful poppy photo.

Clare2e, every story has another story behind it.

Barbara, if the war could disappear from our world...
This poetry is very beautiful and reminds me of another I put on my blog few days ago, there are:
" The sleeper of the valley " by Arthur Rimbaud.
Have a good day.
François.

Thank you for this. A salute to all the brave and/or crazy men and women who have put their bodies on the line for what they believed.

God bless our troops, who hold the line today against an enemy bent on the destruction of Western Civilization.

Thank you, Barbara, for such a moving piece and posting this poem again. No one should ever stop reading it.

Next time I'm in Guelph, I will stop by the memorial. I never knew where it was at before.

Thanks for an informative, moving posting.