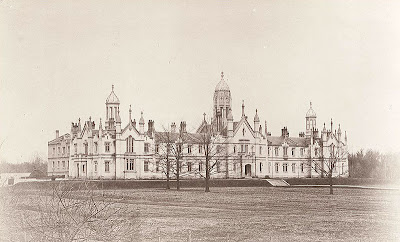 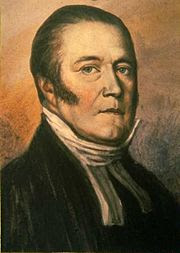 [2] In 1827, Bishop John Strachan, (photo) an Anglican deacon who arrived in Canada in 1799, received a Royal Charter from King George IV to build King's College at York (now Toronto). At the time the British Empire was being reformed along financial and religious lines, and one of the goals of the “new system” was to form churches (by way of land grants) and schools in all of the colonies. However, York was so small at the time that there were no funds available for to begin building the college, and the first classes were not held until 1843.

In 1848, the first local elections were held, and the land grants to the churches reverted to “Crown” ownership. Strachan withdrew his support for the school when, in 1849, the school was secularized and became the University of Toronto on January 1, 1850.

This action incensed Strachan, who immediately set about creating a private school based on strong Anglican lines. In 1850, the Cameron property on Queen Street, at the western end of Toronto, was purchased for £2,000, and the school was built on this site, on the west side of Garrison Creek (now buried). On 2 August 1851, the legislature of the Province of Canada passed an act incorporating Trinity College. This was supplanted by a Royal Charter for the University of Trinity College, granted by Queen Victoria in 1852. The construction work was completed quickly, and students arrived in January 1852, including some from the Diocesan Theological Institute in Cobourg, Ontario, which was in effect replaced by the newly formed Faculty of Divinity at Trinity College. 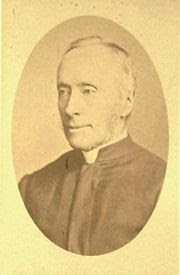 [3] The first Provost, George Whitaker, was appointed in 1852, holding office until 1880. In 1884 the college admitted its first woman student; in 1888, St. Hilda's College was created for the women students of Trinity.

The old Garrison Creek emptied into Lake Ontario at the site of Fort York, and the land north and west of the fort was set aside as a military reserve. As the town of York grew around the fort, the military reserve was gradually sold off in lots to retiring British officers and friends of the military command. British Army Lieutenant-Colonel Samuel Smith is said to have bought 1000 acres (4 km²) of land here in 1801, which he called Gore Vale after Lieutenant-Governor Francis Gore; the Vale in the name referring to Garrison Creek ravine. 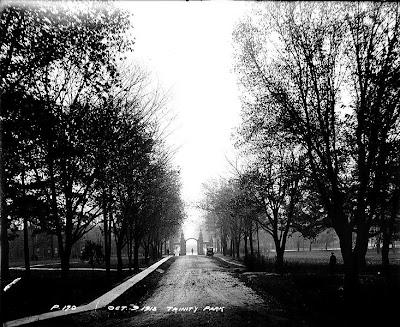 Much of the current park land was originally purchased from a Mrs. Cameron of Gore Vale in 1851 by Scottish-Canadian Bishop John Strachan, an influential Anglican deacon who wanted Toronto to have a private school with strong Anglican ties, partly in opposition to the recently secularized University of Toronto. Buildings were soon constructed and students began attending Trinity College in 1852. After federation with the University of Toronto in 1904 and completion of the downtown Trinity campus in 1925, the school left this location. The original buildings were then sold to the City of Toronto and most were demolished in the early 1950s. 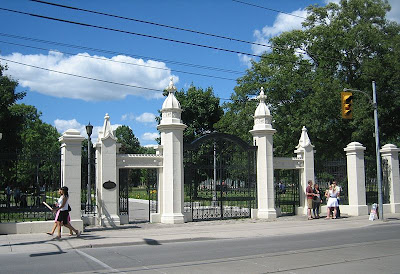 [5] Only the old gates of the college still stand, at the southern entrance to Trinity Bellwoods Park on Queen Street West. The former women's residence building for St. Hilda's students is now a home for senior citizens and overlooks the northern end of the park from the west side.

My Town Monday is the brainchild of Travis Erwin, whose weblink can be found on the sidebar. There you will find other posts about different parts of the world.

Webradio, thanks. I've been to this park in the summer to watch people play tennis.

These posts are so interesting because I know absolutely nothing about Canadian history. :P

Love your historical posts, Barbara. What a shame the old buildings were torn down.

Willow, I like many of the older buildings in Toronto including the grounds. Sometimes I don't know what the history is behind them, and when I search I find gems.

Linda, I agree. Perhaps they were in need of too much costly repair. The early 1950s were just after the Great War and money was still tight.

Thanks for another wonderful history lesson.

Terrie, I am fortunate to live in an area rich with history.

And so nice Toronto has such an artful voice to tell of it with you.

In helping my daughters study US History, we are touching on events in Canada. You know, it is interesting that with such an intertwined history, many US citizens don't know much about Canada. I'm rectifying that in my own home. Or trying to.

Junosmom, an aspect not often commented about today on the connection between the United States and Canada in the North American portion of the Seven Years' War in the mid-1700s.

If France had won the North American portion of the Seven Years’ War, more specifically, the Battle of the Plains of Abraham in 1759, Upper and Lower Canada would have been part of the Louisiana Purchase in 1803.

Loved this post because I went to U. of T. I was actually part of University College, but took a few French courses at Trinity.

What a shame that the buildings have been lost. I love the old photos!!

Lyzzydee, most old photos seem to speak to me. Its only been recently that the older buildings in Toronto have been declared Historical Sites, so they are not demolished. Instead they are refurbished and put to other uses.

There seems to be a lot of Trinity Colleges around (the only one I have visited is the the one in Dublin). No wonder of course, since they all had strong attachments to the church.

I didn't now that Toronto was initially called York - my favourite English city.