My Town Monday - The Scarborough Bluffs 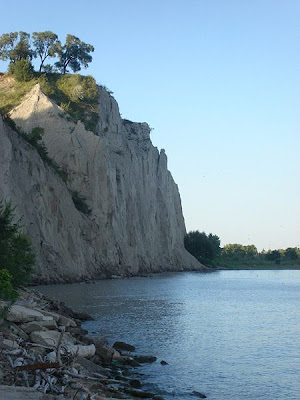 The Scarborough Bluffs are an escarpment in Scarborough, Ontario along the shoreline of Lake Ontario. The Bluffs run a distance of 14 km (8.7mi) from the foot of Victoria Park Avenue in the west to the mouth of Highland Creek in the east, reaching as high as as 65 metres (210 ft), which is the equivalent of seventeen storeys. 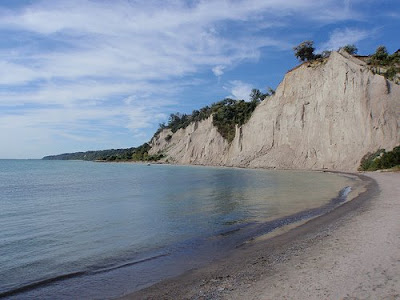 The Scarborough Bluffs are part of a much larger formation known as the Iroquois Shoreline, most of which is located further inland, running between Kingston Road and Queen Street East, pausing over the Don Valley, and continuing on the north side of Davenport Road. The Iroquois Shoreline marks the extent of a prehistoric lake, Glacial Lake Iroquois, whose level was quite a bit higher than present-day Lake Ontario's. It shrank in size at the close of the last ice age. 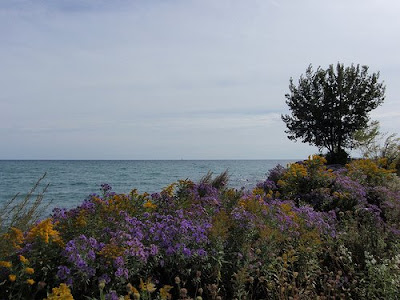 In 1793 the name of the newly surveyed township north of the Bluffs was changed from Glasgow to Scarborough at the suggestion of Elizabeth Simcoe, the wife of John Graves Simcoe, the first lieutenant governor of Upper Canada. The Bluffs along Scarborough's Lake Ontario shores reminded her of the limestone cliffs in Scarborough in Yorkshire, England. In her diary, she wrote, “The [eastern] shore is extremely bold, and has the appearance of chalk cliffs, but I believe they are only white sand. They appeared so well that we talked of building a summer residence there and calling it Scarborough.” 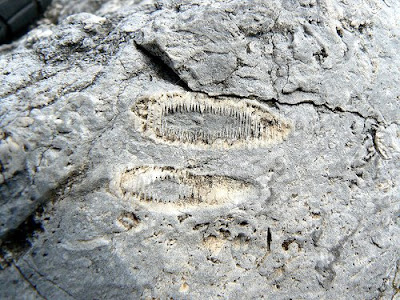 In 1796, the first land patents were issued, and the township was opened to new settlement. Some time later, settlers from the British Isles and the United States began to hew out homes here in the forests. 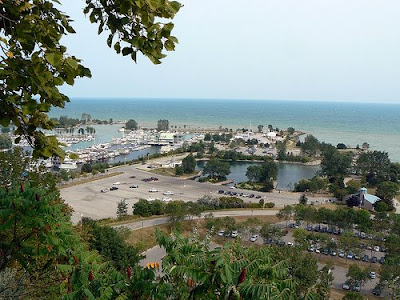 A park created from fill has been built in the lake below the cliffside named Bluffer's Park consisting of 23.4 acres, which is accessible from the foot of Brimley Road. 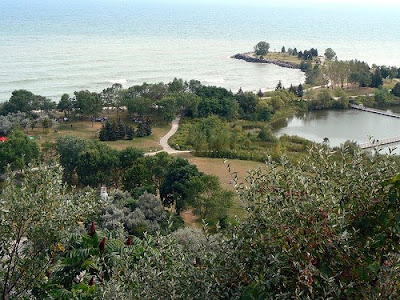 At Bluffer’s Park there is a day use park located in the south-west section which includes picnic areas, walks, lookouts, boat launching ramps, visitors dockage, parking and washrooms. 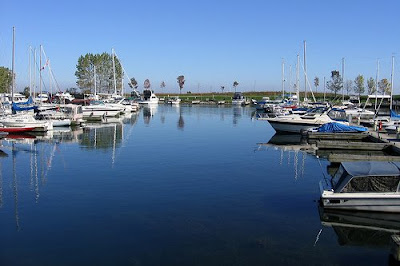 The north-east portion of the park provides secure berths for over 500 boats operated by the Bluffers Park Boating Federation. 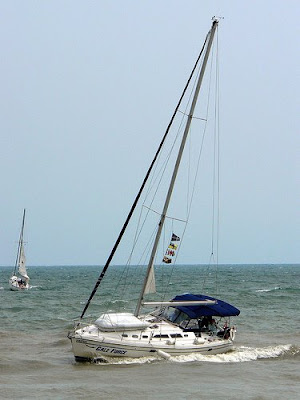 [8-Boats Coming in to Bluffers Park]

The Scarborough Bluffs have been eroding at a rapid rate since cottages were built near the edge in the 1940s and this problem escalated in the 1970s when a six-metre chunk fell off the Bluffs. Homeowners knew that erosion would occur, but the waterfront views were enticing enough to settle there, which led to a housing boom along the Bluffs, which was responsible for the accelerating rate of erosion. Even as recently as summer 2008, chunks of the Bluffs had eroded to the point that one quarter of a cottage that the late actor and comedian Billy Van once owned is left hanging on the cliff; the cottage is deemed a safety hazard by Scarborough city officials as a result. To combat erosion, boulders acting as armour rocks and trees were placed at the base. However, to place these rocks and plant trees, a beach must be created to allow trucks to access the cliff base, which would involve levelling parts of the Bluffs, such as the aforementioned Bluffer's Park. 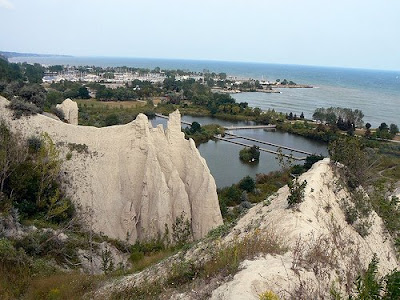 The Cathedral Bluffs has tall spires of eroded sandstone cliffs that rise more than 90 metres above Lake Ontario, the highest point along the Bluffs. 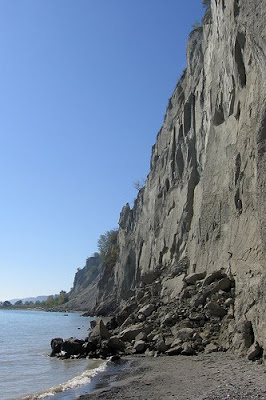 Wow, the Bluffs are stunning. Thank you so much for these great looks at your beautiful country (at least your part of it :-)

Debra, my pleasure to do so. I've been to the Bluffs a couple of times, and it reminded me a little of the White Cliffs of Dover in England.

Those fossils are cool. They look very big but I'm not sure how you had your camera set. Great bluffs too.

Soil erosion is a natural phenomenon - on the other hand it is in many cases added to by human activities; as you have shown.

The Danes has had that problem for centuries and has found many ways to combat it.

Thank you for showing us around!

It looks wonderful and so calm. I think that this place gives a sensation of peace.

What a great informative post, Barbara. I'm finding there's so much I don't know about Toronto!

You are certainly Canada's most persuasive voice for a trip there.

Thanks for the tour~ I've visited a very small portion of the south side of the Lake. I'd love to visit the area that you shared!

I love the look of those cliffs bordering the water.

I'm guessing the rock is somewhat soft, like a lime or sandstone. Am I right?

What a beautiful area. Thanks for the interesting post and great pictures.

I've been to the Bluffs...I used to work not far from there. :) Great shots.

Great research, again, Barbara.
What are your thoughts on the proposed wind turbines?
We are having municipal/provincial arguments around here regarding the hydro dam rebuilding project that follow the NIMBY syndrome.

what a beautiful location

The Tourism Board really ought to slip you a little something. You do a better job than they do!

Oh, that is beautiful Barbara! It is too bad that people don't consider the reason behind there being a cliff there in the first place before they build.

Barbara, The beauty from your country never ceases to astound me.

Charles, I found the properties to the camera. Hope this helps with your query.

RunE, humans certainly cause all kinds of trouble for themselves. Here, although they knew of eroding before the houses were built, they still went ahead.

Dark Wolf, in these photos it is quite calm. However, when storms blow up across Lake Ontario the water can become very rough. I have seen the waves reach nearly 3 to 4 feet high before they crash against the rocks. Then it sounds like you're at the ocean.

Barrie, there are many things I don't know about Toronto either. These posts are closing that gap for me.

Mary, I could tell you stories about the Bluffs but I'll save that for a future post.

Bernard, they do have a distinctive appearance.

Travis, bingo on the sandstone.

Linda, a place to dream on.

Jenny, the Pickering Nuclear Generating Plant has to go soon before it blows up.

Lindy, it is a nice place to go for a picnic.

Steve, I only post about the locations I frequent or have wanted to see.

Reb, money and exclusivity seem to be the culprits here.

David, you need to come up for a visit to see it first hand.

I could really get lost there. So beautiful.

L.A., getting lost might be easier than you think. What if there was a metaphysical corridor near the bluffs? Would you venture in?

Comprehensive post on the Bluffs. And like always a beautiful series of pictures to portray the town. I liked this a lot...Thomas

This should be good to walk on the cliffs and watch the see off...

That sandstone cliffs are overwhelming! Thank you for the tour! :)